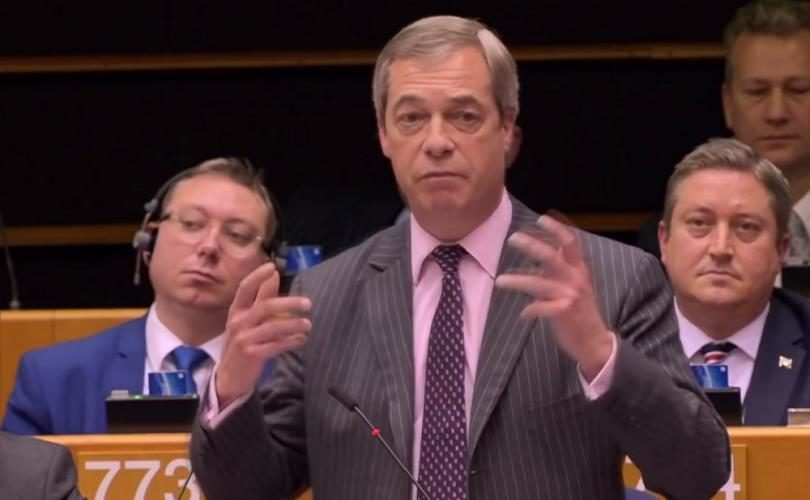 May 10, 2021 (LifeSiteNews) — One of the world’s leading voices for nationalism and populism is bringing his message to the United States. Nigel Farage, a former member of the European Parliament and key figure in getting the U.K. to leave the European Union, kicked off his “America’s Comeback Tour” earlier this month, on May 4.

The tour, which lasts until May 29, will see the Brexit advocate visit nearly a dozen U.S. cities, including Dallas and Phoenix.

According to a press release, the trip seeks to “restore America’s founding principles” at a time when Joe Biden is attacking the country’s most basic freedoms.

Ron Armstrong is co-founder and board member of Stand Up Michigan, a grassroots organization that’s spearheaded efforts against pro-abortion Democratic Governor Gretchen Whitmer. He said the timing for something like this couldn’t be better.

“Nigel’s patriotic, anti-globalist message should resonate with all freedom-loving Michiganians as they continue to fight a tyrannical Governor using her executive power to opress the very people she promised to serve when she took the oath of office.”

“It’s time the great people of Michigan Stand Up, like Nigel has, and told those who are in positions of authority to get lost and to reclaim their sovereignty.”

LifeSite will be in attendance at the Grand Rapids, Michigan, rally, which will be held at the DeltaPlex at 7 p.m. on Friday, May 14. LifeSite is expected to speak with Farage, a vocal critic of coronavirus restrictions across the globe, about the tour and other current events. Stay tuned for a full video report of the evening’s activities.