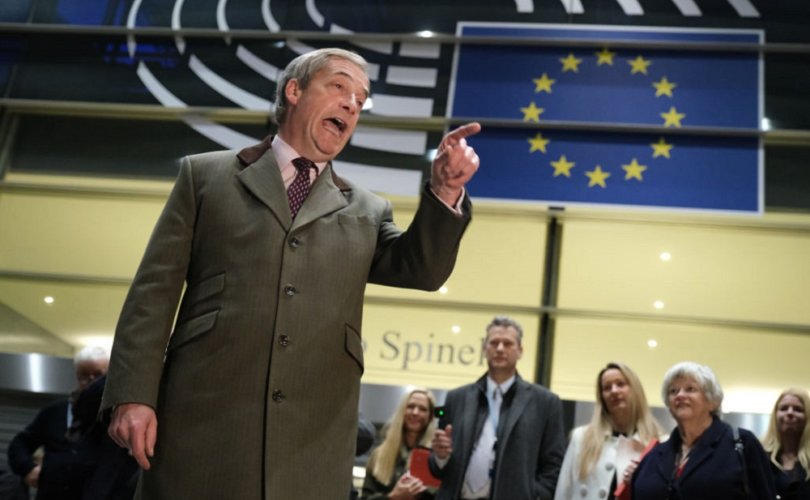 UNITED KINGDOM, September 22, 2020 (LifeSiteNews) – Nigel Farage, the leader of the U.K. Brexit Party, has said the United Kingdom government is acting like an “elective dictatorship” and made clear he firmly opposes the idea of a second national coronavirus lockdown.

“We are supposed to be living in a democracy. Actually, it’s becoming increasingly like an elective dictatorship,” said Farage in a YouTube video message posted Sunday.

“I think the time has come for us to say, loudly and clearly, no to a second lockdown.”

Farage said the reality is, everyone needs to “learn to live with” the coronavirus, adding that a second lockdown in the name of combating the disease would be a “catastrophe.”

“I know people who’ve had this and have suffered from it, but equally, I know lots of people who had it and have barely even known. It’s barely registered until they’ve had the antibody test,” said Farage.

“The absolute truth is, we have got to learn to live with this disease. Like everybody, I’d rather it hadn't escaped from China, but it did. … Another second national lockdown will be a complete and utter catastrophe.”

Farage made the video after U.K. prime minister Boris Johnson and his administration announced on Sunday fines of up to £10,000 for anyone who breaks a mandatory self-isolation order. The fines take effect on September 28.

The U.K. also recently introduced a ban on social gatherings of more than six people after an apparent rise in positive cases.

Farage blasted the fact that the Johnson government is introducing the new rules by ministerial order and without parliamentary consent.

In his Sunday YouTube message, Farage said that those who have chronic health conditions and the elderly should isolate but added that “the cure” has become “worse than the disease itself.”

Farage blasted the negative effects the lockdown measures have brought upon people’s routine medical treatments. He also brought up reports of increasing domestic violence and suicides because of coronavirus-imposed restrictions and warned that a second lockdown could bring about mass unemployment.

“Just think of all those tens of thousands of cancer diagnoses that haven’t happened, the number of people with chronic heart conditions who simply haven’t been treated. And goodness knows what the effect on millions of people is in terms of their mental health, their well-being,” said Farage.

“Domestic violence, suicide — that it’s really is a list as long as your arm, and now, of course, as we go back into effectively a second lockdown, at the specter of mass unemployment becomes all too real.”

Farage then urged people to become vocal and demand from their local members of Parliament (M.P.) that a “functioning democracy” in the U.K. be restored.

“Don’t think this is a waste of time. It’s not. Lobby your M.P. and ask two things of them: firstly, to stand out loudly this week in Westminster and to say we must not have a second national lockdown, and secondly, to insist that rule by ministerial decree comes to an end and we get back to being a functioning democracy,” said Farage.

Farage played a pivotal role in ensuring that the U.K. made good on its voters deciding in 2016, by a small majority, that their nation should leave the European Union (E.U.).

On Tuesday, Johnson stopped short of a full second coronavirus lockdown but announced new restrictions that take effect on September 28, which he said could last “perhaps six months.”

In place are curfews on restaurants and pubs starting at 10:00 P.M., masks are now mandatory for retail workers and staff at bars and restaurants, and customers must wear them if not seated at a table.

Also, weddings are now limited to no more than 15 people, and funerals are capped at 30 participants.

Johnson also stated he would provide local police forces with extra funding to enforce the new regulations, with the possibility of using the U.K. military if needed.

Farage spared no time in blasting Johnson for his new restrictions on Twitter, saying this is not what people voted for.

“The PM says we are a ‘freedom loving country’, but will fine you £10,000 and send the army in if he likes. This is authoritarian — I don't believe his promises on testing or the competence of the government. We didn’t vote for this,” wrote Farage on Twitter Tuesday.

Johnson’s new coronavirus restrictions apply only to England, but he said “similar steps” will follow in Scotland, Wales, and Northern Ireland after speaking with their leaders.