Abortionist Steven Chase Brigham was in a New Jersey court on Friday seeking to persuade a judge to allow him to keep his last remaining medical license, which is currently under suspension after the discovery of his secret illegal bi-state late-term abortion scheme in 2010.

“'Good faith’ and ‘Brigham’ are two terms that don’t belong in the same sentence. Brigham has such a sordid – and heavily documented — history of abortion abuses, crimes, and deceptive behavior that it’s hard to believe that any judge would need to spend more than five minutes on a decision to revoke his license,” said Troy Newman, President of Operation Rescue. “If you think Kermit Gosnell was bad, Brigham is much worse in many ways, because he has extended his corrupt organization and slovenly abortion practices to a chain of mills that has allowed him to exploit women in at least eight states at one time or another.”

The current case against Brigham began when he initiated a 22-week abortion on an 18-year old teenager, known in court records as D.B., at his Voorhees, New Jersey, abortion facility, even though he was not permitted to do abortions there after 14 weeks.

According to interview transcripts and other records obtained by Operation Rescue, Brigham then led a caravan of patients, including D.B. and her mother, to what one of his employees described as a “secret late-term abortion clinic” that he operated in Maryland even though he has never been licensed in that state. There, under his supervision and with his assistance, Brigham’s associate, Utah abortionist Nicola Riley, began a Dilation and Evacuation dismemberment abortion on D.B. that resulted in uterine perforation and a pulled bowel. 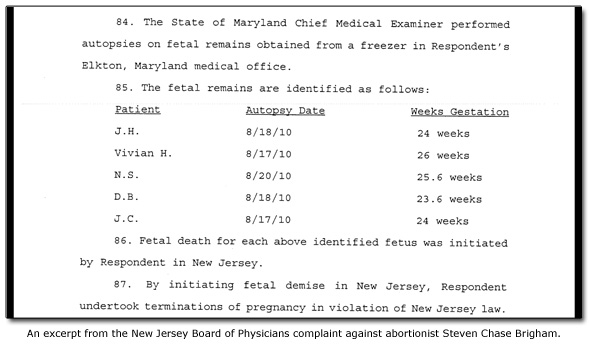 So horrific were D.B.’s injuries and so suspicious was Brigham’s behavior when they finally transported her to a nearby emergency room in the back seat of his rental car, that hospital staff notified the police and filed a complaint with the Maryland Board of Physicians. Police who raided Brigham’s “secret” Elkton abortion facility discovered the remains of 35 late-term abortion babies in a bloody freezer.

The New Jersey Board of Physicians suspended Brigham’s license, stating that his “continued practice presents a clear and imminent danger” to the public. He was arrested on murder charges in Maryland related to the late-term baby remains, but those charges were later dropped after a witness withdrew from the case.

Friday’s 2½ hour hearing was for the purpose of presenting mitigating evidence before a final ruling is made on the fate of Brigham’s license. A full disciplinary hearing lasting several days took place last October.

The State Attorney General’s office, which is seeking the revocation of Brigham’s medical license, asked Judge Masin to consider several facts about Brigham’s checkered history, including his license revocation in New York and actions in Pennsylvania, which not only revoked his license there but have also banned him from owning abortion businesses in that state.

However, in a surprising move, Judge Masin denied that request.

Masin noted that after the New York revocation, a New Jersey judge disagreed with the New York findings and allowed Brigham to keep his New Jersey license. Masin also noted that since the Pennsylvania case is still in litigation, he would not consider it in making his decision.

Gorrell attempted to downplay the Pennsylvania case as “selective enforcement,” portraying Brigham as a victim rather than a victimizer, as Operation Rescue believes the evidence overwhelmingly supports. However, Masin appropriately rejected that line of defense.

After the hearing Gorrell took the fictional victimization of Brigham to new lows when he told reporters that his client is an “easy target for pro-life advocates.”

“It is only because of Brigham’s own reprehensible behavior that he faces legal problems he has today,” said Newman. “He has no one to blame but himself. It would be a huge miscarriage of justice if he was allowed to continue inflicting his quackery on women.”

Judge Masin’s recommendation, which is expected soon, would then go to the full Board of Physicians for approval.

But unfortunately, even license revocation may not affect Brigham’s American Women’s Services chain of 11 abortion facilities currently operating in New Jersey, Virginia, and Florida. Those facilities will likely remain open and lining Brigham’s pockets with the help of other abortionists of dubious character that have been employed by Brigham.

“Brigham’s abortion business is a haven for the bottom of the barrel criminals and quacks masquerading as medical doctors, and that’s just the unvarnished truth,” said Newman. “We have reviewed hundreds of pages of disciplinary documents. Every medical misfit on the east coast that has run out of options seems to have found a welcome home in Brigham’s abortion organization.”

Whether or not Brigham’s New Jersey medical license is finally revoked, Operation Rescue vows to continue to work toward bringing Brigham’s abortion empire to an end.

“As far as we are concerned, our job isn’t done until Brigham is out of the abortion business for good and every one of his seedy abortion mills is closed through peaceful, legal means,” said Newman.

Last call - Keep this news available to you and millions more