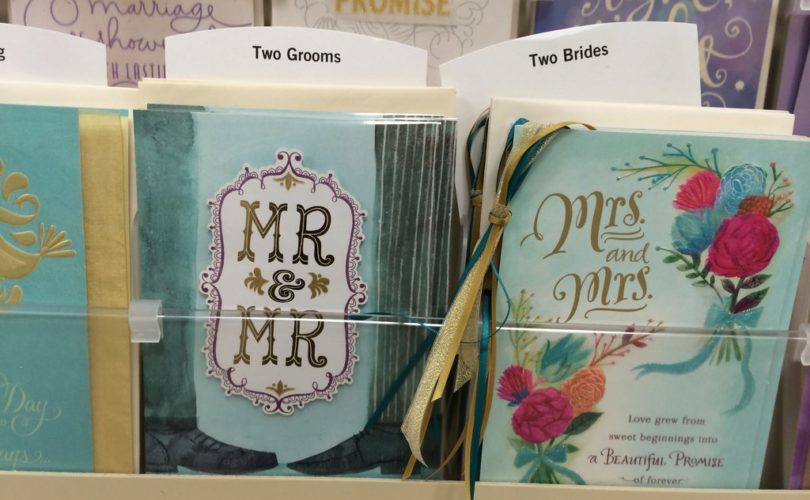 Brigham Young University, the flagship school of the Church of Jesus Christ of Latter-Day Saints (LDS), has pulled a series of Hallmark cards celebrating same-sex “marriage” from its bookstore shelves after images of the cards were posted to social media.

The cards, reading “Mr. and Mr.” and “Mrs. and Mrs.,” were removed because the university’s honor code forbids homosexual behavior, in keeping with LDS teaching that such behaviors are immoral.

“Homosexual behavior includes not only sexual relations between members of the same sex, but all forms of physical intimacy that give expression to homosexual feelings,” the code states.

The cards’ appearance at the BYU bookstore was blamed on an outside vendor who was unfamiliar with the honor code.

“This was just someone stocking the shelves who wasn’t aware,” BYU spokesman Carri Jenkins told USA Today. “We’ve been able to work with them.”

The LDS church has been active in the fight against legalized same-sex “marriage,” spending millions of dollars on publicity campaigns in multiple states supporting true marriage between one man and one woman.

BYU is located in Utah, where same-sex “marriage” was declared legal by court order in December of last year.

That decision has been stayed pending appeal, but an estimated 900 same-sex couples obtained marriage licenses in the few days before the stay was granted, causing legal chaos as the state struggled to determine whether they must acknowledge those “marriages” as valid.  While the federal government considers them valid, the state disagrees.

The matter is expected to be ruled on by the Supreme Court when it reconvenes in the fall.