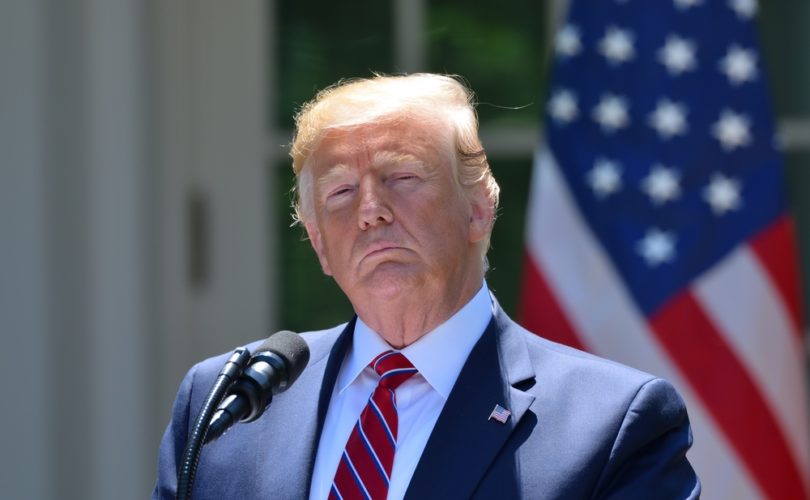 In London, England, John Smeaton, Director of the Society for the Protection of Unborn Children (SPUC), told LifeSiteNews that the decision was “brilliant and brave.”

“This is a brilliant and brave move from President Trump,” Smeaton said via email.

“Not only has the World Health Organisation been planning for years to promote abortion in a COVID-19-type pandemic, it has become abundantly clear even to the secular world that the WHO is serving the world’s most corrupt power structures rather than the common good.”

Smeaton noted that British media and researchers have also noted that the WHO’s flawed response to the Chinese outbreak of the virus cost lives.

“As The Times leader stated (9 April), the WHO ‘is failing in testing times… Taiwanese officials, who are ignored by the WHO at China's behest, sounded the alarm on December 31 that the virus could be transmitted from human to human. Two weeks later, under pressure from Beijing, the WHO stated the opposite to be true. A declaration of a global pandemic even then would have saved lives but it took another week to announce an emergency on January 30. The University of Southampton suggested that cases might have been reduced by 95% had China acted three weeks earlier,’” Smeaton recalled.

Also in London, Maria Madise, SPUC’s International Director, told LifeSiteNews that Trump had shown “real political courage and leadership.” She added that WHO had been using the tragedy to push its anti-life, anti-family agenda.

“This is a brilliant and most welcome move by the U.S. President,” Madise said via email.

“Apart from WHO's scandalous delay in reporting on the extent of the outbreak of coronavirus in Wuhan followed by giving inconsistent advice, WHO has used this crisis to aggressively advance its attacks on the inviolable rights of life and the family under the guise of tackling the pandemic,” she continued.

“Prompted by COVID-19, WHO is working on classifying abortion as an ‘essential health service’ so that abortion could go on under lockdown. Drugs used in medical abortion were already listed as ‘essential medications’ by WHO in 2017. Now, in light of restrictions with entering health facilities, they promote home abortions with these drugs, which is terrible and deadly advice that some governments have sadly followed in their guidance.”

Madise reminded LifeSiteNews that WHO’s executive director of emergencies program, Mike Ryan, had revealed that WHO officials might begin entering homes to remove family members who are sick.

“Since WHO's first director, Dr Brock Chisholm, wrote in 1948: ‘Children have to be freed from… religious and other cultural “prejudices” forced upon them by parents and religious authorities,’ WHO’s anti-life and anti-family track record has not improved,” she said.

“Policies against life and the family are inevitably policies against health and should not be funded by countries who value life and the family. The U.S. has been the biggest donor to WHO and President Trump is absolutely right that the hundreds of millions of American taxpayers’ money that WHO has been receiving could be put to a much better use.”

Father Frank Pavone of Titusville, Florida’s Priests for Life also paid tribute to Trump’s action, saying it was a contrast to the “failed leadership” of a Democrat rival.

“President Trump’s withholding of funds from the WHO is yet another in a long series of decisive, courageous decisions in dealing with [COVID-19] and in protecting Americans and their families, in sharp contrast to the failed leadership of Joe Biden,” Pavone told LifeSiteNews.

“The President is a strong believer in fairness and accountability. Whether it is trade deals, NATO membership, or funding of the WHO, he insists that those who pay know what they are getting into, that other nations have to do their fair share and not take unfair advantage of America, and that other nations and national bodies have to be able to answer for their actions to those who support them,” he continued.

“The WHO receives between 400 and 500 million of our taxpayer dollars, as compared with about a tenth of that coming from China. America is the largest contributor by far. Therefore, it is only right that the President has decided that while a review is done of how the WHO has handled this coronavirus, America should withhold the funds at least until there is more clarity.”

Pavone said that Biden, by contrast, “has cozied up to China, and even criticized President Trump as ‘xenophobic’; when, in an act that saved many thousands of lives, President Trump did what had never been done and closed off travel from China at the end of January to protect Americans from the virus.”

“Thank God that the one making these difficult and life-saving decisions is President Trump and not Mr. Biden,” Pavone concluded.

Head of WHO ‘very connected to Western pro-abortion elites’

Dr. Susan Yoshihara of the Center for Family and Human Rights (C-FAM) in New York told LifeSiteNews that she believes the defunding of the WHO is a “great opportunity for pro-lifers.”

“The latest crisis shows that what WHO has failed to do is focus on basic healthcare,” she said, and mentioned in particular the WHO’s failure to honor commitments to solve the problem of high numbers of stillbirths and neonatal deaths in countries that lack basic health care.

Currently 2.6 million children are stillborn every year, and 2.5 million die soon after birth. Some of the WHO committees that are ignoring the stillbirth tragedy are the same ones that promote abortion, Yoshihara told LifeSiteNews.

Yoshihara said that C-FAM was “very wary” of Tedros Adhanom, the current Director-General of the WHO, from the beginning “because he used his position in Ethiopia to promote abortion” and was not surprised when he continued to promote abortion within the WHO.

As for political action regarding WHO, she said that there should be an international response.

“I think we need politicians all over the world to take the opportunity to promote basic health care,” she said.

Hugh Brown, Executive Director of the American Life League in Stafford, Virginia, also stressed the pro-abortion leanings of the WHO.

“The WHO states on their website: ‘Access to legal and safe abortion is essential…’ for women and the protection of their reproductive rights. An organization that claims to support the health and well being of people around the world is simply just another arm of the global demonic apparatus that lusts for the death of babies in the womb,” Brown told LifeSiteNews by email.

Brown also drew a connection between the WHO and the Chinese government.

“The WHO has also now clearly shown itself to be an organizational lackey for the evil Chinese Communist regime and bears tremendous culpability for the spread of Covid-19 and the resulting death and suffering of people around the world,” he wrote.

“The American Life League applauds our courageous President for stripping them of every single United States tax dollar,” he continued.

“The WHO does not deserve a dime from the American citizenry and we thank the Lord for placing a no nonsense leader in the White House for such a time as this.”

Jeff Gunnarson of Campaign Life Coalition, based in Toronto, Canada, called for the WHO to be “shuttered.”

“We are heartened to hear of the possible de-funding, by the US government, of the mother of all abortion supporters, the World Health Organization (WHO),” he told LifeSiteNews by email.

“When a health organization that is designed to monitor the physical well being of the globe's citizens but ignores the cries of the unborn, it's critical that not only should they be defunded but shuttered,” Gunnarson continued.

“The world would be a much better, safer and healthier planet if we re-booted this politically-correct, corrupted, bureaucratic institution and instead build a morally cohesive group consisting of practicing doctors, scientists and medical researchers who all at once are motivated by love of God and neighbour and strive to uphold the dignity of every human being from conception to natural death.”

“Then it may reach its intent to hold to its mission of ‘the attainment by all peoples of the highest possible level of health,’” he concluded.

Not everyone is thrilled with Trump’s decision. Today pro-abortion billionaire Bill Gates tweeted: “Halting funding for the World Health Organization during a world health crisis is as dangerous as it sounds. Their work is slowing the spread of COVID-19 and if that work is stopped no other organization can replace them. The world needs @WHO now more than ever.”