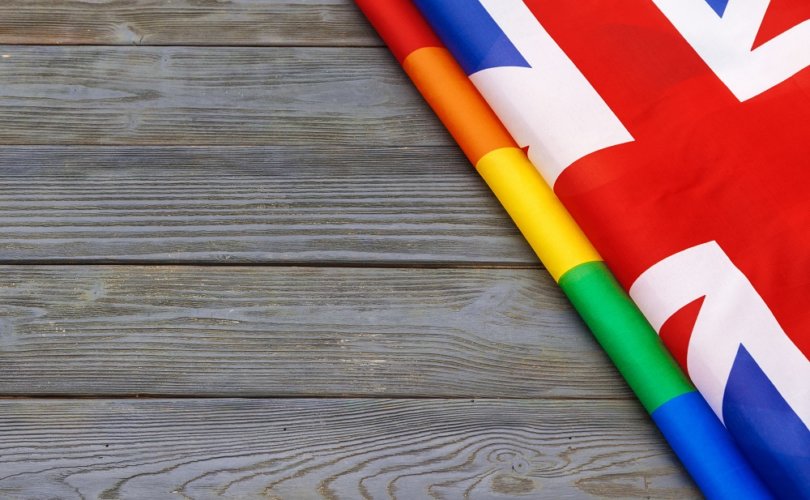 LONDON, July 11, 2019 (LifeSiteNews) — According to the newest British Social Attitudes Survey, Britons’ acceptance of homosexual activity has declined for the first time since 1987 and the onset of the AIDS crisis.

In 1983, the British Social Attitudes Survey (BSA) found that eight out of every 10 persons surveyed considered sexual relations between persons of the same sex objectionable. Until now, the number of Britons who are indifferent or accepting of sodomy has increased. The latest survey, however, found that the number of Britons accepting sodomy as normal has fallen. According to the latest numbers, about one third of those surveyed are opposed to sodomy. The study has been conducted since the 1980s to study longitudinal changes in social attitudes.

“The liberalisation in attitudes to sexual relationships observed since first recorded by BSA in the 1980s appears to be slowing down,” said the National Center for Social Research, “perhaps reflecting the marked divides between the attitudes of religious and non-religious people in this sphere.” The study acknowledged, “While social norms have changed, there is a significant minority of the population who remain uncomfortable with same-sex relationships and as such we may have reached a point of plateau.” Researchers said that while there remains “some way to go” in the public’s acceptance of transgenderism, they expect opinions to change. The survey showed a “marked divide between the attitudes of religious and non-religious people.”

In 2017, the acceptance of homosexuality among Britons reached a high of 68%. In the newest study, that number dropped to 66%. The study also examined respondents according to their professed religions, finding a significant difference among non-believers, Christians, and people of other faiths. For example, 93% of non-believers have no objection to pre-marital sex, while only 66% of Christians and 35% of those professing other faiths thought likewise.

The research showed that 73% of respondents not affiliated with a religion believe that same-sex couples should be able to have a civil partnership, as compared to 67% of Anglicans, 59% of Catholics, 58% of “other Christians,” and 34% of people of other faiths.

Social and religious conservatives in the U.K. have become more outspoken in their defense of marriage and traditional values. For example, protests flared again this week at the Parkfield community school in Saltley, Birmingham, in the British Midlands. In March, parents removed their children from the school for a day in protest against what they see as the teaching of homosexuality and transgenderism. The “No Outsiders” curriculum, written by Birmingham teacher Andrew Moffat, has been divisive, especially among Muslims, who contend that the Koran strictly forbids homosexual behavior. Police have been called in to lessen tensions in and around the school, while parents contend that the objectionable curriculum is “brainwashing their children to be gay.”

Back in 1983, the BSA found that two-thirds of Britons described themselves as Christian. The more recent study shows that the number has dropped to 38%. Researchers found that 46% of respondents agreed in 1993 that “we believe too often in science, and not enough in feelings and faith.” That figure now stands at 27%. The study also found that 52% of respondents have no religion at all, while 21% give a vote of no confidence in churches. Also, only one in 100 young adults between 18 and 24 regarded himself as a member of the Church of England, evidencing continued decline for that organization.

Concomitant with their Anglican counterparts, the numbers of Britons identifying as Catholic dropped from 10% in 1983 to the current 7%. Other Protestant confessions have also dropped in numbers. The number of non-denominational Christians, including Pentecostals, rose from 10% to 13%.

The number of Muslims increased from 1% to the current 6% percent over the same period.

The pro-life, pro-family Christian Institute has sought to fend off the LGBTQ agenda in the United Kingdom. According to Daily Mail, Ciarán Kelly, the deputy director of the group, said there is “increasing pressure on people who are happy to tolerate sexual relations between adults of the same sex to endorse or celebrate it.”