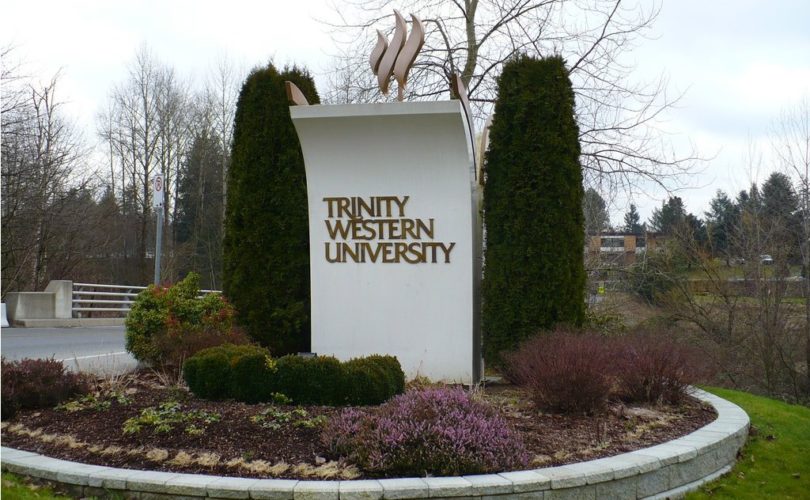 The B.C. Law Society has virtually ensured that the fate of Trinity Western University’s proposed Christian law school will be decided in the courts, and probably the Supreme Court of Canada, by reversing its decision to approve the school on the grounds that it discriminates against homosexuals in its code of conduct.

But TWU spokesman Guy Saffold told LifeSiteNews the Law Society was itself guilty of discrimination, and a former attorney general of British Columbia agrees with him.

“What we have here is a popular vote to extinguish minority rights,” Saffold said. But he said it would probably take the university at least a week to decide whether to take the B.C. Law Society, or one of the other provincial law societies that have taken the same action, to court.

The Benches’ decision means that graduates from the law school will not be eligible to practice law in the province.

The decision followed this month’s referendum of the entire membership and a vote of a special general meeting, which both went against TWU by three to one.

As for the Benchers themselves, they had overwhelmingly decided in TWU’s favour a year ago on the objective merits of its faculty and proposed curriculum. Since then a fierce gay lobby in this and other Canadian provinces persuaded the memberships of their legal professions that TWU’s “community covenant” meant its law school would have to be discriminatory. The covenant requires all students to promise to follow a Christian code of conduct, including abstaining from extra-marital and homosexual activity.

Saffold admitted, “It would be very difficult to operate a law school without being able to hold out to students the promise they could serve as lawyers” in their home province.

The vote by the law societies in B.C., Ontario, New Brunswick, and Nova Scotia flies in the face of the Supreme Court of Canada’s decision in TWU’s favour in the 2001 B.C. College of Teachers case. The college, as the professional body governing the public school teaching profession, disapproved Trinity’s application for degree-granting status for its education faculty. Again, the community covenant was advanced as evidence of discrimination, but the B.C. Appeal Court and Supreme Court of Canada both ruled that discriminatory acts, not beliefs, were required to make a case against TWU.

Today, TWU’s opponents argue that the cause of sexual equality is so important that evidence of actual discrimination should no longer be required. Ignored by these opponents is the Charter of Rights and Freedom’s protection for freedom of religion, conscience, and thought.

Quick to condemn the Law Society’s decision was B.C.’s former attorney general, Geoff Plant. “If being tolerant means we all have to think the same, I think we’ve lost something,” he told LifeSiteNews. Plant said the benchers got it right the first time when they accepted Trinity Western University’s law school on the basis of its capacity to “competently train lawyers and teach them respect for the law.”

But the law society’s general membership, in overruling the benchers, “are privileging equality rights over religious freedom. That’s unfortunate.” Plant believes the Supreme Court of Canada already struck the right balance in the Trinity Western University versus the B.C. College of Teachers decision in 2001. “They made a distinction between conduct and thought, and ruled for Trinity Western because there were no examples of discriminatory conduct.”

Plant added that TWU could usefully point, in court, to its hundreds of education graduates who have gone on to teach in B.C. classrooms without complaint of sexual discrimination. (Saffold confirmed this. “I know of no complaint against any of our education grads. On the contrary, they are eagerly sought after.”)

But Plant, while he called the Law Society “arrogant” for thinking it knows better than the Supreme Court, admits he is not confident in the highest court’s willingness to be bound by its own decisions. “They are sympathetic to the argument that ‘the times have changed,’” he told LifeSiteNews. “They are willing to change their minds on the basis of principles that aren’t written in the constitution.”

Plant cited an ongoing, prominent case involving the B.C. government unilaterally changing its collective agreements with public unions. “On the basis of the previous 20 years of case law, we [the government] argued there was no constitutional right to bargain collectively,” Plant said. “The Supreme Court decided that the world had changed and collective bargaining needed to be protected.”

But Plant is sure of his principles. “I don’t believe we should tolerate intolerance, but pluralism means allowing and even welcoming a diversity of viewpoints and that ought to include law schools that teach from a variety of perspectives, including religious ones.”