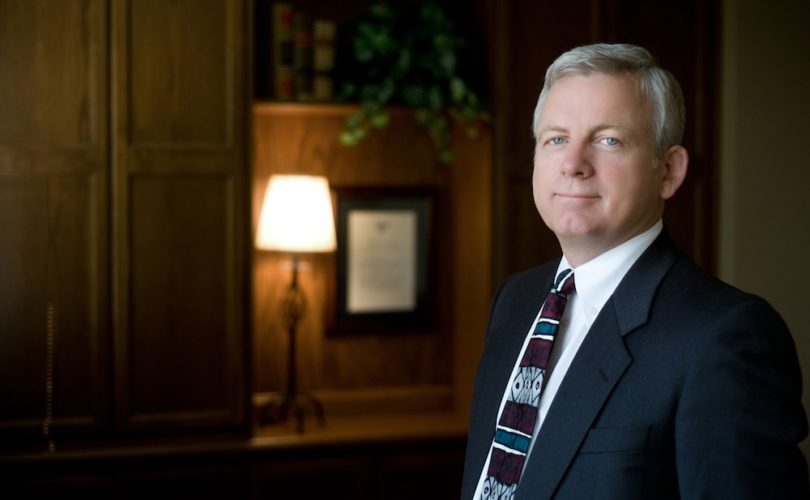 LANGLEY, BC – In the on-going battle to have its law school approved, Trinity Western University encountered another roadblock Tuesday when lawyers at a special meeting of the Law Society of British Columbia called for a reversal of the society’s April 11 decision to accredit the school.

In a vote of 3210 to 968 by teleconference, the lawyers passed a non-binding resolution to direct the board of governors of the law society, termed Benchers, to rescind their decision.

TWU President Bob Kuhn said that the accreditation of a law school should not be a popularity contest.

“Difficult decisions involving fundamental rights and freedoms should not be decided by popular opinion,” he said.

“In April, the LSBC Benchers made their decision, in a 20 to 7 vote, after the thoughtful and measured expression of views and careful consideration of reports and submissions, and the judgment of the Supreme Court of Canada in 2001 SCC 31. The thorough process taken by the LSBC should not be undermined by a vocal group that organizes a special general meeting,” Kuhn said in a statement.

While the resolution is not binding on the Benchers and does not legally compel them to reverse the April decision, the law society’s president said they would consider the motion.

“The decision regarding whether to admit graduates from the proposed law school at TWU is a Bencher decision,” president Jan Lindsay told CBC. “However, the Benchers will give the result of [Tuesday's] members' meeting serious and thoughtful consideration.”

The opposition to the proposed law school stems from TWU’s Community Covenant in which students voluntarily pledge to abstain from certain activities and behaviors during their studies, including dishonesty, the use of vulgar/obscene language, the viewing of pornography, the possession or use of alcohol on campus, and “sexual intimacy that violates the sacredness of marriage between a man and a woman.”

Victoria lawyer Michael Mulligan, who initiated the special meeting, argues that the Community Covenant is discriminatory towards homosexuals and that there is no place in Canada for a law school that holds traditional Christian beliefs.

“We are assessing an institution that wishes to discriminate based on sexual orientation,” said Mulligan, according to the CBC.

“In my judgment, that is wrong and offensive, and our law society ought not to countenance that or indeed approve the school as they are asking for,” Mulligan said.

However, Kuhn said there is no evidence to suggest that the religious beliefs of TWU-educated lawyers would affect the ability of those lawyers to serve all clients.

“In a free and democratic society, the faith of TWU graduates cannot preclude them from practicing law,” said Kuhn. “A just society protects the rights of religious minorities.”

Since Trinity Western University’s proposed School of Law was granted preliminary approval from the Federation of Law Societies of Canada (FLSC) and BC’s Ministry of Advanced Education last December, it has faced opposition in several provinces.

Currently British Columbia, Alberta, Saskatchewan, PEI, Newfoundland and Labrador, and Nunavut have approved the proposed school for the purposes of students articling in their province or territory. But law societies in Ontario and Nova Scotia voted against approving the school.

Manitoba, New Brunswick, Quebec, the Northwest Territories, and the Yukon have yet to make a decision.

TWU is taking legal action against Ontario and Nova Scotia to defend its religious freedom.

“We feel the provincial law societies in Ontario and Nova Scotia have made decisions that are legally incorrect and, unfortunately, TWU is now being forced to re-litigate an issue that was decided in its favour by an 8 to 1 decision of the Supreme Court of Canada in 2001,” said President Kuhn.

In 2001, in a similar case against the British Columbia College of Teachers, Trinity Western University successfully defended its right to grant teaching degrees at the Supreme Court of Canada.

TWU has six professional schools in the areas of business, nursing, education, human kinetics, graduate studies, and arts, media and culture. The university plans to go forward with its launch of Canada's first Christian law school in 2016, with the first graduating class in 2019.

Information about challenges to TWU's law school is available on TWU's School of Law website.