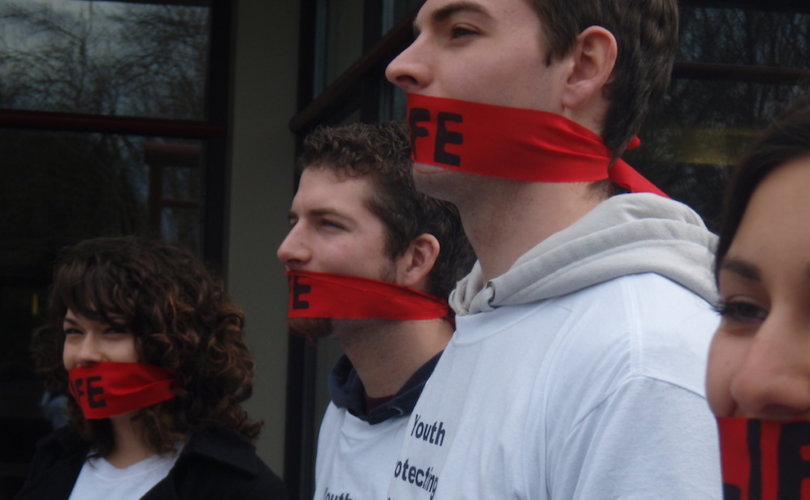 VICTORIA, British Columbia, April 19, 2016 (LifeSiteNews) – In a decision with potentially wide implications for freedom of speech on Canadian campuses, the British Columbia Court of Appeals has upheld the University of Victoria’s decision to ban a campus pro-life demonstration.

The case goes back to 2013, when the University of Victoria’s student society had denied the pro-life club, Youth Protecting Youth (YPY), club status over its pro-life messaging. As a result, the university denied YPY the use of a well-frequented public space and implicitly threatened YPY members with expulsion if they did it again.

The appeal court on Monday agreed with the British Columbia Supreme Court in finding that while the Charter of Rights and Freedoms protects individual rights and freedoms from infringement by government, U Vic, “insofar as its core functions are concerned… is autonomous” from federal, provincial or municipal government.

“That being the case,” the appeal court ruled, “and in the absence of a directive from government that a specific service or facility be provided, no aspect of its decision-making is subject to Charter scrutiny.”

The decision prompted John Carpay, head of the Calgary-based Justice Centre for Constitutional Freedoms, to tell LifeSiteNews, “This means that in British Columbia the Canadian Charter of Rights and Freedoms does not protect free speech on campus.”

Anastasia Pearse, national director of National Campus Life Network, regretted its possible impact on five other cases involving pro-life groups and universities across Canada. “Our universities should be a place where you can discuss the issues of the day,” she said. “We know abortion touches many people personally but that doesn’t mean we should not allow the issue to discussed. We shouldn’t baby students.”

Carpay said that courts in Alberta disagreed with the B.C. rulings, and found that the Charter did apply to some aspects of university governance and did prevent them from denying free speech on public campuses. But Ontario courts have held with British Columbia that who gets to speak on campus is a private matter for university administrations to decide internally.

Writing for the appeal panel, Mr. Justice Peter Willcock said that the University of Victoria was not applying any government directive on free speech when it banned Youth Protecting Youth from holding a “Choice Chain” consisting of graphic imagery at a prominent pedestrian intersection in 2013, but rather its internally drafted rules. These called for it simply to enforce decisions by the student society, which had banned YPY because pro-abortion students claimed to feel harrassed and threatened by its signs in the past.

YPY held its Choice Chain anyway, triggering threats of disciplinary action from the university. The university later rescinded its threats and its revocation of YPY’s right to book campus space. Commented Carpay, “It speaks to the university’s sincerity when they decide to do the right thing only when the other side threatens them with legal action.”

Carpay said that although the door appears to be shut in B.C. as far as the Charter, it was still “wide open” to an argument based on “fundamental rights.” Freedom of speech and expression, he noted, have been recognized by the Supreme Court of Canada as fundamental democratic rights long before the Charter was enacted in 1982.

As well, the appeal court had noted that the B.C. University Act by which universities were chartered did not lay on them the responsibility to promote free speech, as British law did for universities there. “Decades ago when the University Act was passed such a thing would not have been deemed as necessary,” Carpay said. “It would just be so obviously a given.” Under the current cultural climate of political correctness, however, “it would probably be a good idea for provincial legislatures to pass such laws.”

Pearse said that whether pro-lifers use graphic images of aborted babies, or cute pictures of living babies, or text messages chalked onto walls, or plastic models of unborn babies, “it’s always wrong. We are ‘fostering a culture of ambient violence,’ or ‘guilty of harassment,’ or ‘telling women what to do with their bodies.’”