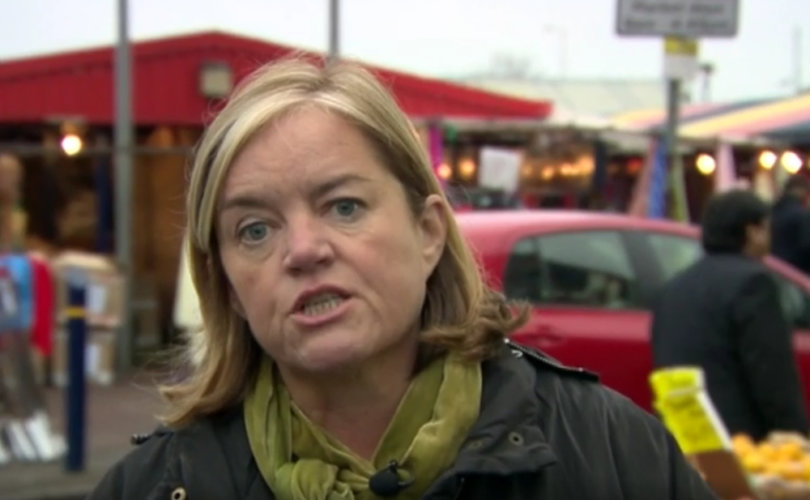 LONDON, United Kingdom, January 11, 2016 (LifeSiteNews) — Britain’s equalities czar has equated Christian schools with Islamic extremists for teaching that marriage is between a man and a woman.

Dame Louise Casey, a prominent bipartisan expert on social problems who just finished a review for the British government on “opportunity and integration” of isolated communities, told a parliamentary committee this week that Catholic schools were “homophobic.”

Casey said, “We have got to be careful that people can choose, obviously, to live the lives that they want to live, but that they cannot condemn others for living differently.”

“Do I think that some of the dynamics that happened in Trojan Horse are at play in other areas of the country? Yes, I do,” she said before moving on to her general indictment of Catholic educators and then all orthodox Christians.

In a reference to how Birmingham students were told by their Muslim teachers to boycott certain activities, she said, “I do not really have any view on which religion it is that it is promoting those sorts of views, but they are not OK, in the same way that it is not OK for Catholic schools to be homophobic and anti-gay marriage. That is not OK either — it is not how we bring children up in this country.”

“I have a problem with the expression ‘religious conservatism,’ because often it can be anti-equalities,” she said. (“Equalities” is a British catchphrase for social justice or human rights.)

Later, she tried again to broaden the direction of her report, cautioning, “It has to be balanced. We easily want to condemn racists, and so we bloody should! So we should, but we should also condemn people who have other extreme views.”

Nonetheless, the thrust of her report, released last month, is the growth of self-contained and self-sustaining Muslim communities where Sharia law is enforced especially against women aspiring to rights accepted in the rest of the country.

Groups created to defend heterosexual marriage protested Casey’s widely publicized remarks. The Coalition for Marriage called them “astonishing” and “one of the clearest indications” the country’s equalities leadership saw those teaching Christian sexual morality as extremists.

“Believing that marriage is between one man and one woman doesn't make you homophobic or an extremist,” the Coalition emphasized. “It's Dame Louise Casey's comments which are extreme.”

Anglican theologian Adrian Hilton took to his Archbishop Cramner blog site to say, “Louise Casey – whose whole political mission is virtuously dedicated to integration and social cohesion – has just jabbed another finger (not quite the middle one) at all those who call themselves religious conservatives, for ‘often’ they invoke that very term to cloak their anti-equalities bigotry in a shroud of holiness.”

Casey’s comments have reminded some of Archbishop of Canterbury Justin Welby’s recent observation about the government’s “religious illiteracy.” Said the archbishop: “The Foreign Office, the Ministry of Defense, our government generally, is desperately trying to catch up, to understand a world in which they have no grip on what it is to be religious at all.”

He continued, “They can’t see really the difference between an extremist Muslim group like the Muslim Brotherhood and a sort of conservative evangelical group in a Church of England church.”