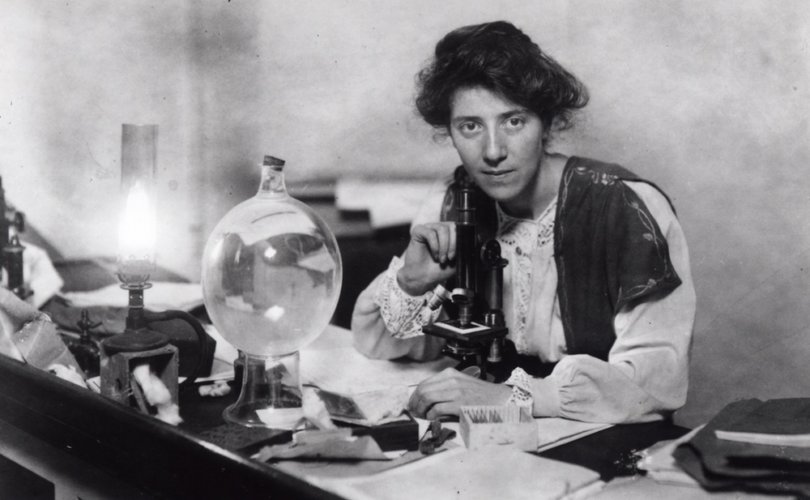 Marie Stopes in her laboratoryWikimedia Commons

ENGLAND, October 9, 2018 (LifeSiteNews) – A response to a UK Freedom of Information request has revealed that the British government is funding a play celebrating the life and work of eugenicist Marie Stopes. The theatrical company involved hopes to take the play into schools.

In June 2018, Dorset-based AsOne Theatre Company received a letter from Arts Council England confirming it had been successful in its application for government funding for a proposed play about Stopes entitled Escaping the Storm. The total amount involved was £11,500 ($14,991). The Arts Council is a non-departmental public body of the Department for Digital, Culture, Media and Sport. It is funded by £1.45 billion of public money, with an estimated £860 million coming from the UK’s National Lottery.

The application form submitted by AsOne states: “‘Escaping the Storm’ will see her [Stopes] in retreat from controversy, & bitter battles with the Catholic Church.” The application also says that the theatre company would create “a tailor-made workshop to inspire and encourage discussion about Ethics, Equality, Women’s Rights, Sex Education, & Choices.” As set out in the application, the audiences to be targeted are: “Family audiences 11 to elderly…Secondary School year-groups in each town on tour.” The document goes on to discuss holding “free workshops for secondary schools.”

Currently the AsOne website promotes Escaping the Storm by saying: “Dr Marie Stopes transformed how we think about sex. One of the 20th Century’s most controversial women, her strong views provided graphic understanding of pleasure and consequence of sex. Vilified then by the Catholic Church, Marie Stopes still provokes today.”

What the AsOne website doesn’t tell prospective audiences is that Stopes was an ardent eugenicist who sent love poems to Adolf Hitler.

Stopes was awarded a PhD in paleobotany from the University of Munich in 1904, before becoming the first female academic at the University of Manchester. In 1921, she opened her first family planning centre in Holloway, north London, before it moved to its current location at Whitfield Street in Fitzrovia, Central London. Also in that year, Stopes founded the “Society for Constructive Birth Control and Racial Progress.”

Its purpose was to prevent the birth of what she considered racially inferior working classes: “the inferior, the depraved, and the feeble-minded.” It is no coincidence that her centres were to be found in poor areas. In her book, Radiant Motherhood (1920), she states: “the sterilisation of those totally unfit for parenthood [should be] made an immediate possibility, indeed made compulsory.”

Perhaps not surprisingly, given her eugenicist views, Stopes admired Hitler. In 1935 she attended the Nazi-sponsored International Congress for Population Science in Berlin. On the eve of the Second World War, she sent the Führer a gushing letter with a copy of a slim volume of love poems she had written.

“Dear Herr Hitler, Love is the greatest thing in the world: so will you accept from me these [poems] that you may allow the young people of your nation to have them? The young must learn love from the particular ’till they are wise enough for the universal. I hope too that you yourself may find something to enjoy in the book.”

Stopes was anti-Semitic, anti-Catholic, and anti-Russian. A poem of hers from 1942 has this to say:

Catholics…
The Jews and the Russians,
All are a curse,
Or something worse…

Stopes died in 1958. In her will, she left her Whitfield Street centre to the Eugenics Society.

Today the organization she founded, Marie Stopes International (MSI), is present in 37 countries and commits three million abortions a year. A recent UK government report stated that at the Whitfield Street facility operated by MSI: “From May 2016 to April 2017, MSI Central London carried out 1811 surgical termination of pregnancy procedures and 1404 early medical abortions. There were 269 vasectomy procedures performed within the same period.”