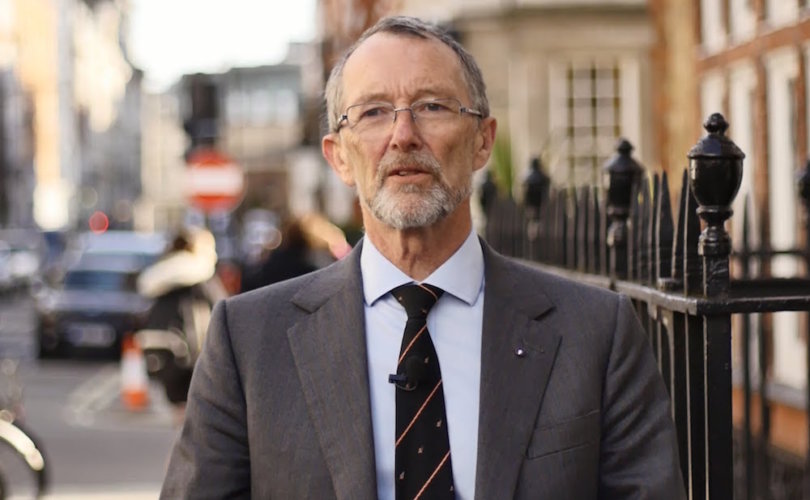 Fired British magistrate Richard Page tells LifeSiteNews he is fighting his dismissal for God, not to keep his job.

UNITED KINGDOM, March 29, 2016 (LifeSiteNews) – Richard Page, the magistrate recently fired for preferring to place children for adoption with heterosexual couples rather than same-sex ones, has to fight not only his dismissal but insults and lies thrown at him by TV host Piers Morgan.

Page, who was suspended last year for stating to two fellow judges at an adoption hearing that heterosexual couples made better parents than homosexual ones, was sacked earlier this month because he told a BBC audience the same thing and framed his treatment as discriminatory.

“I’m doing this because other Christians are telling me they fear for their jobs, and for the glory of God.”

The 69 year-old, who serves as a lay Baptist preacher in his home village of Headcorn, is willingly defending his action to the print and electronic media, even to the openly pro-homosexual ITV host Piers Morgan, because he wants to defend the jobs of other Christians, not his own.

“I’m doing this because other Christians are telling me they fear for their jobs, and for the glory of God,” Page told LifeSiteNews. “When I turn 70 at the end of the month I’d be retired automatically anyway. So I’m not doing it to keep my job. I’m doing it because I believe we need to stand and say what is right.”

The 15-year veteran of the British magistrate’s bench (the lowest British court and one staffed with lay people without formal legal training) recently stood up to Piers Morgan, the abrasive ex-tabloid editor who himself has been fired many times, the latest from CNN in the U.S. after his talk show suffered several years of low ratings.

Page denies the charge. “He was using the term wrongly. I don’t fear homosexuals at all. I don’t hate them.” He described serving alongside a homosexual man on the board of a charity “without ever giving him reason to think I was homophobic,” and caring for a homosexual friend dying of  HIV-AIDS.

Judges at his level have to decide custody disputes between divorced parents routinely and do so, he told LifeSiteNews, “with complete dispassion” without hating anyone. As for homosexuals, “as Christians we must love the sinner while hating the sin.”

Page told Morgan it was not only his right but his sworn duty as a magistrate to use his best judgment to “do what’s best for the child, not the parents.” And in his judgment, based on research evidence from the U.S. and on common sense, “a man and a women were the natural way of having a child,” and the best way of parenting.

The remarks he made last year that got him fired were very similar. He told the BBC: “I thought that because a baby comes from a man and a woman it made me think the child would be better off with a father and a mother than with single-sex parents. The other judges didn’t agree at all.”

Page told LifeSiteNews that the magistracy was filled with lay people precisely to bring the common sense or ordinary people to the law. But he said the research from the U.S., where same-sex parenting has been allowed for longer, shows that “It has horrendous effects on the children.”

He cited the controversial 2012 study by sociologist Mark Regnerus finding children raised by same-sex couples did far worse than heterosexual couples and even single mothers across a broad range of measures such as depression, school performance, sexual behaviour, experience of sexual abuse and dependency on welfare.

But Morgan was having none of it. “What is concerning everybody is not what is best for the child, but the person who’s job it is to determine this, clearly is homophobic.”

Page concluded by telling Morgan he was taking the Lord Chancellor Michael Gove to the Employment Tribunal because he was being discriminated against for his religious views which was just as illegal as discriminating against homosexuals. Morgan replied,  “I don’t think it is, so good luck with your case but I think it’s pretty obvious why you got sacked.” Page told LifeSiteNews: “He never gave any reasons, just kept saying I was homophobic.”

Kiaran Kelly of the Christian Institute told LifeSiteNews, “Calling people homophobic is just a way of shutting you down without having to present any arguments, of saying, ‘We don’t have to listen to what you have to say.’” Kelly said this tactic was “increasingly” being used by the Christian Institute’s opponents in debates over the United Kingdom’s moral and cultural future.

Page also said that he was constrained from revealing his complete reasoning for the adoption case last year, but he indicated he believed the homosexual couple’s lifestyle would put the child “in danger.”

He also told LifeSiteNews he had been urged to fight his dismissal by Andrea Williams, the lawyer and founder of the Christian advocacy group Christian Concern. “Don’t resign,” she told him. “It doesn’t matter whether you lose your job. What matters is you honour and glorify God.” Christian Concern is providing legal support.