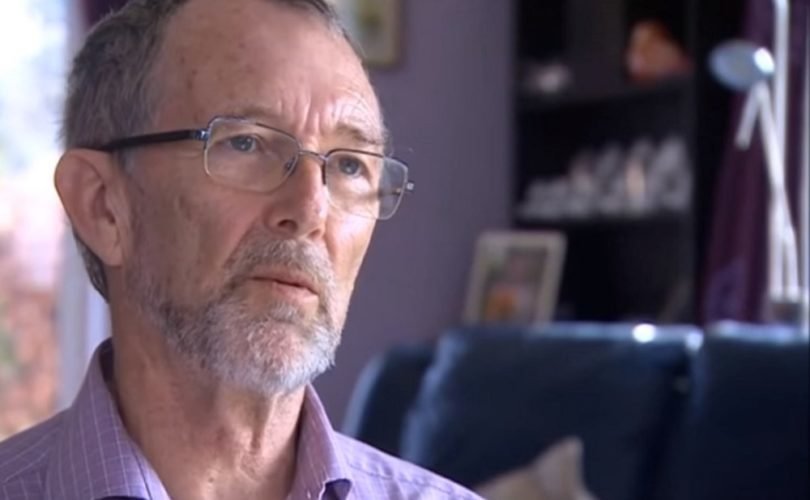 British magistrate Richard Page was fired for his beliefs on adoption and family.

UNITED KINGDOM, March 21, 2016 (LifeSiteNews) – A British magistrate suspended last year for preferring heterosexual adoptive couples to homosexuals has been fired outright for repeating his views on the BBC.

Richard Page, 69, a magistrate in the Maidstone and Sevenoaks courts in Kent and a father of three, was fired for expressing his “biased and prejudiced” views on the BBC without permission, but says he will appeal through the employment tribunal.

“To punish me and to seek to silence me for expressing a dissenting view is deeply worrying. I shall challenge this decision, as it is deeply illiberal and intolerant,” he told reporters.

Andrea Williams of the Christian Legal Centre agreed: “This unmasks the face of the new political orthodoxy; it is unkind. It tries to silence opposing views and if it fails it crushes and punishes the person who holds those views. To remove someone like Richard from the bench is modern-day madness. He has a lifetime of public service, expertise in mental health. He is motivated by his Christian faith and a deep compassion for people.”

Chris Joyce, a spokesman for Christian Concern, said the group “absolutely supported Page” on both moral and empirical grounds, believing that the research from the North America, where homosexual adoption has been permitted for longer, indicates that Page is correct that children do better in heterosexual families.

Joyce said the actual reason for Page's firing was technical: judges are not allowed to speak to the news media without their superiors' permission. “But Mr. Page will argue that since he was under suspension at the time, this did not apply to him,” Joyce told LifeSiteNews. “We will also argue that he was under oath to do what was in the best interest of the child and he should be able to state that.”

Page spoke to the BBC a year ago after being suspended and then ordered to undergo re-education to improve his beliefs on sexuality issues. Part of a tribunal considering an adoption case, he had expressed the view in private to the other judges that “because a baby comes from a man and a woman, it made me think the child would be better off with a father and a mother than with single-sex parents. The other judges didn't agree at all.” Not only that, but one of them reported his views to his superiors.

Page, an evangelical Christian, did not submit to re-education meekly; rather, he was openly critical of the government's action. In explanation of his original comment to his fellow judges, he told the BBC, “As a magistrate, I have to act on the evidence before me, and quite simply, I believe that there is not sufficient evidence to convince me that placing a child in the care of a same-sex couple can be as holistically beneficial to a child as placing them with a mum and dad as God and nature intended.”

While homosexual adoption has not been permitted for long enough to analyze the results, there are studies of children raised by gay couples, one of whom is the child's natural parent and the other is that parent's same-sex lover. One of the largest of such studies  is Simon Fraser University's economist Douglas Allen's “High school graduation rates among children of same-sex households,” published in the December 2013 issue of the Review of Economics of the Household. Based on Canadian census data, the study showed that 33 % fewer children raised by same-sex couples graduated from high school than did the children raised by different-sex couples.

While there are more than 40 other North American studies showing no difference in outcomes from the two sets of parents, scholars such as Allen claim that these have seriously flawed methodologies, especially in the selection of the parents surveyed.

The Judiciary Conduct Investigations Office, however, states, “The Lord Chancellor and Lord Chief Justice found that Mr Page's comments on national television would have caused a reasonable person to conclude he was biased and prejudiced against single sex adopters; they considered this to be serious misconduct which brought the magistracy into disrepute.”