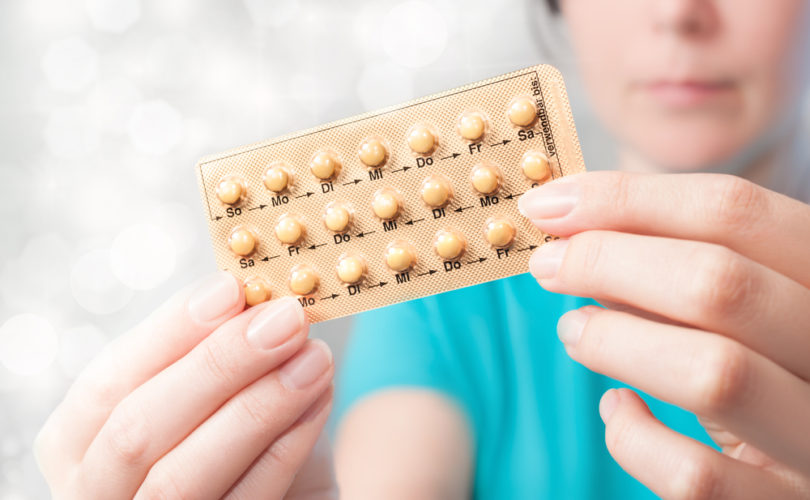 June 2, 2016 (LifeSiteNews) – A British mother of two who suffered a stroke after taking the birth control pill is working hard to recover and now wants other women to know the risks of chemical contraceptives.

Judith Rankin was left partially paralyzed and unable to kiss her children after the February stroke. The 37-year-old midwife had only been taking the pill for eight weeks when it happened, and had no reason to think she was at special risk.

“I don’t have a family history at all of stroke or heart disease,” she said. “I’m not obese and I don’t smoke. There’s no other reason for it – it’s all pointing at the pill.”

Rankin’s stroke side effects were so severe she could not talk or brush her teeth, the UK Mirror Online reports. Her lead physician told her it was the equivalent of having been hit with a baseball bat.

The stroke came out of nowhere, and was frightening.

“I was feeling fine. I was filling out an online form for my mum’s car insurance,” Rankin recalled.  “A dizziness, a strange feeling, came over me.”

“I turned to ask mum what her phone number was and no words came out,” she said. “It was just a sort of mumble.”

Her partner thought she was kidding around at first before seeing her panic and calling an ambulance.

“I didn’t know what had happened,” said Rankin. “It was very scary. I was crying and my mum was holding my hand.”

She was rushed to the hospital where tests were performed.

“I couldn’t smile,” Rankin said. “I had droop in the right side of my face.”

It was the beginning of a long road to recovery. Rankin recounted how she was able to get a few words out upon arriving to the hospital, but that it would be another four weeks until she fully got her speech back.

“I couldn’t kiss and when I was trying to brush my teeth I couldn’t spit,” she remembered. “When I was eating I had to try to push the food back in my mouth before I could swallow.”

Rankin’s adverse experience with the pill is all too common, a leading pro-life advocate said.

“The recent report on the midwife who claims that taking the birth control pill gave her a stroke and left her partially paralyzed is a sad commentary on the ongoing tragic side effects on a pill that is still, even in view of numerous documented side effects, marketed as the best way to “avoid” pregnancy,” said American Life League President Judie Brown.

The pill Rankin was taking was the combined hormonal pill, the most common type, consisting of both artificial estrogen and artificial progesterone.

While contraception has been promoted as necessary for helping mothers to space their children and thus be better able to care for them, another of Rankin’s doctors had told her she was of the opinion the stroke came about from Rankin’s taking the pill post-natally just after the birth of her second son.

Negative side effects of the pill have well documented for years.

The World Health Organization has classified the combined oral contraceptive as a Group 1 carcinogen, meaning it causes cancer in humans.

In addition to increased risk of stroke and blood clots with hormonal contraceptives, there is the pill-breast cancer link, and numerous other potential dangers, including miscarriage, blindness, hair loss, depression, hardening of the arteries, pulmonary embolism, cervical cancer, multiple sclerosis, brain shrinkage and Crohn’s disease.

Rankin would like to see more awareness of the pill’s risks, along with more research into its side effects.

In her own case, doctors had asked her after her stroke whether she was on medication, and she didn’t think to mention the pill at first.

Since having her stroke Rankin has heard of many others who’ve had the same experience.

“People might think this doesn’t happen,” she stated, “but it does.”

“Since it happened to me I’ve heard of lots more people who have experienced something similar, many of them are going back years to the 60s, people my mum’s age,” Rankin continued. “The pill isn’t the be-all and end-all for contraception.”

Brown concurred in the need for awareness-raising on the pill. “Preborn babies are never problems; birth control pills on the other hand create all sorts of problems including the possible deaths of preborn babies.”

Rankin is doing her best to recover for her family, including her two young sons. “I kept thinking, ‘I have two kids, I just can’t be not well,” she said. “I still stutter and stammer when I’m tired. I can feel very fatigued and we don’t know how long that could last,” Rankin continued. “Some of the nurses said some people never recover.”

With help, the family is taking each day as it comes. “I’m trying to build myself back up, doing a bit more each day. I’m better than I was two weeks ago but will I always have this? I just don’t know,” said Rankin. “Thankfully, I’ve got loads of really good friends who help out with the kids. I’ve had to rely on them a lot.”