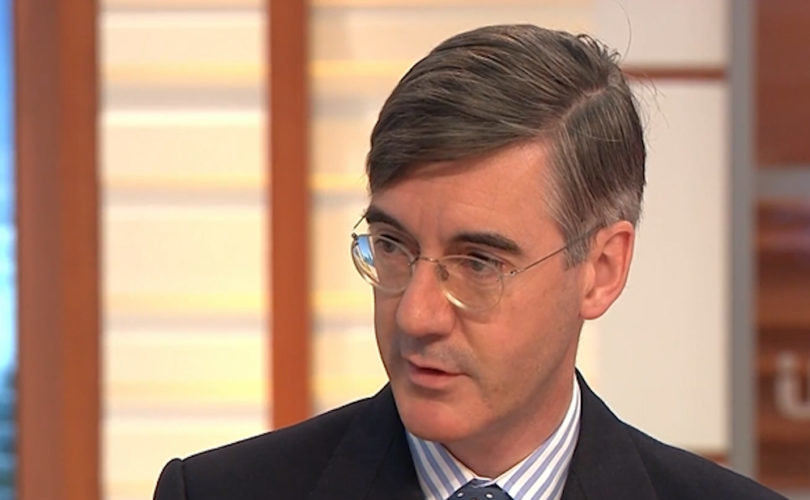 ENGLAND, March 28, 2018 (LifeSiteNews) – The British Conservative MP Jacob Rees-Mogg, who famously named his sixth child Sixtus Dominic Boniface Christopher, said he prays “in a very traditional Catholic way” and prefers the ancient Traditional Latin Mass because of its focus on the Eucharist.

Rees-Mogg made these comments in a nearly 30-minute interview for the “Moggcast,” explaining to non-Catholic listeners what the rosary is and saying he tries to pray it every day. Under the reign of Elizabeth I, he said later, it would have been “viewed as practically treason” for him to carry rosary beads.

“If the ultimate joy is heaven and this [life] is merely a means of getting to heaven, then a loving God is not condemning in the way that it’s sometimes seen,” said Rees-Mogg. The horrors of human history can be explained by free will, he said, but natural disasters are “the harder bit to explain.”

Rees-Mogg clarified that he was married in a Latin Novus Ordo – the Mass of Vatican II – not the Old Rite of the Mass.

But “I like the Old Rite,” he said, and “I do go to the Tridentine Rite when it is available near me in Somerset.”

“There’s more silence” in the Old Rite, “and the new order [Mass] can sometimes have quite a lot of background noise,” he noted. “Silence is a good thing in church.”

It’s a “matter for people’s consciences” but “as an individual MP, I would vote in favor of life,” he said.

Even though it “would be easier to say nothing” when asked about his faith, Rees-Mogg said, “When you are asked a question, you cannot wait for a cock to crow,” referencing Peter denying Christ.

The MP said the limitations of papal infallibility are part of what allows him to accept it.

“I accept the doctrine of papal infallibility partly because of its limitations,” he said. “You must always take what the pope says seriously, but it is not the official dogma of the Church except in those very narrowly defined circumstances.”