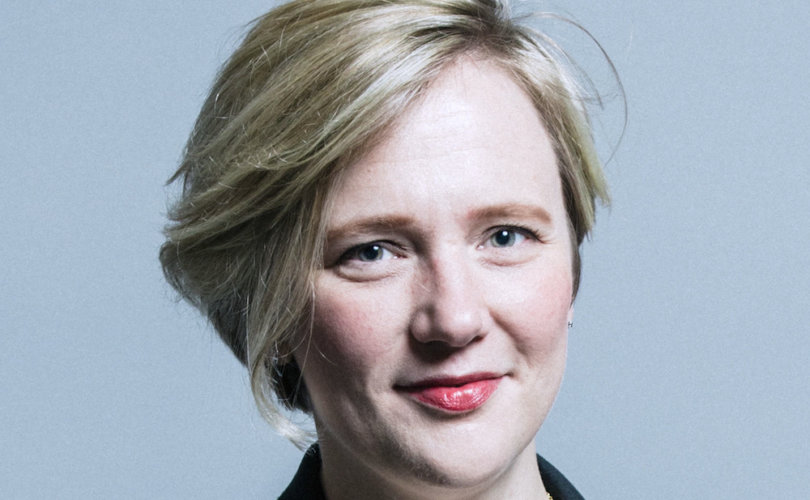 September 13, 2018 (LifeSiteNews) — British Labour Member of Parliament Stella Creasy continued to call for changes to the law banning abortion in Northern Ireland at a conference in Dublin while attacking the First Minister of Northern Ireland Arlene Foster’s continuing pro-life stance.

On Monday, Creasy took part in a panel discussion on Our Vision for Women in 2018 at the International Congress of Parliamentary Women's Caucuses in Dublin Castle. The global gathering included parliamentarians and diplomats representing more than 40 countries as well as activists, writers, artists, and academics.

Reports indicated that some of the hundreds of delegates in the audience “audibly gasped” as Creasy described the criminalization of abortion in Northern Ireland.

Creasy told those listening: “Right now, there is only one woman who gets to make a choice about abortion rights for all women in Northern Ireland and she's called Arlene Foster.”

“In Northern Ireland, if you are raped, you can face a longer prison sentence than the person who attacked you if you choose to terminate that pregnancy,” she said.

“The UK Supreme Court said this breaches the human rights of women, but my government refuses to step in to allow women in Northern Ireland to have modern abortion laws,” she continued. “And because my Prime Minister needs to be in power by using the votes from this person, they don't want to move forward on abortion legislation, but I don't think it's right that that one woman should make that choice.”

Creasy has pro-abortion support from Irish Prime Minister Leo Varadkar, who attended the event. Creasy said the Irish premier assured her that he would support her campaign for “abortion rights.”

On June 5, Creasy was at the forefront of calls for reform when the British House of Commons had an emergency debate on an abortion provision in Northern Ireland after the Irish Republic’s referendum last May.

After the Republic’s referendum result was known, Foster, the Democratic Unionist Party leader and Northern Ireland’s First Minister, was quick to state that decision had “no impact upon the law in Northern Ireland.” She pointed out that abortion was a matter for the Northern Ireland Assembly to “debate and decide” as it remains a “devolved issue.”

After the Irish referendum, British Prime Minister Theresa May came under pressure to scrap existing abortion laws in Northern Ireland. Pro-abortion groups and their Parliamentary supporters, in particular Creasy, called for changes to what they termed the “anomalous” situation – one that is different than the rest of the UK – with regard to abortion provision in Northern Ireland. The British 1967 Abortion Act that permitted abortion in certain circumstances was never extended to Northern Ireland.

In July, Creasy was instrumental in organizing a letter to The Sunday Times signed by 170 parliamentarians from the UK and Ireland demanding that May override the wishes of the people of Northern Ireland and introduce a liberal abortion regime there.

Creasy and her pro-abortion parliamentary allies are largely prevented from making changes to the law in Northern Ireland by the current political predicament of the Westminster government. After the 2017 British general election, May’s Conservative government has no overall majority in the House of Commons. She needs the support of the 10 DUP Members of Parliament to ensure that her administration in London does not collapse. Therefore, at present, there is no move afoot in the Westminster Parliament to cause any tensions between the ruling Tory administration and its junior coalition partner; and so the subject of abortion and Northern Ireland is not on any government agenda – for now at least.

Creasy is not just interested in Northern Ireland. She has pushed for more abortion liberalization in the rest of the UK. She has tabled an amendment to the Domestic Abuse Bill currently before the UK’s House of Commons and written her own:

The forthcoming domestic violence bill is due to consider the Victorian Offences Against the Person Act, which criminalises women in this way. Repealing it would lay the foundation for a modern medical approach to abortion across the UK, including in Northern Ireland, which could put women’s safety at the heart of future legislation.

The proposed Creasy amendment is, therefore, not just about an abortion provision in Northern Ireland. By removing the criminal law that underpins current British abortion legislation — Ss. 58 and 59 of the Offenses Against the Person Act of 1861 — abortion itself will be decriminalized throughout the United Kingdom (the 1967 Abortion Act only permitted abortion in certain circumstances and within defined time limits), thereafter paving the way for what Creasy describes as “a modern medical approach to abortion across the UK.”

So it is no coincidence that Creasy’s call at the Dublin conference to change the law in Northern Ireland came at this time. It is part of an orchestrated move to pressure the DUP in general and Foster in particular.

As Creasy knows, there is little support for her cause within Northern Ireland. Instead, she gathers support from outside its borders – from Great Britain and the Irish Republic  – in an attempt to force change upon Ulster’s pro-lifers.