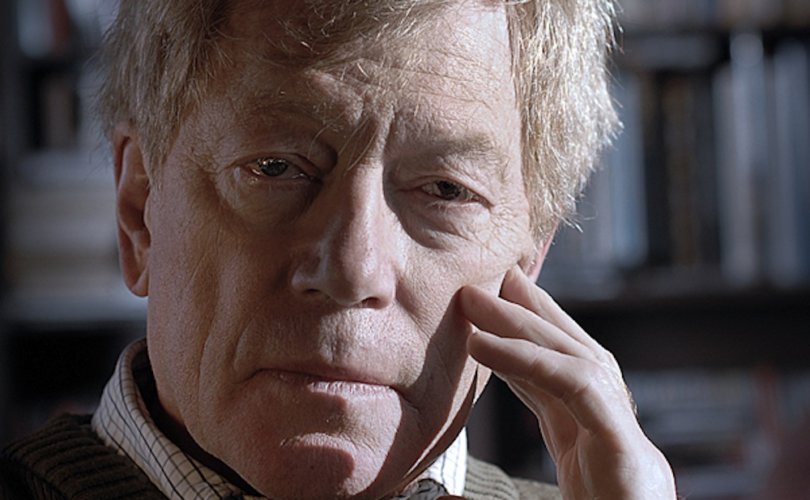 UNITED KINGDOM, November 8, 2018 (LifeSiteNews) — One of the most influential conservative philosophers in the Western world may soon be out of a job.

Sir Roger Scruton was tapped by the UK Housing Secretary on Saturday to chair a government committee whose purpose is to champion beautiful buildings.

Almost immediately after news of Scruton’s appointment broke, several Labour MPs began calling for his removal from the non-salaried post, claiming he has a history of making “offensive” anti-semitic, Islamophobic, and homophobic remarks.

Scruton, who has taught at Princeton, Oxford and St. Andrews, among other places of higher learning, is 74 and has authored more than 30 books on topics ranging from art and architecture to literature and music. He received the Czech Republic’s Medal of Merit in 1998 for having fought against communism in Eastern Europe in the 1980s. In 2016, he was knighted by Queen Elizabeth II for services to philosophy and education. Currently, he serves as a senior fellow at the D.C.-based Ethics and Public Policy Center.

Shadow communities secretary Andrew Gwynne and backbenchers Wes Streeting and Luciana Berger, parliamentary chair of the Jewish Labour Movement, want Scruton ousted in part for comments he made during a 2014 lecture titled “The Need for Nations” in Hungary.

The MPs also point to past statements where Scruton, who is opposed to adoption for same-sex couples, has called homosexuality “not normal” and has characterized Islamophobia as a “propaganda word” meant to intimidate people into silence as examples of him being unfit to lead the commission.

In his 2014 lecture, Scruton wondered if the nation-state was incompatible with Islam. He also delved into the intricacies of international relations and discussed the influence of Jews and of what he called the “Soros empire” in Europe.

Scruton has been friends with current Hungarian Prime Minister Viktor Orban since 1987, and has often visited the increasingly Christian, anti-open borders country.

In recent years, Orban has successfully driven the influence of George Soros, a native Hungarian who spends millions to impose his liberal agenda on the world, out of his nation. For his patriotic efforts, he has been unfairly accused of anti-Semitism by a number of pro-globalist journalists and politicians.

MP Streeting told the liberal website Buzzfeed, “With every passing hour it becomes clear that Roger Scruton has a history of making offensive comments. It beggars belief that he passed a vetting process.”

In an apparent attempt to link Scruton to Orban’s purported hatred of Jews, MP Berger said, “An individual who peddles anti-semitic conspiracy theories has no place advising government about anything.”

Scruton denies all accusations that have been leveled against him, which only seem to confirm what he wrote in his 2017 book Conservatism: Ideas in Profile.

In the book, Scruton argues, “In a society devoted to ‘inclusion,’ the only ‘phobia’ permitted is that of which conservatives are the target.”

Conservatives, he added, “are frequently marginalized or even demonized as representatives of one of the forbidden ‘isms’ or ‘phobias’ of the day — racism, sexism, homophobia, transphobia, Islamophobia, etc.”

The Bow Group, a conservative British think tank, tweeted its support for Scruton.

The Bow Group fully supports Sir @roger_scruton, one of the greatest conservative minds in history-Those who oppose #culturalmarxism are constantly under attack in the media, having faced down the Soviet Union,#SirRogerScruton is one of the few that will never bow to its pressure

Staff writers Helen Dale, a homosexual, and Fraser Myers for the British website spiked have come to Scruton’s defense as well, arguing in separate articles that his critics are “offendotrons” and acting like thought police.

James Delingpole of Breitbart has also written about the attempt to fire Scruton, claiming the attacks on him are a classic example of social justice warrior “point and shriek” tactics whereby a “shrill, fascistic minority feign noisy outrage in order to bully the majority into acting against its own interests.”

Scruton released a statement earlier this week on his personal website. It is presented here in its entirety:

Following my appointment as the unpaid chairman of the Government’s advisory committee on Building Better, Building Beautiful, I have been offended and hurt by suggestions I am anti-Semitic or in any way ‘Islamophobic.’

Nothing could be further from the truth, and I wish to rebut these incorrect assertions.

If people actually read my comments regarding the interplay between George Soros and Hungary they will realise they are not in any way anti-Semitic, indeed quite the opposite.

Only two years ago I supported George Soros by making representations to Prime Minister Orban’s regime to keep open the Central European University so that intellectual freedom could continue to flourish in Hungary.

My statements on Islamic states points only to the failure of these states, which is a fact. My views on Islam are well known and can be found in my book The West And The Rest.