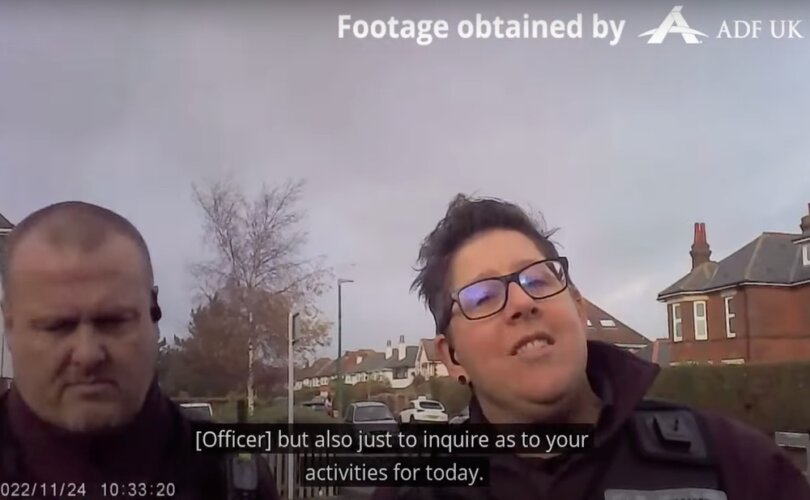 BOURNEMOUTH, England (LifeSiteNews) — A British father and military veteran was slammed with a fine for silently praying outside an abortion facility. The incident is among several of its kind to make major headlines in the past several months and relates to a controversial UK protection order that prohibits prayer and even crossing oneself within so-called “safe zones” surrounding abortion facilities.

Adam Smith-Connor, a physiotherapist and army veteran from Southampton, England, was penalized with the fine after he was confronted by “community safety accredited officers” while praying silently outside a British Pregnancy Advisory Service (BPAS) abortion clinic in Bournemouth in November.

🚨BREAKING: Army vet fined for silent prayer (for his late son) in PSPO zone near abortion facility in Bournemouth.
“I’m sorry for your loss, but ultimately, we have to go along with the guidelines of the PSPO…”

Faith-based legal advocacy group ADF UK is supporting Smith-Connor and has engaged a legal team to challenge the fine on his behalf.

According to a press release issued by the group, the army vet “had his back to the clinic in order to be mindful of the privacy of staff and attendees of the abortion facility.”

Video of the incident dated November 24, 2022, and shared by Smith-Connor shows officers asking him about “your activities for today.”

“Well, I’m praying,” he answered, to which a female officer informed him that he was “in an area which is governed by a Public Space Protection Order [PSPO].”

Later in the video, Smith-Connor can be heard to tell officers that he was specifically “praying for my son, who is deceased.”

The officer said she was “sorry for your loss” but explained she believed he was in violation of clause 4a of the PSPO “and we have to follow through on those regulations.”

The council has subsequently issued a fine against the veteran.

PSPO orders are currently in place around five UK abortion facilities, according to local news reports.

Activities prohibited under the orders include “[p]rotesting, namely engaging in an act of approval/disapproval or attempted act of approval/disapproval, with respect to issues related to abortion services,” as well as “[h]olding vigils’ where members audibly pray, recite scripture, genuflect, sprinkle holy water on the ground or cross themselves if they perceive a service-users is passing by.”

Council officers have enforced the PSPO order in the area surrounding the Bournemouth abortion facility since October 13, 2022.

According to the ADF UK press release, Smith-Connor later gave further details in reference to the incident.

“Twenty-two years ago, I drove my ex-girlfriend to a facility and paid for her to have an abortion. It was a pivotal moment in my life,” he said. “The consequences of my actions that day came back to grieve me years later, when I realized I had lost my son Jacob to an abortion I had paid for.”

He said that he prayed outside the Bournemouth facility “for my son Jacob, for other babies who have lost their lives to abortion, for their grieving families, and for abortion clinic staff.”

Smith-Connor added that he “would never have imagined being in a position to risk a criminal record for praying silently.”

He said he had previously assisted with in-hospital abortions during his army medical training, but now prays for abortionists because he has come to understand “how harmful abortion is to women and families, and that every single human life is valuable – no matter how small.”

“Most of all, I’m moved to pray because of what happened to my son, Jacob,” he said.

In a statement included in the press release, ADF UK legal counsel Jeremiah Igunnubole argued that “[n]obody should be criminalised for what they believe – especially not when they express that belief silently, in the privacy of their own minds.”

The legal advocacy group noted that the incident involving Smith-Connor follows a similar case in which pro-life volunteer Isabel Vaughan-Spruce was arrested for allegedly violating a PSPO order because she may have been engaged in mental prayer while standing outside the facility while it was closed to the public.

Vaughan-Spruce is slated to appear before the Birmingham Magistrates’ Court on February 2 on charges of violating the PSPO by mentally praying outside a closed abortion facility.