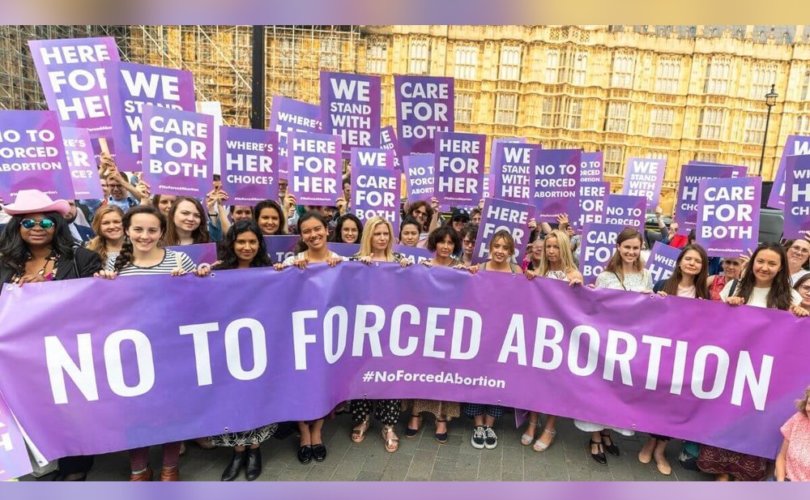 The “Stand With Her” demonstration yesterday evening was both ebullient and serious in the wake of an Appeals Court overturn of an earlier decision in the Courts of Protection that a Nigerian disabled woman living in Britain should be forced to have an abortion.

“The atmosphere was one of joy that the woman and her child had been spared but also of horror that this could have happened,” Caroline Farrow, the Campaign Director for UK & Ireland at CitizenGO, told LifeSiteNews via social media.

She added that the demonstrators were determined to make sure that a forced abortion order never happened again.

Farrow estimated that there were 200 participants at the rally. The Catholic Universe, a Catholic newspaper, reported that representatives from the Good Counsel Network, the March For Life UK, the Society for the Protection of Unborn Children (SPUC), Rachel’s Vineyard, the GK Chesterton Society, 40 Days for Life, and Right to Life UK took part. Alliance of Pro-Life Students also attended the demonstration.

Although people who believe women should have the “choice” either to abort or not abort were welcome at the rally, Farrow believes that only pro-life people attended.

The mother of five added that she had seen a lot of support for the forced abortion decision from so-called “pro-choice” people on social media.

“The age of the baby sent them into defensive mode,” Farrow said.

“They were so keen to defend late-term abortion at all costs they were able to overlook a grotesque violation of human rights.”

Farrow said that this showed a deep ignorance about people with learning disabilities: some people still believe that mentally disabled adults are “like children” in terms of their mental age.

“This is the kind of dangerous thinking which infantilises adults and leads to a deprivation of their basic human rights,” she said.

Madame Justice Nathalie Lieven, the judge who originally decided that a disabled woman should be forced to have an abortion, described the adult as having the mental capacity of a six-to-nine year old child. Lieven stated that she believed that the disabled woman wanted her child in the same way she would like a doll, and the post-abortion care plan for the woman included giving her a doll after her child was killed.

In a press release, Right To Life UK stated that it was “unlikely” that this is the first time a woman has been threatened with a forced abortion in Britain.

“It is unlikely that this is a one-off case,” they wrote. “Right To Life UK will be calling on the Department of Health to urgently reveal how many women have been forced by a hospital to have an abortion against their will in the UK, and make clear how they will ensure no women and family will ever have to go through this again.”

In an address to the rally, Emmi Egbonou called Madame Justice Lieven’s ruling a “betrayal” of both the justice system and the vulnerable.

“What is shocking is that this was ever allowed to happen in the first place,” she said.

Clare McCarthy of Right to Life UK also condemned the original ruling and applauded the three justices of the Appeals Court who overturned it.

June 28, 2019: This report has been updated to include that Alliance of Pro-Life Students attended the demonstration.