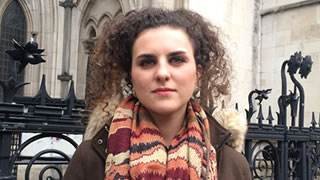 LONDON, England, August 3, 2016 (LifeSiteNews) — A young British pro-lifer will appear Thursday in court to request a reduction of £ 47,000 (US $62,000) in court costs she was ordered to pay for taking two doctors to court after they were caught on video illegally offering to do sex-selective abortions.

“I’m saddened that this is the state of our justice system,” Aisling Hubert told LifeSite News. “It’s immoral when the person who seeks justice is hit with a huge legal bill like this, and it makes me worry that others will be deterred from private persecutions in the future.”

Hubert, a 23-year-old volunteer with Abort-67, launched a private criminal prosecution against Dr. Prabha Sivaraman and Dr. Palaniappan Rajmohan after both were caught on video in 2012 expressing their willingness to perform sex-selection abortions to undercover journalists who claimed to be unhappily pregnant with female unborn children.

The Crown Prosecuting Service investigated but ultimately decided to drop the cases, whereupon Hubert, in consultation with her family, elected to pursue private prosecutions. These are a holdover from the time centuries ago when all criminal prosecutions were brought by the victims, just as civil cases are today.

“My family were very supportive,” Hubert said, “and it was something somebody had to do.”

Though sex-selection abortions are not expressly prohibited by the country’s 1967 Abortion Act, the law permits abortion only when the health of the mother is threatened. Politicians have argued, therefore, that the law implicitly criminalizes sex-selection abortions, and abortion providers such as the British Pregnancy Advisory Service argue the opposite.

Instead of clarifying the question as some had hoped, the Crown’s actions have muddied the waters. They not only withdrew from their own prosecution but took over Hubert’s with the explicit intention of dropping it, which they did in March 2015.

The Crown admitted at that time that there was “a reasonable prospect of conviction” but still refused to prosecute on the grounds that it was not in the public interest. “Taking in to account all the other evidence we are aware of, whilst there is sufficient evidence for a realistic prospect of conviction, this is truly very finely balanced indeed,” the CPS claimed. “However, the public interest considerations in not pursuing a prosecution outweigh those in favor.”

CPS boss Alison Saunders said it would be better for the doctors to be subjected to disciplinary action by the medical profession than face criminal charges.

Last year, the two doctors secured a court order for Hubert to pay their court costs, and the CPS added its costs as well, bringing the total to £47,000. Hubert will tell the court on Thursday that she cannot pay, requesting that either the court withdraw the costs award, permit her to pay it in installments, or send her to jail.

“It’s immoral to pay it,” she told LifeSite News.

Meanwhile, she has appealed the Crown’s decision to drop the charges against the two doctors to the European Court of Human Rights.

Hubert argues that “private prosecution is an important check and balance on state power. It allows private citizens to fight for justice when the state apparatus has failed or turned a blind eye. But these massive costs will make it impossible for people like me in the future,” Aisling said.

The Crown Prosecuting Service can intervene and take over private prosecutions and then dismiss them. The CPS initially investigated both doctors but dismissed both investigations, and after Hubert initiated her private actions, took them over and dismissed both. The Crown admitted that the investigations met one of the criteria for proceeding — a likelihood of conviction — but not the second, which is that the prosecution “is in the public interest.”

Dr. Rajmohan also agreed to perform the abortion after hearing the reason was the unborn child’s gender, telling the reporter, “It’s like female infanticide, isn’t it?”

But though the CPS secured the videos from the London Telegraph, it would not release them to Hubert’s lawyers or to the court considering charges.

Calling the Crown’s actions a case of “establishment overreach,” Andrea Williams of the Christian Legal Centre complained that Hubert’s “attempts to seek justice have been persistently and vociferously undermined by the CPS.”

Williams added, “It is an honor to stand with Aisling and support her in her attempt to expose the evils of gender abortion and pursue justice in this matter.”

UK halts prosecution of abortionists who did sex-selective abortions