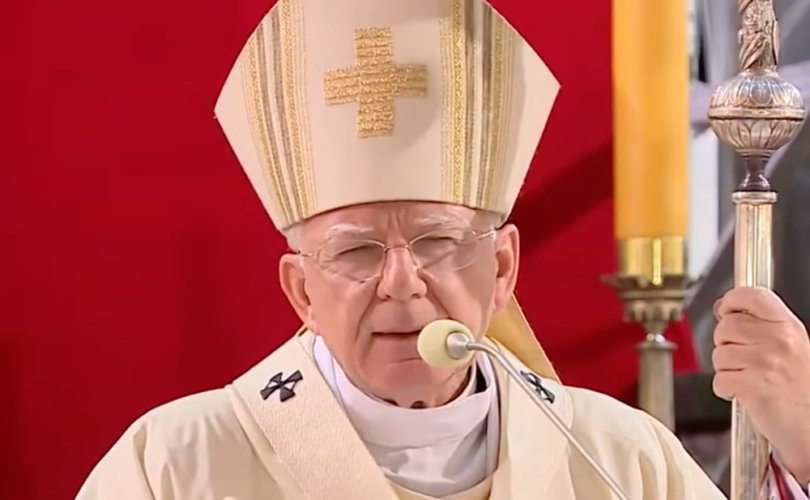 “Metropolitan of Krakow,” they wrote, “as bishops gathered at the Christmas meeting (in Rzeszów), we express solidarity with you against the detrimental attacks that the evangelical Defender of Truth must endure.”

“It is always glorious to stand on the side of Christian anthropology, which seems in Man the image of God Himself.”

These bishops believed Archbishop Jędraszewski needed support after remarks he made to Poland’s Telewizja Republika television station were mischaracterized by a hostile press as an attack on the environment and Greta Thunberg.

The archbishop responded to Telewizja Republika’s question about “ecologism” by saying any new movement that threatens marriage and the Christian tradition is “a very dangerous phenomenon.”

The Christian tradition, Jędraszewski said, “is being questioned by new movements, and each tries to impose itself as binding doctrine.”

“It’s a very dangerous phenomenon because it’s not just that a teenager is trying to impose it, but that this activist is becoming an oracle for all political and social forces,” he continued.

“This is contrary to everything that is recorded in the Bible beginning with the Book of Genesis, which clearly mentions God’s miracle of Creation.”

The Archbishop continued by saying that man is the pinnacle of this creation and was asked to name the animals and subdue the earth. Because he cannot find a partner among the  creatures, God gives the man a wife.

“That is the vision of man and the world which Christianity proclaims and which is also a vision deeply rooted in Judaism,” Jędraszewski added.

“Suddenly, everything is questioned or, that is, our culture is questioned, the whole natural order is reversed, beginning with the existence of God put to the question. The Creator, as well as the role and dignity of every person, is questioned.”

The transcript of the interview was edited so that the “teenager” was identified as Thunberg. The interview was aired on Christmas Eve, and the Archbishop returned to this theme in his Midnight Mass homily.

Jędraszewski’s mild remarks about man’s place in creation caused a media storm as the Archbishop’s left-wing critics claimed that he had shown no concern for the environment. On Boxing Day, the deputy mayor of Warsaw, Paweł Rabiej, tweeted a photograph of an Australian bushfire and wrote, “From the perspective of the fires in Australia, where I am today, I can say only one thing. There is no worse plague in the world today than those who question the need to take care of and protect our planet. Jędraszewski, go to hell, that’s your place.”

Polish-American translator and journalist Filip Mazurczak, who lives in Kraków, told LifeSiteNews that his Archbishop’s remarks should be understood in the context of Pope John Paul II’s thoughts on the environment found in his 1991 encyclical Centesimus Annus.

“In addition to the irrational destruction of the natural environment, we must also mention the more serious destruction of the human environment, something which is by no means receiving the attention it deserves. Although people are rightly worried — though much less than they should be — about preserving the natural habitats of the various animal species threatened with extinction, because they realize that each of these species makes its particular contribution to the balance of nature in general, too little effort is made to safeguard the moral conditions for an authentic “human ecology.” Not only has God given the earth to man, who must use it with respect for the original good purpose for which it was given to him, but man too is God's gift to man. He must therefore respect the natural and moral structure with which he has been endowed. In this context, mention should be made of the serious problems of modern urbanization, of the need for urban planning which is concerned with how people are to live, and of the attention which should be given to a ‘social ecology’ of work.” (Centesimus Annus, 38)

“In recent years, we've had this bonkers new ideology in which people like Bernie Sanders think that the demographic crisis facing many societies, especially but not exclusively in Europe and East Asia, is a good thing and that people should stop having children in order to limit their carbon footprint,” Mazurczak told LifeSiteNews.

“Naturally, this goes hand in hand with promoting abortion and contraception,” he continued.

“I think that Jędraszewski was talking about this.”

The Metropolitan Archbishop of Kraków has made headlines previously for defending Catholic teaching regarding marriage and the family against LGBT ideology.