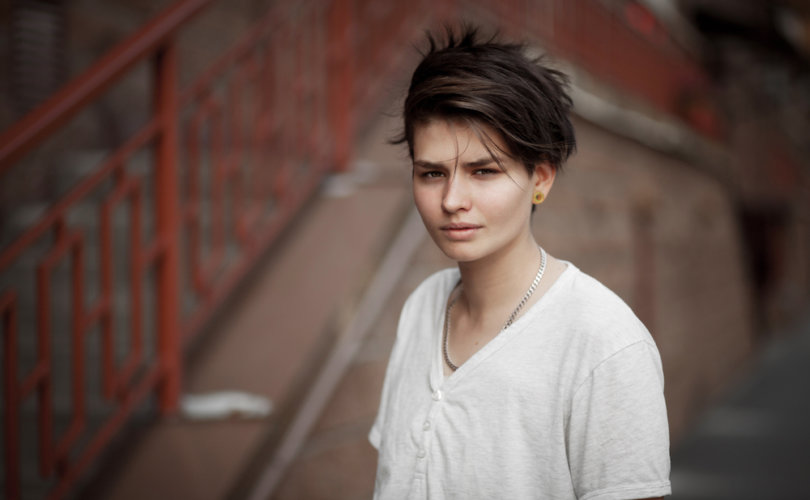 In her paper published on PLOS ONE, Rapid-onset Gender Dysphoria in Adolescents and Young Adults: A Study of Parental Reports, Brown University School of Public Health researcher Dr. Lisa Littman dared to consider the possibility that teenaged boys who think they're girls and teenaged girls who think they're boys might be coming to those conclusions partly because of peer pressure and what they see on social media.

The physician's findings show that teens and young adults who thought they were the other sex starting at or shortly after puberty had something in common: they tended to already be friends.

In her paper, Littman suggested this might be because of social media and peer pressure leading teens to identify as transgender.

In the comments section of the PLoS One website where Littman's report is published, criticism was quickly leveled against her research methods, including the type of questions in her survey and the websites from which parents were recruited to participate in the study.

Brown University, which had a link to Littman's study on its website and had issued a news release about this descriptive study, quickly took it down.

A Brown University spokesman claimed the university made that decision not because of Littman's findings but because of the concerns expressed over the study's methodology.

“We feel strongly that researchers have a responsibility to be vigilant in research design and analysis, especially when there are implications for the health of the communities at the center of our research and study,” said Brown University spokesman Brian Clark.

“This is at the core of our commitment to academic and research excellence. It was this responsibility, not the subject of the research, that informed the decision to remove the article from news distribution as [PLoS ONE] further assesses the study's methodology,” he said.

PLoS ONE is bringing in experts to assess the study's methodology and analyses but has no time frame as to when this review of the study might be completed, said the online journal's spokesman David Knutson.

“This is not about censoring academic freedom or to suppress scientific research,” Knutson claimed. “The broad debate on gender dysphoria led by various parties is clear evidence that such research is needed, and we support this research and are committed as a journal to publish all scientifically valid research on the topic.”

“This is a very recent phenomenon which deserves study,” a blog post on transgendertrend.com, a website for parents whose kids suddenly announce they are switching genders, says. “It is not enough to say ‘transgender people are more visible and more accepted now’, this doesn’t explain the phenomenal increase in girls, nor the onset of gender dysphoria at adolescence. Trans activists deny the existence of Rapid Onset Gender Dysphoria because the suggestion of social contagion or potential underlying causative factors calls into question not only the concept of ‘innate gender identity’ but the ‘affirmation only’ model of care.”

“Given the bullying and silencing tactics of activists towards anyone who questions the new gender ideology and the real threat to people’s jobs and livelihoods if they speak publicly, it is a brave researcher who tackles this subject,” it continues. “It is a failure in our duty of care to these young people to use them for political purposes to support an ideology and to suppress necessary research which would help us assess what kind of clinical support individual youngsters need.”

In her paper, Littman advances two hypotheses. The first is that some teens might be interpreting other symptoms of trauma, psychiatric problems, or normal puberty as evidence they are transgender and be coming to the conclusion that the only path to happiness is to “transition” to the other gender.

They would then also come to believe “that anyone who disagrees with the self-assessment of being transgender or the plan for transition is transphobic, abusive, and should be cut out of one’s life,” wrote the researcher.

Over 4,000 people have signed a petition supporting Littman. The signatories write that they are overwhelming liberally-minded, “but we want better diagnostic and mental health care for youth who suddenly demand serious medical interventions, particularly in the absence of a history of dysphoria. We believe that medical interventions that may benefit some individuals may not help, and may even harm, others, as already evidenced by the growing number of desisters and detransitioners, many of whom have already suffered from irreversible side effects of their earlier medical transition.”