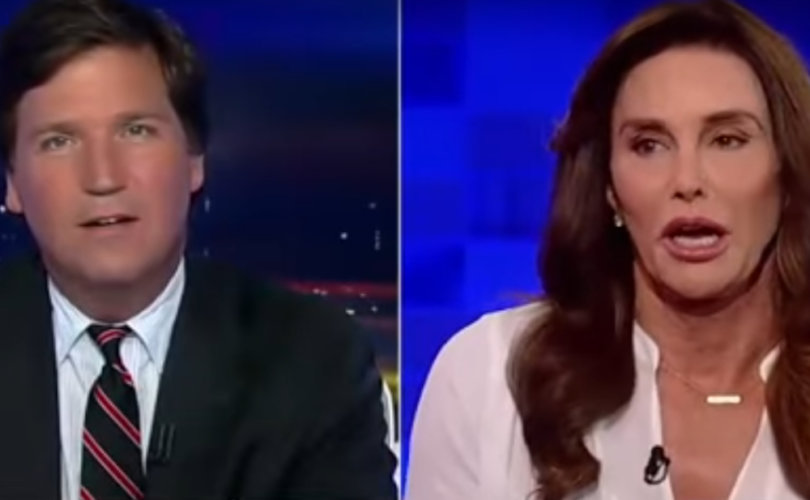 April 25, 2017 (LifeSiteNews) — In his new book and in an interview Friday with ABC 20/20’s Diane Sawyer, Bruce (“Caitlyn”) Jenner — the male former Olympic gold medalist who now believes he's a “transgender woman”— confirms that he had the “Final Surgery” in January to remove his male genitalia.

“The surgery was a success, and I feel not only wonderful but liberated,” Jenner writes in his book released today, “The Secrets of My Life.” He said he’s not going to “dwell” on the “male to female” (vaginoplasty) surgery in which, after the man’s testicles are removed, the skin of the penis is sliced and turned into a makeshift “vagina.”

Jenner said he will not discuss the bottom surgery any further in interviews.

“Yes, I did vote for Trump, but here’s the deal breaker with the Republican Party … you mess with my community, you do the wrong thing with our community, you don’t give us equality and a fair shot, I’m coming after you,” Jenner told Sawyer.

The same action by Trump that Jenner said was “extremely disappointing” was met with widespread approval from conservatives who had expected Trump to end Obama’s unprecedented and aggressive use of federal power to push gender-bending LGBTQ activism in schools.

This was Jenner’s second interview with Sawyer, coming two years after their dramatic first interview in which he confirmed what many were suspecting: that he was “transitioning” to ostensible “womanhood.” Ratings for Friday’s interview were way down from the initial blockbuster 20/20 interview, according to Hollywood Reporter.

Jenner, 67, told Sawyer that his children still call him “dad.” In the book, he writes, “I worry that my transitioning has been harder for them to cope with than they have let on. … Perhaps it is weird to call me ‘Dad’ when I don’t look like Dad.”

Last evening, Tucker Carlson of Fox News also interviewed Jenner in Carlson’s debut show replacing Bill O’Reilly, who was forced out at Fox under a cloud of sexual harassment allegations (which he said were “unfounded”). Fox News, which has a long history of supporting the homosexual and transgender activist agenda and funding an LGBT journalists group, promoted the Jenner interview using female pronouns.

Carlson, whose interviews challenging leftists, academic ideologues and political correctness have gone viral in conservative and social media, went relatively easy on Jenner. He elected not to challenge Jenner on core aspects of “transgender” ideology, as he had in a previous interview with a top Democrat dealing with transgenderism.

Instead, Carlson’s main focus was how a “brave” Jenner was to remain a Republican despite all the flack he gets from “transgender” activists for his GOP affiliation.

“From sex harassment allegations to transgender liberation, it looks like sex sells in, around, and on Fox News. How else do you explain O’Reilly’s replacement Tucker Carlson doing his first big interview with a man who goes under the knife to be a woman? But while sex harassment charges got Bill O’Reilly fired, sexual mutilation is something to be celebrated on the ‘new’ Fox News Channel,” Kincaid, director of the AIM Center for Investigative Journalism, told LifeSiteNews.

Kincaid said he understands Fox’s desire for high ratings “in the wake of O’Reilly’s disastrous firing,” but said the Jenner interview will alienate much of the Fox News base.

“It’s a cheap stunt that exploits a sad human condition – gender confusion based on a mental disorder,” he said. “This is not news, but crass media exploitation of a sickness that used to land someone in a psychiatric hospital. What’s next on Fox News, more circus freaks and human oddities? Is this how they intend to cope with the loss of their most powerful conservative voice?”

Jenner personalized Green’s previous comments in defense of protecting women against men in female public restrooms, taking them out of context to imply that the state senator had called him and other transgender-identified people “evil.”

Carlson, citing the case of a victorious “male-to-female” Australian weightlifter, pushed Jenner on whether it is fair for such “transgender” athletes to compete with natural females given the former’s obvious physical advantages. Jenner denied there were advantages and said Americans should trust athletic bodies like the U.S. Olympic Committee that are paving the way for transgender athletes to compete as their “authentic self” (i.e., living in the identity of the opposite sex).

Yet Jenner’s own book points to the natural advantages that bigger, stronger men have over real women — even after “transitioning” to identify as the opposite sex.

In the book, the 6-foot2 Jenner writes that when he plays golf every Tuesday with a women’s foursome, “I outdrive them by 150 yards and they still like me. In a men’s foursome, I would hear the grumblings of competitive jealousy all the way into the next county.”

Dr. Michelle Cretella, the president of the American College of Pediatricians, a national organization of pediatricians and other healthcare professionals that was formed out of frustration over the political correctness of liberal medical professionals’ organizations like AAP, said Jenner is wrong and that “men are not allowed to compete in women's sports for good medical and legal reasons.”

“Every male who has gone through puberty prior to ‘transitioning’ absolutely has biological advantages over biological women that are not erased by estrogen therapy, most notably, height, bone structure and bone mass,” Dr. Cretella, a Board Certified Pediatrician, told LifeSiteNews.

“Even muscle mass, which estrogen therapy will decrease in biological men, cannot be assured as being the equivalent of what a biological woman of the same size would normally possess,” she said, adding that men “dressed up in chemical and surgical drag” should be barred from participating in women's sports.

Sawyer: a fan or a journalist?

As easy as Carlson went on Jenner, it was harsh compared to 20/20’s Sawyer, who appeared less of a skeptical newswoman than an adoring fan, or perhaps an infomercial host for the LGBTQ media group GLAAD. Beginning with her warm hug of Jenner as he greeted her at his mountaintop Malibu, California home, Sawyer came off as an ally who was clearly invested in Jenner’s newfound “womanhood.”

Her segment with Jenner advanced several “transgender” talking points used by LGBTQ activists to mainstream the “gender non-conforming” lifestyle, including the notion that people are “born transgender.”

ABC cited a study (without giving specifics) in the Journal of Sexual Medicine that found that because a certain percentage of identical twins studied both identified as “transgender,” that shows that genetic factors are a major factor in gender nonconforming individuals.

However, New Zealand researcher Dr. Neil Whitehead, assessing similar studies of identical twins looking into whether homosexuality is genetic, said in 2013, “Because they have identical DNA, it ought to be 100 percent” — in other words, all identical twins should be identically homosexual.

Instead, Dr. Whitehead revealed that “If an identical twin has same-sex attraction the chances the co-twin has it are only about 11 percent for men and 14 percent for women.”

Studies over whether there is a genetic factor in homosexuality are much more common than those about transgenderism. Larger sample studies on the former — more accurate than smaller studies — have tended to debunk “born gay” theories.

Ironically, Sawyer and 20/20 failed to report on another Journal of Sexual Medicine study, in 2014, that found no evidence of a “transsexualism gene.”

Jenner told Sawyer that he has no regrets about “becoming a woman.” However, his ex-wife of 24 years had quite a different reaction to his DNA-denying transformation, scorching the inaccuracy of his tell-all book.

“Everything she [referring to ex-husband Bruce “Caitlyn” Jenner] says is all made up,” Kris Jenner said during a recent episode of the reality TV show, “Keeping Up With The Kardashians.” “Why does everything have to be that Kris is such a bitch and an [a–hole]? I’ve never been so angry and disappointed in somebody in my whole life. I’m done.”

Last year, Kris Jenner was also stunned to learn that her ex-husband had gone back and changed his name and “sex” on his birth certificate (which is legal in California).

“That's kind of sad though,” she said. “Wait a second. Does this mean that he didn't exist if you changed the birth certificate?”

“Wait, was I ever married? Was I legally married?” she said, according to the Daily Mail.

This phenomenon of “transgender” people rewriting their history at the expense of their loved ones was voiced by a parent of a “transgender” child in the comments section to another Daily Mail story on Bruce (“Caitlyn”) Jenner:

“If having a transgender son of my own has taught me anything, it is that when your new gender overtakes your whole life [it] becomes the center point of every decision, conversation, and desire,” said “edup394” of Fairbanks, Alaska.

“What you get is a person with a very egocentric point of view who then starts becoming blind to how any other persons feel or are affected,” said the parent. “And that starts to creep backwards and change the way they remember their past, too, in order to rebuild their psychological structure to support their new, one-sided identity. A healthy person is a person not solely defined by sexual orientation or identity, no matter what those orientations are.”