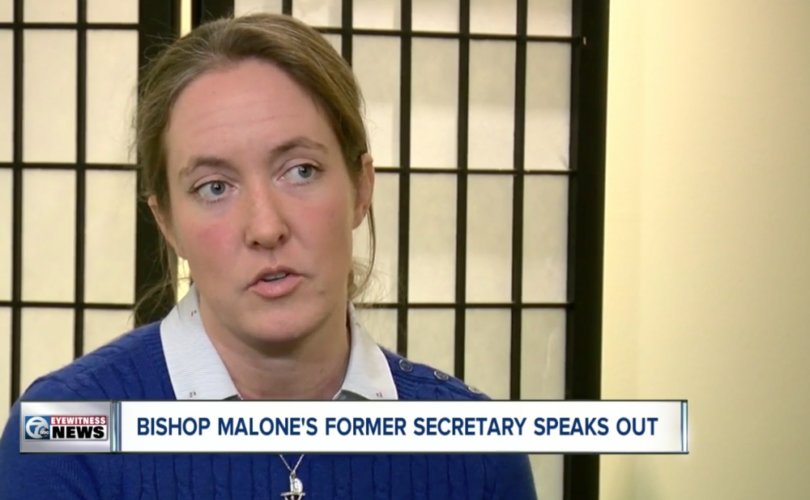 “I had been asked by WKBW [broadcast station] to be outside the Catholic Center at 6 AM,” O’Connor told LifeSiteNews.

The Diocese of Boston emailed several email contacts, she explained, and the message contained six attachments. But instead of the clarity she had hoped for, O’Connor saw yet more confusion: the U.S. nunciature had called the bishop’s resignation “an early retirement,” mentioning nothing about credible allegations that Malone covered up sexual abuse perpetrated by priests in his diocese.

Archbishop Christophe Pierre, apostolic nuncio to the United States, stated in a communique that Bishop Malone, after being made aware of results of an Apostolic Visitation, had “asked the Holy Father Pope Francis to grant him an early retirement,” adding that the “Holy Father has granted his request.”

O’Connor said that this statement was “evasive.”

“We’re still a long way from transparency,” she stated, calling the “euphemism” a “slap in the face of survivors” of clerical sexual abuse.

“It’s another euphemism on [Malone’s] way out,” she added.

O’Connor said she read Malone’s three-page statement and agrees that the bishop minimized his culpability in not addressing the concerns of survivors.

“I was thoroughly disappointed … that he wrote a long self-defence,” she stated.

O’Connor is also dismayed that Malone plans to stay in Buffalo as “Bishop Emeritus.”

“He can’t even leave graciously,” she said.

The former diocesan secretary, who now works as a victims’ advocate, said Malone’s resignation will free Buffalo’s Catholics from having to hear from him, something O’Connor said was a “daily frustration.” People in Buffalo have been so angry with Malone’s failures in addressing clerical sex abuse in the diocese that the bishop “came to represent the worst of the scandal,” she explained. Many Catholics have even ceased to go to Mass, something O’Connor, a devout Catholic, hopes the resignation will reverse.

“I hope people will return to Mass for Christmas,” she said.

In terms of her own feelings, O’Connor says that she is grateful, relieved and admitted to the “exhaustion that comes from relief.” The victims’ advocate has been in the public eye since she came forward in October 2018 as the Catholic Center insider who gave copies of confidential diocesan documents to Charlie Specht, a reporter for Buffalo’s CBS affiliate WKBW.

In the course of her duties as Malone’s secretary, O’Connor had come across memos and personnel files that showed he had allowed priests accused of offenses like unwanted touching and statutory rape to remain in ministry. She even found a 300-page binder of pending litigations stuffed into the bishop’s supply closet. And when Malone produced a carefully curated list of 42 accused priests – none of whom were still in ministry – for public scrutiny, O’Connor knew that there should have been more priests on it. She had seen drafts of the list that had passed back and forth between Malone and the diocesan lawyers. In fact, at least 118 priests of the Buffalo diocese had been accused of sexual misconduct.

After O’Connor was revealed as the Buffalo whistleblower, she joined the survivors of clerical sexual abuse who protested outside the Catholic Center. O’Connor told LifeSiteNews that one benefit to Malone’s resignation is that she and the survivors won’t feel duty-bound to protest in Buffalo’s harsh December weather. She’s looking forward to the rest.

“It’s an early Christmas gift, for sure,” she said.

O’Connor said that she was looking forward to Bishop Scharfenberger’s press conference today and added that she was pleased that the new Apostolic Administrator, the Bishop of Albany, “knows that this diocese is full of engaged, knowledgeable laypeople who stand with survivors.”

O’Connor is a graduate of Christendom College in Front Royal, Virginia, where she stayed on as an executive assistant for its president. She then entered a convent belonging to the Nashville Dominicans but “discerned out” after six months.

O’Connor next earned a Masters in Childhood Education but took up social work when she discovered that the teaching market in Buffalo was “bleak.” After leaving her subsequent job with the Diocese of Buffalo, O’Connor tried her hand in the insurance business. This time she discerned that sales were not her forte. She returned to social work for a year before finding her true vocation: victim advocacy.

Since September, O’Connor has worked for the “Zero Abuse Project”, a non-profit founded by prominent lawyer Jeff Anderson to help survivors of sexual abuse and to work towards “a world where every child is free from abuse.” O’Connor works with survivors of abuse to help them navigate the difficult civil process of obtaining justice.

“I feel as though God led me this way,” she said of her new work. “I didn’t even know that this kind of job could exist.”

O’Connor told LifeSiteNews that in the coming months she will continue to stay engaged by seeing how Bishop Scarfenberger leads the diocese. She will also be using the time she would have spent protesting Bishop Malone, had he not resigned, in prayer. Finally, she plans to remain “vigilant” on behalf of clerical sexual abuse survivors.

There are over 220 lawsuits pending against the Buffalo Diocese.