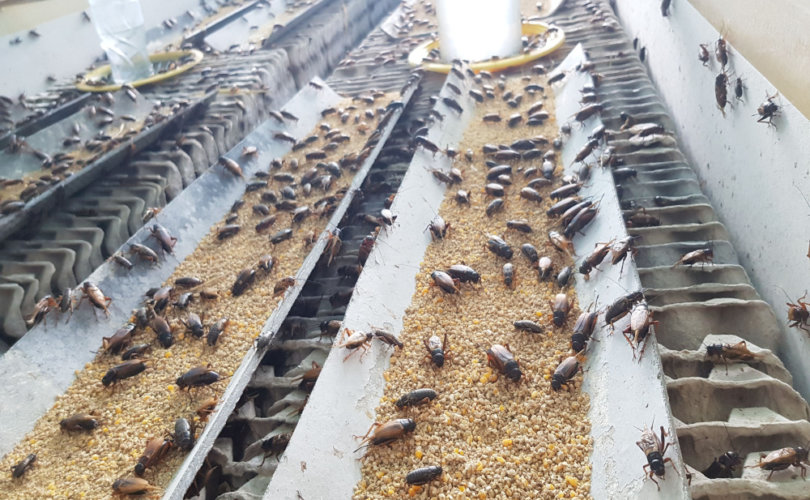 “Mega corporations shouldn’t be buying up all our farmland. Governments shouldn’t be interfering in how we farm. Bugs are not beef. Let’s stand up for farmers and protect our food security,” Lewis tweeted Saturday in reference to a report about a government-subsidized cricket farm being opened in Canada.

The cricket farm recently came online and when fully operational will be able to make 13 million kilograms of crickets for “human and pet consumption.”

Lewis, in a recent platform blog update, wrote that with the “announcement of the world’s largest cricket processing plant being built in London, Ontario,” farmers are “concerned about the survival of their industry.”

“Watching the clashes in Holland between the agriculture industry and their government has understandably made them wonder if the same scapegoating of their industry is on the way to Canada,” Lewis wrote.

Lewis added that the “demonization” of Canadian farmers’ products through “red tape, negative product labels, and high carbon taxes” is a “deliberate attempt by this Liberal government to cancel the agriculture and livestock industry.”

“Livestock farmers had to fight the Liberals’ plan to put fat warning labels on ground beef and pork, while not doing so on patented artificial meat products that contain higher fats from canola and industrial seed oil, which is far worse than natural animal fat,” Lewis wrote.

In Lewis’ update, she noted how the trend to push farmers from their land can trace its roots to the United Nations’ 1993 “Convention on Biodiversity.”

“It has (Convention on Biodiversity) opened the door for the movement away from private property, and created a concentration on ownership of patented plants and livestock into the hands of biotech companies,” Lewis wrote.

“The push by some to eliminate natural meat is based on the fact that raising livestock is considered unsustainable and requires large amounts of land, thereby creating a large carbon footprint.”

“(Gates and Turner) are buying up farmland and putting small family farmers out of business. This is making us more dependent on importing food and restricting our output,” Lewis wrote.

“Canadian farmers are an essential part of the global food supply chain, and they should have been exempt from the carbon tax in order to assist with global food security.”

“It’s key to our national sovereignty, and the literal health of our country,” Lewis wrote.

“A Lewis-led government will always stand up for Canadian farmers and our agriculture sector.”

The Great Reset of Klaus Schwab and his World Economic Forum (WEF) has as part of its agenda the promotion of eating bugs to replace beef, pork, and other meats that they say have high “carbon” footprints.

“Four primary schools in Wales, U.K., recently conducted a real-world trial to see how children would take to eating mealworms, crickets, beetles and other insects, while simultaneously being indoctrinated to think they’re becoming ‘ethical citizens’ who are saving the planet by ditching meat,” Mercola noted.

“Being able to see the globalists’ plan as clearly as we can see it now, we have an obligation to future generations to resist, denounce and refuse any and all implementations of the technocratic agenda.”