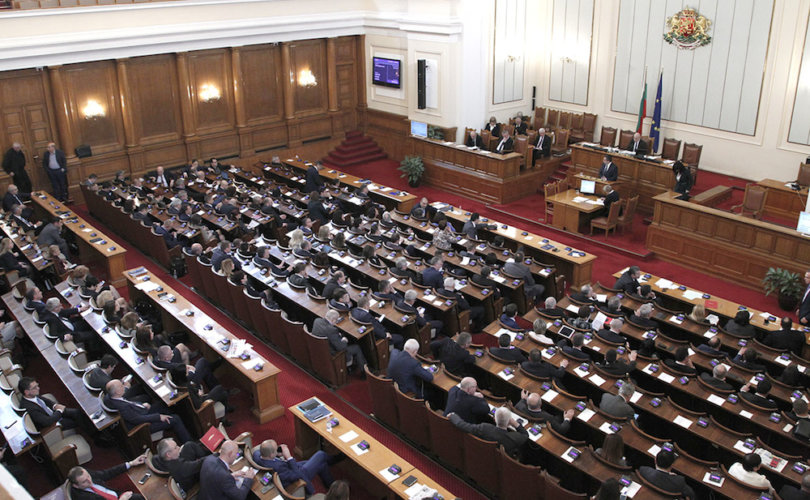 SOFIA, Bulgaria, November 29, 2018 (LifeSiteNews) – ADF International and a coalition of Bulgarian churches filed a formal request with the Secretary General of the Council of Europe demanding a review of a proposed Bulgarian Law on Religious Denominations currently being debated in Parliament.

For weeks now, thousands of Christians have gathered each Sunday before the Bulgarian Parliament building to protest and pray against the proposed law and the restrictions it would impose on religious practice.

“Nobody should be persecuted or experience harassment because of their faith,” said Viktor Kostov, a Sofia-based lawyer and ally of ADF International who is representing the Bulgarian churches. “The new law on religion in Bulgaria restricts religious minorities from assembling freely for worship, engaging in theological education, and receiving funds from outside Bulgaria. If adopted, it would stifle the missionary and spiritual activity of foreign citizens.”

The proposed law requires newly registered denominations to have at least 3,000 members before they can gain legal rights, discriminating against smaller minority groups. Additionally, preachers, clergymen, and any foreigners wishing to participate in worship would have to register with the state or risk penalties.

Earlier this month, a meeting between two parliamentary groups, Prime Minister Boiko Borissov’s GERB and the Movement for Rights and Freedoms, heard objections from various faiths. These submissions have caused political parties in Bulgaria’s Parliament to take stock and reconsider the proposed Bulgarian Law on Religious Denominations before it is put to a second reading.

In the initial draft of the proposed law, there was a ban on foreigners and people with foreign religious qualifications conducting religious services unless they had permission from the state-run Religions Directorate. This stipulation has now been shelved. Instead, foreign clerics with short-term residence in Bulgaria  between three to six months will be allowed to conduct services. However, a foreign cleric coming to Bulgaria for a short stay of a few days would still have to notify the state’s Religion Directorate if planning to conduct a religious service.

For religious groups that are truly international such as the Catholic Church, this makes the provision of pastoral care in Bulgaria needlessly hampered by bureaucratic controls.

The proposed Bulgarian Law on Religious Denominations has also been amended to continue to allow anonymous foreign donations to religious groups within Bulgaria.

The reason Bulgaria’s parliament has started to move to limit and restrict religious activity is largely in reaction to the spread of radical Islam. However, not to be seen to be directly discriminating against Muslims, the Bulgarian authorities have by default restricted the activities of all minority faiths within Bulgaria, including Catholics and other Christian denominations as well as Jews.

Many see this latest legislative approach in the Bulgarian parliament as being wholly ineffective in curtailing the threat of Islamic terrorism, however, but a real threat to religious freedom in Bulgaria. Ironically, because of Muslim numbers in Bulgaria, the proposed law would have had a disproportionate effect not on Muslims but on smaller groups such as non-Orthodox Christians and Jews.

“We have repeatedly requested that the MPs behind the bill amend or remove the worst aspects of the law (but) without success,” Kostov said. “The proposed law represents a fundamental attack on freedom of religion in our country.”

The lack of progress nationally has meant that the proposed law’s opponents have taken their concerns to European bodies. As Kostov explained, “As the Parliament has not acted to protect the rights of minority religions, we were left with no option but to seek a review of this law’s compatibility with international law. We have directly called on the National Assembly to adjourn further votes on this legislation until this has taken place.”

With the assistance of ADF International, a global human rights organization, the coalition of Bulgarian churches represented by Kostov has appealed to the Secretary General of the Council of Europe to refer the proposed law to the Venice Commission. This is an advisory body of the Council of Europe on constitutional matters. It ensures that all Council of Europe Member States bring their legal structures and laws into line with accepted European standards. ADF International and its allies want the Venice Commission to carry out an urgent review of Bulgaria’s Law on Religious Denominations.

“The European Convention on Human Rights secures the right of the people of Bulgaria to worship freely without unjustified interference. This request calls for urgent attention to the proposed Bulgarian law,” said Lorcán Price, legal counsel for ADF International.

“This latest proposed law will interfere with the right of Bulgarian churches to conduct their business without burdensome regulation and restrictions. Nobody should be deprived of the fundamental right to religious freedom. As the European Court of Human Rights has ruled in the past, the government should not engage in ‘picking favorites’ when it comes to churches,” Price said.