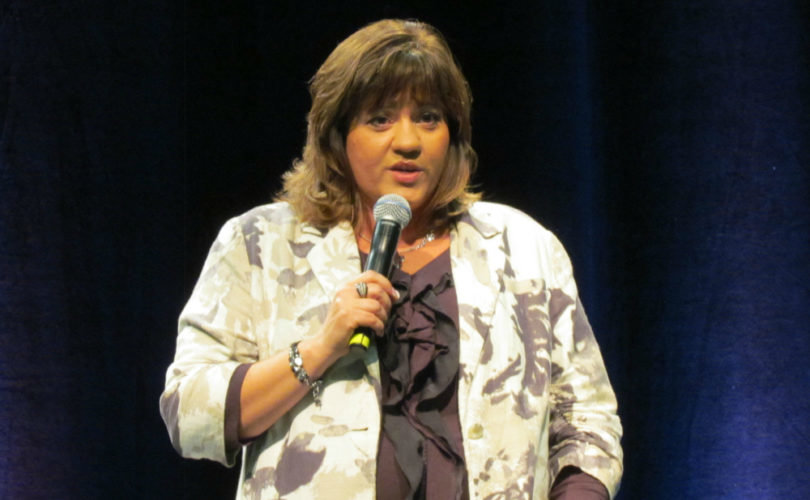 She was conceived in rape and dedicated her life to telling young people the hidden costs of being sexually active. But abstinence speaker Pam Stenzel has been bullied into silence, this time by a few outspoken parents, a handful of students, and what some say is a biased local media that resulted in the cancellation of two of her talks.

Stenzel was scheduled to give two presentations yesterday to students at Warwick High School and middle school and a third evening presentation in Lititz, a southeastern Pennsylvania town just north of Lancaster.

Instead, Stenzel gave only the evening presentation last night to approximately 500 students. But some activists in the area think that is far too many.

The school district invited Stenzel after she gave a well-received presentation in April 2006. A local business agreed to pay for the speech, which focuses on abstinence, to augment the school's “comprehensive sex education” curriculum. Parents would be allowed to opt their children out of attending the session at either location.

But that was not enough for a vocal minority of those who oppose a message that focuses on avoiding all sexual activity.

One parent, Marie Firestone, told Lancaster Online that Stenzel's abstinence-only message is a “completely and totally irresponsible choice for a public school.”

Another area resident, Allison Lakehart-Childs wrote to Superintendent April Hershey that being able to opt out of the assembly “completely misses the point. I do not want any students exposed to Ms. Stenzel’s hate speech.”

Lancaster Online reporter Kara Newhouse repeatedly stated that Stenzel told an audience in West Virginia, “If you take birth control, your mother probably hates you,” and “I could look at any one of you in the eyes right now and tell if you're going to be promiscuous.”

“I never in my life said that,” Stenzel told LifeSiteNews at the time. “I say the same thing over and over again. You can go listen to it yourself; my talks are all over YouTube. What I said was that if you are on birth control, you are at a greater risk of becoming infected with an STD.”

George Washington High School principal George Aulenbacher also told the Charleston Gazette that he attended Stenzel's presentation and “didn’t hear anything like that.”

Newhouse did not report either Stenzel's denial nor Aulenbacher's confirmation of her account contained in the story she quoted. (Newhouse has a history of involvement in far-Left and “feminist” political movements. The details are here.)

The school district said that a tiny minority of parents “with differences of opinion used what can only be described as bullying tactics through social media to personally attack individuals, to attempt to discover the name of the business contributor in order to boycott and/or picket the business, to threaten the continued use of the local media and the additional use of national media to ‘make an example’ of the district, to continue to spread inaccurate and inflammatory information, and as a platform for planning to create an unsafe environment for our students.”

Stenzel told LifeSiteNews that the opposition “really was a small group – less than a handful of people – but they were being really loud, and they wouldn't let it go.”

Colin Hearn, program director of Enlighten Communications, which helps book Stenzel's speaking appearances, told LifeSiteNews, “Some of the parents were opposing her. A lot more were for her.”

“The administration supported Pam 100 percent,” Hearn said. “The school administration just saw some activity on social media and were a bit concerned” and called things off “when it started to get into a problem of a safety concern.”

“We don't want to disrupt the school. That's not our intention at all,” Hearn told LifeSiteNews. “Education is tough enough as it is.”

Some of the parents said they were offended that Stenzel, who has two different presentations for church and secular groups, would bring her religion into the school environment. “I'm not bringing faith into it at all – never have, never will in a public school setting,” Stenzel told LifeSiteNews. She merely feels that students “should have all the information available” about the consequences of sexual activity.

Others claimed that Stenzel “was misrepresenting the facts” about the prevalence of sexually transmitted diseases and other dangers, Hearn told LifeSiteNews. He likened the opposition to “an uninformed voter,” who votes straight-party. He's upset “that people won't look at the facts.”

If anything, he said, statistics show that “actually, she underrepresents it.” For instance, more than two-thirds of all the nation's 1.4 million cases of chlamydia occur among young people age 15-24, according to the Centers for Disease Control and Prevention.

She included such facts in her talk to hundreds of students last night – and the fact that abstinence outside of marriage is the only known, effective way to prevent sexually transmitted infections.

“I could have sex a million times if my husband has only been with me and never use a condom and I will never get an STI,” she told the group. According to Lancaster Online she told the students she had no intention of making their choices about sexuality for them. “All we can do is love you, tell you the truth, and hope you make good choices.”

She addressed the controversy over the speech's cancellation, as well. “Pam Stenzel didn't lose today. Your kids did,” she said, according to Lancaster Online. “And that's too bad.”

After the young people heard her presentation for themselves, they responded with a standing ovation.

Stenzel told LifeSiteNews that she has received “vulgar” comments from her critics, who had never listened to her talk or heard only snippets on YouTube.

“They talk about tolerance,” she said. “They're the most intolerant people.”