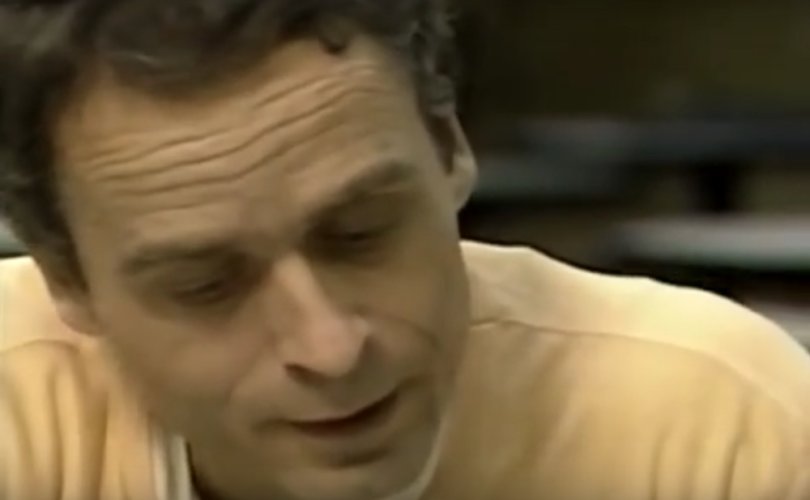 SAN FRANCISCO, California, July 25, 2016 (LifeSiteNews) — When serial killer Ted Bundy’s death-row interview linking his crimes to pornography was released after his 1989 execution, it was easy to dismiss as Christian moralizing. But now that the short, compelling video has resurfaced on social media as part of a new, secular, science-based, anti-pornography movement, it is much harder to ignore.

“This video is a radical example of the impact of pornography,” Clay Olsen, the CEO of FightTheNewDrug.org, readily acknowledged. “We don’t argue at all that pornography use leads to serial killing. We do argue that it impacts most users in three serious ways — hurting them in the brain, the heart and in the world at large.”

Bundy became a born-again Christian as his execution neared, and he consented on the night before his death to the interview with Focus on the Family founder Dr. James Dobson — two reasons for the popular culture to dismiss the interview in which Bundy argues that pornography led him to murder as a way to achieve sexual pleasure.

“I would keep seeking the more potent, the more explicit, the more graphic kinds of pornography … the kind that involves violence,” he told Dobson in the interview, later adding that, while he was not a social scientist, he had spent many years in jail, “and I’ve met a lot of men who were motivated to commit violence just like me, and without exception every one of these men was deeply involved in pornography and without question deeply was influenced and deeply compromised by an addiction to pornography.”

“Science has finally caught up with truth,” Olsen explains.

What religions have long preached as immoral and medical practitioners and others have anecdotally warned against has now increasingly proved to be the case. Pornography is harmful.

“It’s very analogous to tobacco,” Olsen told LifeSiteNews. The link between tobacco and cancer was shown in the 1930s but not accepted for decades. Policy responses took even longer.

Olsen’s non-profit was started in 2008 by a group of Utah State University students who became aware of the new discoveries in neuroscience on behavioral addictions, which work through building a dependency on chemicals such as dopamine produced inside the brain itself.

When the brain becomes dependent on dopamine delivered by pornography use, it becomes less able to derive pleasure from sexual intercourse with the opposite sex, leading to marital and relational breakdown or an inability to form relationships in the first place, Olsen’s website explains.

Another website, Yourbrainonporn.com, targets sex addicts motivated by their sexual impotence to kick the habit. Both it and FightTheNewDrug share a commitment to a science-based approach that steers clear of religious morality as a tactical choice. “Our staff and represent a wide spectrum of religious viewpoints and those with no religion,”  Olsen said.

But when nudged only a little, Olsen admits that the groundswell could well lead to laws and restrictions as happened with tobacco. “There was a time when cigarettes were sold from machines sitting outside stores — any eight-year-old could pop in a quarter and get a pack. Now nobody at any age can buy cigarettes not knowing it is harmful. That is where we’d like to be with pornography.”

A transcript of the Dobson-Bundy interview is available here.