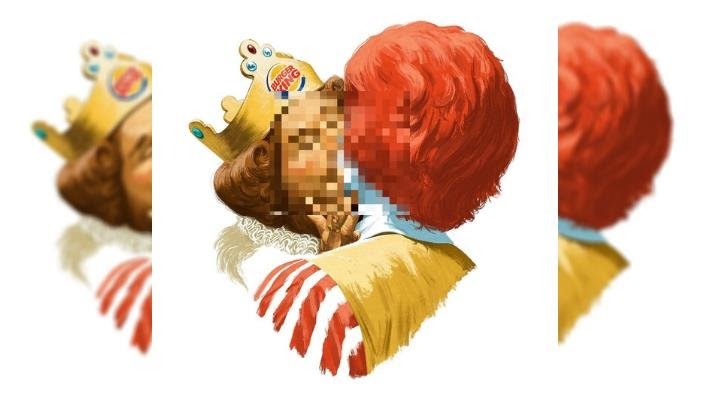 Burger King Finland launched the ad to celebrate Helsinki Pride Week, which just ended. The pro-homosexual celebration normally takes place in June but was postponed because of the coronavirus outbreak.

The ad shows the Burger King’s full face as he “kisses” and puts his hand on the face of what appears to be Ronald McDonald.

While Ronald McDonald’s face cannot be seen, he is identified from his trademark red hair, striped shirt, and yellow vest.

At the bottom of the ad, the phrase “Love Conquers All” can be seen with a new version of the “gay pride flag” that made its debut in 2017, featuring black and brown stripes, and has used by some in the Black Lives Matter movement.

An Adweek report from last week quoted Burger King Finland brand manager Kaisa Kasila as saying “Burger King has always stood for equality” and that it’s “everyone's right to be just the way they are.”

“What … better way to convey our values than by portraying an all-encompassing kiss between Burger King and McDonald. We wanted to show that in the end, love always wins,” Kasila told Adweek.

Fernando Machado, RBI’s global chief marketing officer, was quoted as saying in the Adweek report that “diversity and inclusion” are “cover values at Restaurant Brands International.”

“We believe that a wide range of diverse voices and perspectives makes us a stronger company,” Machado told Adweek.

Machado also said he was “proud of the fact” that RBI has a Corporate Equality Index (CEI) from the pro-LGBT Human Rights Campaign Foundation (HRC Foundation) “of 100 percent.”

The HRC Foundation’s website says they are “a roadmap and benchmarking tool for U.S. businesses in the evolving field of lesbian, gay, bisexual, transgender and queer equality in the workplace.”

Advertisements featuring the “gay kiss” between the Burger King mascot and Ronald McDonald have been placed all over Helsinki. The ad also appears in local Burger King restaurants, and are front and center on Burger King Finland’s Facebook and Instagram pages.

While the ad features McDonald’s well-known mascot, it appears that it was not done in collaboration with McDonald’s, one of Burger King’s biggest competitors.

Machado said he hopes “the other guys” “understand that it's celebrating “love.”

“We hope that ‘the other guys’ understand that it is actually a celebration of love rather than a competitive statement,” Machado said in the Adweek report.

This is not the first time Burger King has promoted the homosexual lifestyle.

In 2014, a San Francisco Burger King franchise featured its signature sandwich, the Whopper, with a rainbow wrapping with the words, “The Proud Whopper” in a marketing stunt designed to promote homosexual “pride.”

Sept. 18, 2020 update: This report has been updated with information about the new version of the “gay pride flag” that features black and brown stripes.