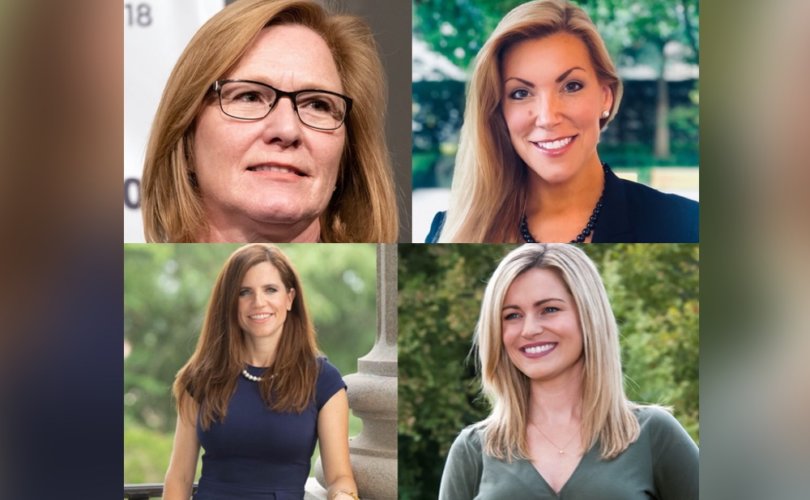 February 18, 2020 (LifeSiteNews) – Four women are running for Congress as the “conservative squad,” hoping to be a foil to the four left-wing Democrats who are collectively known as the “squad” or sometimes the “socialist squad.”

“I won’t just drain the swamp – I’ll burn it down,” Taylor says in one of her viral campaign ads. She is featured torching the “sham articles of impeachment” with a (presumably theatrical) flame-thrower that says “TRUMP.”

“We need a new generation of conservatives to push back against radical socialism,” Taylor said when she launched the “conservative squad.”

“Young people are embracing socialism and they need to know that conservative ideals lead to freedom and prosperity and that socialism is not the answer. Socialism leads to less freedom and oppressive government. It has failed in every country it has been tried.”

Who's ��'d up about the do-nothing Democrats wasting so much time on this sham impeachment?

Want to know how I really feel about all this time we've wasted?

Van Duyne’s website announces her as a “Christian. Conservative. Mother.”

Fischbach’s campaign site touts her 100 percent rating from Minnesota Citizens Concerned for Life, which she earned during her time in the state legislature.

“We must protect the unborn, who have the fundamental right to life, and defend the sanctity of innocent human life at all stages,” she says. “I will stand up to efforts by the radical left to promote infanticide and taxpayer-funded abortions for illegal immigrants. I am proudly pro-life and will always support legislation that protects innocent human life and defends the sanctity of life at all stages.”

“I’m pro-life and believe we should defend life and liberty from conception to natural death,” Mace’s website says. However, as a state representative, Mace successfully lobbied to add a rape exception to South Carolina’s heartbeat bill. She has publicly spoken about being sexually assaulted at age 14 and raped at age 16.

Rebecca Kiessling, a pro-life attorney who was conceived in rape, testified before the South Carolina Senate as it was considering the bill. She’s still working to have the rape exceptions removed. She commented that Mace “isn’t advocating that rape victims should be able to pay someone to kill their rapists, just their innocent children.”

Nevertheless, all four of the conservative women offer a stark contrast to the left-wing, pro-abortion, anti-Trump positions of Reps. Alexandria Ocasio-Cortez, D-New York; Ilhan Omar, D-Minnesota; Ayanna Pressley, D-Massachusetts; and Rashida Tlaib, D-Michigan. Ocasio-Cortez has made a name for herself championing socialism.

In February 2019 while speaking about environmentalism, she said, “Our planet is going to face disaster if we don’t turn this ship around. And so it’s basically like, there’s scientific consensus that the lives of children are going to be very difficult, and it does lead, I think, young people to have a legitimate question: should – is it OK to still have children?”

Omar has tweeted her support of taxpayer-funded abortions for illegal immigrants and has said those who are against killing preborn humans in the womb “criminalize women for existing.”