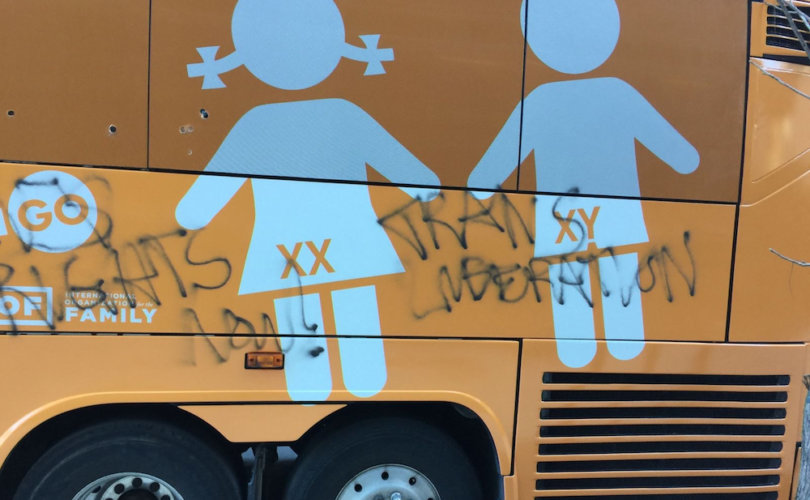 WASHINGTON, D.C., April 7, 2017 (LifeSiteNews) — After a tour riddled with gay violence, the “Free Speech Bus” made its final stop in Washington D.C., on Tuesday.

“As we reflect back on the tour, it is clear that the #FreeSpeechBus highlighted the vicious intolerance shown to anyone who expresses dissent regarding the transgender agenda,” the CitizenGO website explained. “Gender ideology advocates made it clear that they will stop at nothing to silence those who support the message of the #FreeSpeechBus.”

The point of the bus is to proclaim the truth that gender “is determined by biology rather than by emotions and feelings,” Brian Brown of the National Organization for Marriage and the International Organization for the Family said. The call is for “all Americans to respect the free speech rights of citizens to debate these issues without fear of being demeaned, harassed, or threatened with retaliation.”

“Our objective with this bus tour is to spark a public conversation about the truth of gender and to hit 'pause' on the headlong rush by the left, the media and activist judges to redefine gender in the law,” Brown explained.

The Free Speech Bus drove from the United Nations in New York City to New Haven, Connecticut, Boston, Philadelphia, and Washington, D.C.  As the bus stopped in each city, a rally and a press conference were scheduled.

At many of the stops, the bus was met with violent LGBTQ activists.

From the start, the bus was attacked in broad daylight right in front of the United Nations. Its windows were smashed with a hammer, its sides spray-painted with vandalism, and its exterior cut and scraped with keys. Even the bus driver was physically assaulted and injured.

All for saying boys and girls are different.

“This is what those who pretend to preach tolerance actually feel about … other viewpoints,” Joe Grabowski of the National Organization for Marriage told LifeSiteNews. “This is the kind of intimidation that is used to try to cow people who believe in traditional values not to speak out.”

The bus was threatened on social media viciously and repeatedly. One tweet read, “Bring your creepy hate bus to Boston. We'll set fire to it.”

The pro-marriage and family advocates responded with gentleness. One pro-family organization created a hashtag: #gottolerance?

Stalled but not undaunted, the bus was repaired and off to Harvard. Ivy League students attacked the bus, scrawled graffiti on it, broke a tail light, keyed its exterior, threw meat on it, and tucked food under its windshield wipers. One angry man made obscene gestures on camera at videographers in a vain attempt at censorship.

In Boston, gay activists tried to physically block the bus and stop it from moving. One angry protester threw hot coffee inside the bus on the driver.

Then it was on to Connecticut, where a bus photographer was ambushed from behind and punched repeatedly.

The mayor's office in Philadelphia organized protests against the Free Speech Bus that turned violent. Anti-free speech “anarchists” even attacked police, who were trying to maintain order. Bus organizers “were prevented from speaking freely to the press” in the name of tolerance.

“The same individuals and groups who want to fly the flag of tolerance and acceptance are far from tolerant when it comes to dissenting views,” A CitizenGO press release noted.  “All we ask for is respect for our views and the opportunity to voice them in accordance with the First Amendment.”

“The attacks on the #FreeSpeechBus show that intolerance and hatred against those who disagree with gender ideology dogmas is increasing,” the website concluded. “As a consequence, the fight for liberty, freedom of religion, and freedom of speech is more urgent than ever.”

Some gay activists even created a video game for players to vandalize, punch and kick a Free Speech Bus until the tires and windows fall off.

CitizenGO media officer Gregory Mertz told LifeSiteNews that he personally had received so many phone threats he became hesitant to answer his press line.

“Proponents of gender ideology refuse to debate the scientific basis for their gender theory and instead resort to vicious character attacks on anyone who opposes them,” CitizenGO president Ignacio Arsuaga explained in a press release.

“A recent scientific report from researchers with Johns Hopkins University found that there is no scientific basis for the idea that someone could be ‘trapped in the wrong body’ and that almost everyone who experiences feelings of gender confusion will outgrow them by the time they complete puberty. Yet LGBT activists have pushed their gender agenda into the schools, teaching children.”

“It’s biology, not bigotry,” Brown said. “Rather than perpetuate a lie that gender can be changed based on emotions and feelings, we should encourage people to embrace and love who they were made to be.”

“It's time that average citizens, including parents and grandparents, speak up to stop this dangerous push to deceive our children and grandchildren and subject them to harm.”

In Spain, an identical Free Speech Bus has been halted by authorities and the CitizenGO website was shut down by hackers. Former First Daughter Chelsea Clinton also spoke against the bus, tweeting, “Please don't bring these busses to the U.S. (or anywhere)”

The idea for the Free Speech Bus came from a transgender public poster showing four naked children with exchanged genitals. It read, “There are girls with penises and boys with vaginas. It’s that simple.” Chrysallis, the poster's publisher, received funding from a New York businessman.