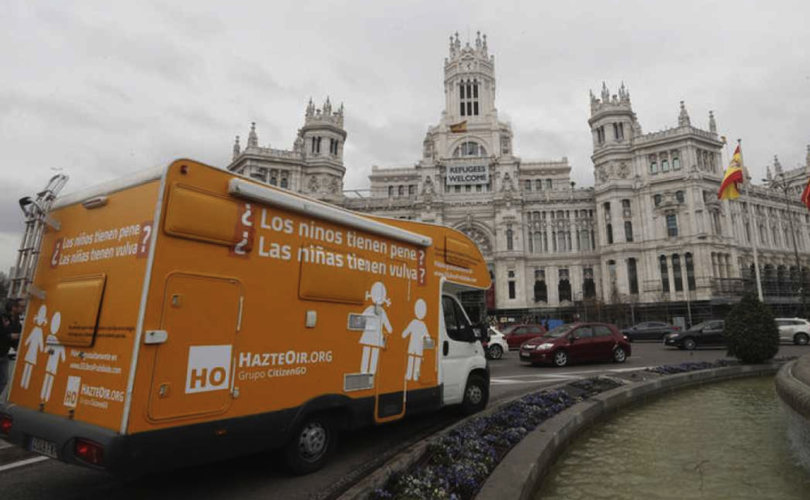 March 7, 2017 (LifeSiteNews) — Last Monday, the Spanish NGO Hazte Oir announced a campaign to drive a bus on the streets of Madrid displaying the self-evident truth that “Boys have penises. Girls have vaginas. Don't let yourself be fooled.” Hazte Oir's graphics were not explicit and merely used easily recognizable icons to depict boys and girls.

The recent campaign was modeled in response to one launched by a Spanish NGO in the northern provinces of Navarra and Euskadi earlier this year, which showed graphic drawings of “boys” with vaginas and “girls” with penises running in a field.

Hazte Oir's bus was hired to promote a booklet that is being distributed to parents warning them of the government-sponsored gender ideology that is being pushed in most of Spain's public schools.

Notably, the graphic pro-transgender campaign was allowed to be displayed in public spaces such as buses and metro stations, and was generally lauded by the media. On the other hand, Hazte Oir's message has been characterized as hate speech by the media and members of the government, who have dubbed it the “hate bus.”

The message has caused a firestorm on social media. Those behind the campaign have received numerous violent threats, including against their lives, as an audio recording of one message left on the Hazte Oir's voice mail shows. People have also threatened arson and assault, while other threats are too graphic to include in this article.

By Tuesday, the local government of Madrid issued a resolution against the bus, and by Wednesday, without obtaining a court order, the bus was detained by police acting on the mayor's order and prevented from leaving its parking space. In a coordinated effort, the district attorneys formally announced that it would seek to impose a four-year sentence on those responsible for the bus based on hate speech crimes.

On Thursday, the judge assigned to the case dismissed the hate speech claims but ordered the bus to be detained until it changed its messaging, modifying the district attorney's charge of hate speech to one of “disparagement.”

On Friday, not having use of the bus but not dissuaded by the government's repression of its free speech, Hazte Oir rolled out a smaller RV containing the same messaging, with the exception that the period at the end of each assertion was replaced by a question mark. The group plans to attend its court hearings in the RV.

Spain has seen a wholesale adoption of the LGBT “anti-discrimination” legislation (detailed in Hazte Oir's booklet, available in Spanish here) that has resulted in public schools throughout the country being forced by law to teach children in primary school that there is no biological link between sex and gender.

Leading the charge in this most radical version of LGBT activism has been Spain's newest political party, which was born out of the Spanish version of the Occupy Wall Street movement. The Podemos Party (Yes We Can Party), which has vowed to outlaw Spain's popular Holy Week celebrations and is unapologetically supportive of Marxism, has led attempts to use anti-hate speech legislation against Hazte Oir for its bus campaign.

In an Orwellian moment, Rita Maestre, spokesperson for the city government of Madrid, appeared on television to inform reporters that the bus was inciting hatred and the city was going to exhaust all options to apply the hate speech code to its fullest extent.  This same woman had been caught on camera breaking into a Catholic church, stripping down to her underclothes and chanting “You will burn like you did in 1936” and “we're going to burn down the bishop's conference” while haranguing the priest during the celebration of the Holy Mass.

Confronted with her actions at the church, Maestre described it as a peaceful protest. Other members of the Podemos Party have been in hot water for real hate speech.  One particular egregious example was a tweet by Guillermo Zapata, Madrid's minister of culture who joked that the best way to fit 5 million Jews into a 600 (a small Spanish car) was to put them in the ash tray.  Mr. Zapata resigned his position but was not charged with a hate crime.

The bus, which has received front page coverage in all major Spanish newspapers and on all television newscasts, has captivated the nation for the last week. It has faced a barrage of attacks from such unsavory characters as a hardcore pornographer and the anonymous hacker group, which has launched numerous DOS (Denial of Service) attacks to take down the group's website.

Translation: “We cannot tolerate Hazte Oir's homophobic propaganda. We will crash their site so they cannot collect signatures.”

The campaign also has received plenty of international coverage, even prompting Chelsea Clinton to publish a tweet imploring the bus to be kept from coming to the United States or anywhere else.

Please don't bring these buses to the U.S. (or anywhere). https://t.co/WEvIIptmxf

The group quickly responded by calling upon its activist base to support them in taking a bus on a tour of major cities in the United States, even offering a first rendering of an English-language version of what they are calling the Free Speech Bus.

Hazte Oir president Ignacio Arsuaga, an attorney who founded the organization fighting Spain's legalization of abortion, has responded to the attacks of his campaign by reiterating the motto of his organization, which is translated as “never doubt that a small group of informed and committed citizens can change the world.”

Today, Hazte Oir informed its followers that it will drive its RV to file complaints against Madrid's mayor, health minister and spokesperson for the suppression of free speech and threats made against the organization.