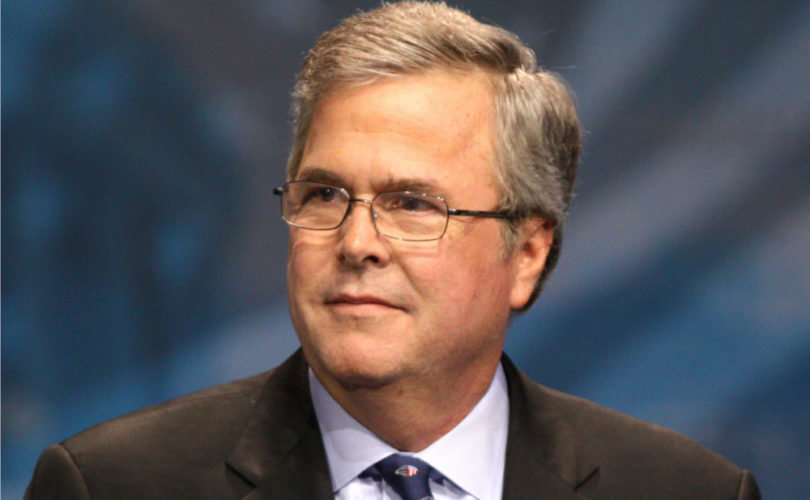 MILWAUKEE, November 11, 2015 (LifeSiteNews) – His campaign is considering buying $20 million in ads attacking Marco Rubio for opposing killing unborn babies in cases of rape and incest – but that doesn't mean anyone should question Jeb Bush's commitment to life, his campaign said.

The former Florida governor's Right to Rise PAC previewed two anti-Rubio attack ads for New Hampshire voters last month, one of which highlighted Rubio's philosophical opposition to abortion in the cases of rape and incest.

Upon hearing of the plan, the Rubio campaign told LifeSiteNews, “Marco believes that all life is worthy of protection, and is proud of his 100 percent pro-life record.”

Now, Bush's campaign is backtracking, telling the media that Jeb would govern as a pro-life president.

As president, Bush “would actively promote his pro-life beliefs just as he did as governor,” Jeb's campaign manager, Danny Diaz, told The Daily Caller after last night's debate in Milwaukee.

Diaz said it is “well known, well understood” that “Governor Bush has the most competent pro-life record on the stage.”

What about the anti-Rubio ads? “The reality is that these are outside organizations,” Diaz said.

Legally the super PAC, which has taken in more than $100 million, is separate from the formal Bush campaign structure. In practice, the two entities coordinate more closely than ever. For instance, Diaz was employed by Jeb's super PAC, called Right to Rise, before joining Jeb's campaign staff in June.

Analysts believed Jeb needed to revitalize his campaign going into last night's debate, which centered on economic issues. But viewers felt this performance was his worst of the three debates so far. A Drudge Report poll rated Bush dead last, behind Ohio Governor John Kasich, who frequently interrupted the moderators.

Another poll from Google Consumer Surveys had similar results, with Bush and Kasich switching roles.