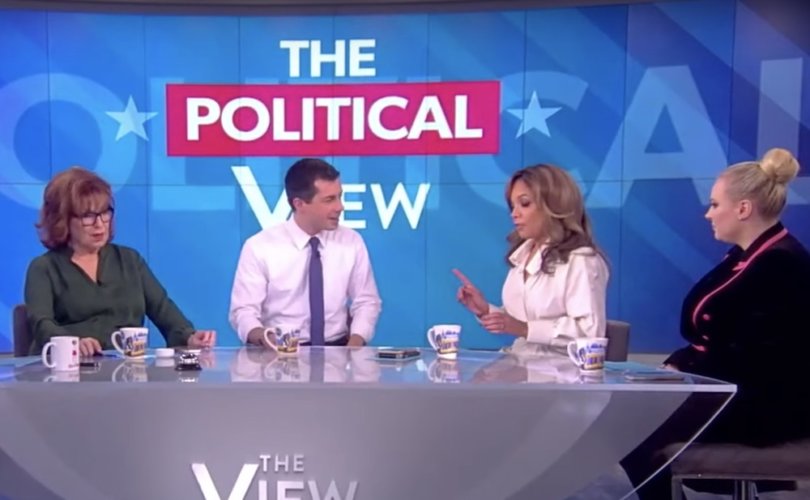 February 5, 2020 (LifeSiteNews) – Former South Bend, Indiana mayor and Democrat presidential candidate Pete Buttigieg stood by his claim that the Bible can be interpreted to allow abortion Thursday, while refusing yet again to draw the line at late-term abortion or condemn infanticide.

Buttigieg appeared on the left-wing talk show The View, where lone Republican host Meghan McCain pressed him on his September claim that Christians can support abortion because “there’s a lot of parts of the Bible that talk about how life begins with breath.” Pro-lifers responded at the time that Buttigieg was twisting Genesis 2:7’s account of God creating Adam – “Then the Lord God formed a man from the dust of the ground and breathed into his nostrils the breath of life, and the man became a living being” – while ignoring long-settled biological criteria that establishes a living human being is created upon fertilization.

“Well, I’m just pointing to the fact that different people will interpret their own moral lights, and for that matter, interpret Scripture differently,” Buttigieg told McCain. “But we live in a country where it is extremely important that no one person have to be subjected to some other person’s interpretation of their own religion.”

McCain followed up by bringing up partial-birth abortion, because “people, even Democrats – and there are a lot of pro-life Democrats in the country – want to know exactly where your line is, because you’ll be the president if you win.”

“Right, but my point is that it shouldn’t be up to a government official to draw the line,” Buttigieg responded. “It should be up to the woman who is confronted with the choice.”

“So if a woman wanted to — I don’t know — invoke infanticide after a baby was born, you’d be comfortable with that?” McCain followed up. Buttigieg responded by asking, “does anybody seriously think that’s what these cases are about?”

He then claimed any “late-term situation” is “by definition” one in which “the woman was expecting to carry the pregnancy to term. Then she gets the most, perhaps, devastating news of her life.”

“I don’t know what to tell them, morally, about what they should do,” he declared. “I just know that I trust her and her decision, medically or morally, isn’t going to be any better because the government is commanding her to do it in a certain way.”

His talking points did not impress pro-life observers:

I don’t know what to tell them, morally, about what they should do.“—@MeghanMcCain just asked you about INFANTICIDE, @PeteButtigieg… this should be an easy question to answer pic.twitter.com/hxuAmozCiB

No, @PeteButtigieg did give a stance

He said as long as a mother wants to abort a baby, at any age, she should be able to

Even if that means partially delivering a full-grown, 7 lb infant, who can recognize her mother’s voice, & then stabbing her neck & suctioning out her brain https://t.co/eXDtNWrg9y

Nothing is more vile than watching someone try to use Christianity to defend dismembering late-term children in the womb. @PeteButtigieg is doing just that. https://t.co/6EXqmRddpE

“The gov shouldn’t intervene if you want to rape someone”

Is the same as saying,

Don't let Pete Buttigieg tell you he's any less radical than the rest of the Dems running for president.

Protecting babies late in pregnancy and outside the womb from being killed shouldn't be a debate.

His answer to @MeghanMcCain's partial-birth abortion question is repulsive. https://t.co/GiR3TYu06r

Buttigieg also claims that late abortions are done only after “devastating news.”

Journal of pro-abortion Guttmacher Institute: “data suggests that most women seeking later terminations are not doing so for reasons of fetal anomaly or life endangerment.” https://t.co/bMFBSp5O2h https://t.co/UFdl3A35QJ

This is far from the first sign that Buttigieg favors effectively unlimited abortion. He previously tried to dismiss late-term abortions as “hypothetical,” refusing to accept any cutoff line for abortion beyond declaring, “I trust women to draw the line when it’s their own bodies.”

His pro-abortion platform also includes appointing pro-abortion judges to the Supreme Court and making the abortion drug RU-486 available over the counter. As mayor of South Bend, he vetoed Women’s Care Center’s re-zoning application to build a pro-life pregnancy center near the site of a proposed abortion center, and he has largely dodged questions about the discovery of thousands of babies’ corpses on the property of a deceased area abortionist.