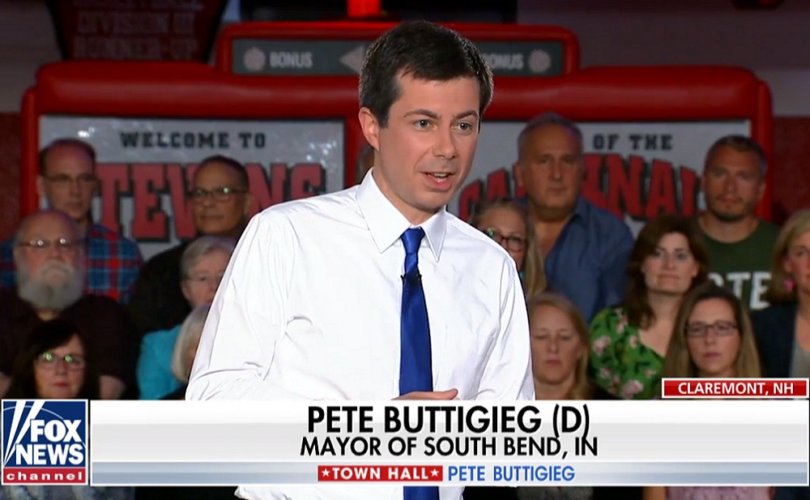 September 9, 2019 (LifeSiteNews) – Christians are pushing back against 2020 Democrat presidential candidate Pete Buttigieg for his claim that the Bible suggests human life does not begin until breath, including one critic that hits especially close to home: an evangelical pastor who is also the brother of Buttigieg’s “husband.”

On Friday, Buttigieg, who is the mayor of South Bend, Indiana, appeared on the Breakfast Club radio program for an interview with host Lenard “Charlamagne tha God” McKelvey, where he tried to make the case that President Donald Trump and the Republican Party are the ones who actually fall short of Christian teaching due to their positions on economics and healthcare, but “hold everybody in line with this one kind of piece of doctrine about abortion.”

“Then again, you know, there’s a lot of parts of the Bible that talk about how life begins with breath,” he countered. “And so even that is something that we can interpret differently.”

Pro-lifers assailed Buttigieg’s claim for twisting Scripture and ignoring science to justify abortion, particularly the idea that Genesis 2:7’s account of God creating Adam – “Then the Lord God formed a man(a) from the dust of the ground and breathed into his nostrils the breath of life, and the man became a living being” – is representative of how every subsequent human being came into existence (long-settled biological criteria establishes that a living human being is created upon fertilization).

1) Genesis is a theological text about creation, not a biology textbook 2) fetuses do “breathe” or receive oxygen through the umbilical cord 3) It can take 10-15 seconds for a baby to breathe after birth. Would that justify infanticide, Mr. Mayor? https://t.co/sW4ynHgxwQ

Among the critics was Rhyan Glezman, a Michigan pastor who is also the brother of Buttigieg’s “husband” Chasten.

“I feel a sense of responsibility and stewardship of my faith to stand up and say something, to say, 'No, that's not true,'” Glezman told the Washington Examiner. “God places a very high value on all human life. Everyone is created fearfully and wonderfully in the image of God with intrinsic value. That doesn't start at the first breath, it starts when we enter our mother's womb.”

“If we're going to say we're for all people and we love all people, but we don't value human life in the womb, that's being a hypocrite,” Glezman continued on Buttigieg’s “outrageous” use of Scripture. “You're hypocritical if you don't stand up for all life. So that's why I'm speaking out.”

Glezman went so far as to call Buttigieg a “modern-day pharisee,” who has “manipulated” and “weaponized” Scripture in the name of politics, and is “making up their own rules and regulations and, basically, if we don't celebrate and endorse their interpretation of Scripture, our religion is fallible.”

“This isn't a little issue, especially when we're talking about life,” he declared. “This is not just a political conversation. We're talking about human life. These are human beings.” Glezman added that he considered the entire 2020 Democrat presidential field “very anti-life” and “very anti-God.”

The Bible repeatedly condemns “murder” and “shed(ding) innocent blood” as “detestable to” the Lord, because “in the image of God has God made mankind.”

Glezman added that he loves both Pete and Chasten, but hopes the South Bend mayor will “repent from teaching these false claims of Christianity; that he would just have an absolute encounter with God. … Anyone who makes those claims, anyone who's going to weaponize the (Bible) in that way, I would say to anyone that you need to repent. This is leading people astray and it's very, very dangerous.”

Glezman has previously spoken out about the “very broken” relations within his family, particularly since he became a Christian and Buttigieg became a national figure, and accused the mayor’s presidential campaign of misrepresenting his family as having kicked Chasten out of the house and into poverty after coming out as homosexual.