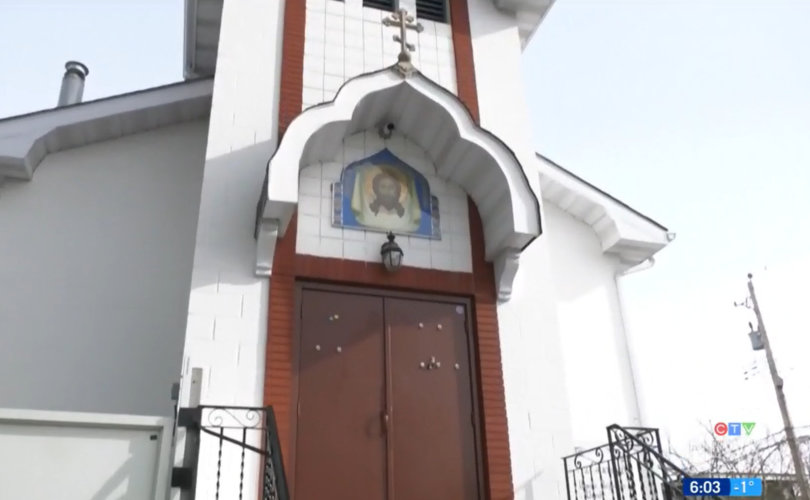 CALGARY, Alberta (LifeSiteNews) — A Russian Orthodox church in Calgary, Alberta, has been vandalized with red paint in what could be a vindictive act over Russia’s war against Ukraine.

CCTV captured the moment a man climbed over the fence to get onto church grounds, and after unsuccessfully attempting to open the church’s locked front door, dumped red paint on it and on the steps in front.

Fr. Dmitry Grygoryev, the parish priest of the vandalized church, told CTV News he believes it was done by someone expressing anger over the Russian invasion of Ukraine.

“I feel very sorry for this guy,” said Grygoryev. “I kind of understand his motivation. He probably feels pain of all the situation, the political situation, that is happening in Ukraine right now and was probably just trying to express his emotions.”

“But, again, church is outside of politics,” he added.

The priest told CTV News that about 30% of the members at All-Saints church are Ukrainian and that he himself was “born and raised in Ukraine before going to school in Russia.”

Grygoryev said everyone at the parish was “praying for the peace and unity [between] the Ukrainian and Russian people.”

He explained that his parishioners are all very concerned about the current situation between the two countries.

“Pretty much everyone has either relatives or friends in Ukraine and we feel worried,” he said, adding that the invasion of Ukraine by Russia took everyone at the church by surprise.

“Everyone felt shocked,” he said. “Nobody expected it was going to happen like that. All of us, to the very last moment, were [hoping for] a diplomatic [solution] that would bring [about] some resolution.”

Since the incident, most of the red paint has been washed from the church door, though some stains remain on the concrete steps.

Grygoryev said the footage showing the man dumping the red paint has been sent to the Calgary Police Service’s hate crimes unit.