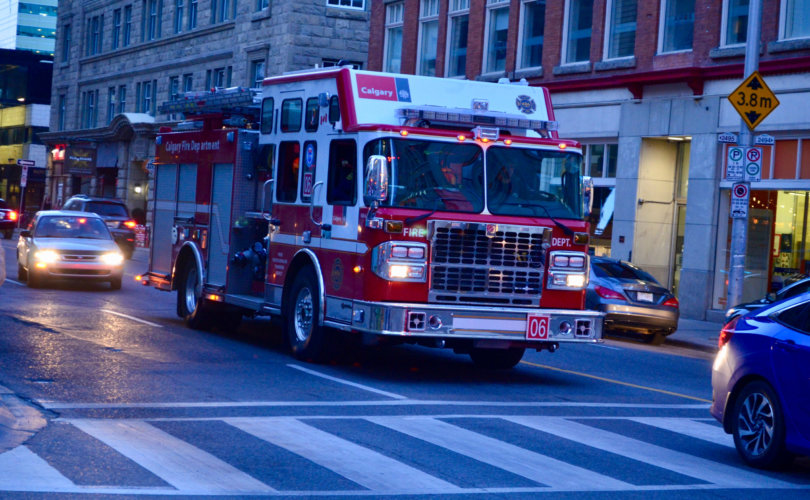 CALGARY, Alberta (LifeSiteNews) – A group of 19 firefighters forced off the job for choosing not to get the experimental COVID vaccines are suing the city and the Calgary Fire Department (CFD) for a combined $38 million in damages, saying the city’s injection mandate “violated” their basic “human rights.”

“There’s something tyrannical about these mandates. We can’t identity everybody behind it, but what we can do is hold people accountable, like the fire chief, politicians, city managers. Those people are responsible for their actions,” Stephen Dabbagh, the leader of the lawsuit, told LifeSiteNews.

Dabbagh, a devout Catholic father of four, worked for 20 years as a firefighter for the CFD, most recently as a fire captain. He resigned under duress on December 8, 2021, over the department’s COVID vaccine policy.

He told LifeSiteNews that the lawsuit came about because it was time to stand up to the “political and ideology tyranny of these mandates.”

The City of Calgary and the CFD were served with the Statement of Claim on July 7 in the Court of Queens Bench of Alberta. The firefighters are seeking $2 million in damages for mental duress, violations of their Charter rights, violations under the Criminal Code, and “Punitive and exemplary damages.”

“By forcing its loyal employees to take experimental injections as a requisite to employment, the City has breached its legal duty to take reasonable steps to prevent bodily harm to its Employees contrary to section 217.1 of the Criminal Code of Canada,” the lawsuit reads.

“The Plaintiffs have suffered measurable damages, including mental distress, anxiety, and, in particular, injury to dignity and self-respect. The Plaintiffs are therefore entitled to significant damages due to the manner in which the City suspended their employment, including a claim for punitive aggravated damages arising from flagrant human rights and Charter violations.”

The City of Calgary in the fall of 2021 mandated jabs for all city employees, with the mandate for firefighters coming into force in early October. All city employees had to show proof of vaccination status, submit to invasive and frequent COVID tests, provide a reason for an exemption, or risk being placed on unpaid leave.

While the COVID vaccine mandate was “suspended” by the city in March 2022, Dabbagh told LifeSiteNews that the lawsuit is needed to prevent these types of dictates from ever coming back.

“The law says we have these rights (to refuse the jabs via Canada’s Charter) even if they are not being upheld by the courts,” Dabbagh said.

“For me, it is using every avenue to fight against the political and ideology tyranny of these mandates. … These medications, or whatever they are called, are not safe and did not work.”

Most of the firefighters named in the lawsuit are long-serving employees. These include those who resigned under duress or went on leave due the mandates, a 25-year CFD employee who served as an acting chief for three years and retired under duress, and one who was fired for showing support for the Freedom Convoy.

A few of the firefighters are now working again for the CFD but under duress.

The firefighters are being represented by Alberta lawyer Leighton Grey, who is also behind other high-profile lawsuits in Canada concerning employee vaccine mandates, in particular those from WestJet employees.

Grey told LifeSiteNews regarding the lawsuit that all of the firefighters have had “their human rights impacted, even people who were on leave at the time have still suffered human rights violations.”

“The city of Calgary through its vaccine mandate has violated the human rights of the workers by discriminating against them on the basis of religion, and arbitrary discrimination against one’s medical choice,” Grey said.

“We are seeking a declaration from the court that this (jab mandates) violates their human rights as per the charter.  We are asking the court to recognize that these vaccine mandates violate, rights.”

Grey noted that the lawsuit seeks mainly two things from the court. They are “a declaration that these vaccine mandates violate human rights, so we are talking about freedom of religion, rights as a human person, informed consent,” and monetary compensation.

He was also involved in other high-profile Canadian COVID litigation for the past few years, helping on the cases of Alberta Pastors James Coates and Tim Stephens, who were jailed for breaking virus rules.

He told LifeSiteNews that all these lawsuits have “one thing in common” in that they are “all based upon discrimination against Canadian workers, and the target seems to be against skilled Canadian workers.”

“It’s against the glue of people that are holding society together,” he said.

Grey told LifeSiteNews that the “attack on the Canadian worker, I think, is really clear now, is part of a global agenda.”

“When you look at these vaccine mandates, they seem to only attack the Canadian working class. In most cases, these are unionized workers, and they are coming to me as the union is not doing their job,” Grey said.

Grey noted that Canadians are “living through a period of Canada of intense corruption, and the reason why is we have a very corrupt leader (Prime Minister).”

“We know from the Pfizer dump, and anecdotal evidence, that these vaccines have dangers and can cause bodily harm.”

Firefighter: If courts don’t uphold the Charter, it says a lot about ‘where we stand as a society’

Dabbagh told LifeSiteNews that the lawsuit seemed like the right thing to do “to fight back” and see “whether or not the courts will uphold the law or not.”

“If they don’t, we kind of know where we stand as a society,” he said.

Dabbagh noted how Canada’s Charter of Rights and Freedoms is “supposed to be the highest law of the land.”

“If it’s not going to be upheld in the courts, then what does that say about where we live,” Dabbagh said.

Dabbagh and a group of around 100 other Calgary first responders last September drew the ire of the city after holding a silent protest against COVID jab mandates in front of city hall.

He noted that the first protest served as the catalyst for fellow and former co-workers to fight against the city’s COVID vaccine policy.

At the time, Calgary Fire Chief Steve Dongworth called those employees protesting COVID jab mandates a small group of people “in the process of advancing their agenda.”

Alberta Premier Jason Kenney called protesters at hospitals and other areas an “outrageous small minority” and threatened to bring the full extent of the law on them should they block roadways.

Kenney will soon be replaced as premier and leader of the United Conservative Party of Canada (UCP) after announcing he will step down due to lack of support, no doubt due to his going along with COVID mandates.

Danielle Smith, who is running in the UCP leadership, has promised if she becomes Premier that there will never again be lockdowns or jab mandates in Alberta, and she would not “enforce” any federal mandates imposed on the province.

Virtually all Canadian provinces had in place COVID mandates for healthcare workers. While these mandates have been dropped except for British Columbia, many provinces are desperately now looking to re-hire the un-jabbed workers.

Under Kenney, Alberta also mandated a COVID vaccine passport system for a time, despite the fact the leader promised he would never bring such a program to light.

Lawyer: The new concept of ‘an involuntary unpaid absence’ is nothing more than ‘dismissal’

Grey noted to LifeSiteNews that as the firefighters’ union, Firefighters Association IAFF 255, did not stand up for their rights, it left them with no choice but to fight back with a lawsuit geared around Charter rights.

“Never have we had an involuntary unpaid absence … this amounts to constructive dismissal,” Grey noted.

“The Calgary Firefighters cannot sue their employer directory due to union collective bargaining agreement,” he said. “Their only recourse is to grieve through the union.”

As the union did nothing to help with the grievance over the vaccine mandates due to a collective bargaining agreement, the firefighters had to sue the CFD and city for “violations of human rights,” Grey noted.

“Time will tell. We are in early days, this is uncharted territory,” Grey said.

“I’m very proud these guys and honored to help them.”

Grey pointed out that “corruption” within the union comes into play “in every single case” due to the unions having “received an independent legal assessment that their COVID jab mandates are fine, so they cannot be sued.”

The COVID-19 injections approved for emergency use in Canada, and which are still in an experimental trial phase, including the Pfizer jab for ages 12 and up, all have connections to cells derived from aborted babies.