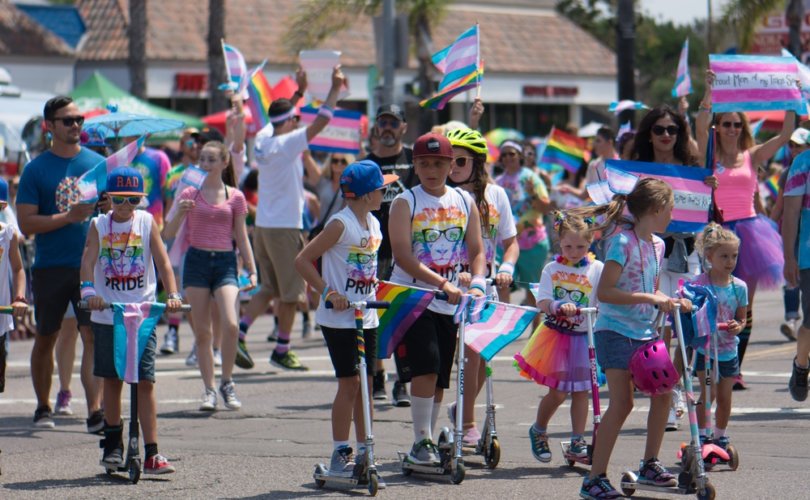 SACRAMENTO (LifeSiteNews) — California lawmakers are seeking to turn the state into a “sanctuary” for radical transgenderism with a new law encouraging parents to bring their kids to the Golden State to subject them to mutilating “sex-change” surgeries and drugs, National Review reported.

The move comes after California Democrat Gov. Gavin Newsom previously promised to make California a “sanctuary” for abortion, in defiance of pro-life states around the country which have advanced legislation to protect the unborn.

National Review reported that S.B. 107, which was brought before the state Judiciary Committee June 8, would amend existing law to “treat refusals to allow puberty blocking, transgender surgeries, or other forms of ‘gender affirming care’” the same way the law currently treats cases of “child abuse and abandonment.”

“Usually, if a parent refuses to return a child to another state after visitation, California courts won’t take jurisdiction,” National Review reported. “But a specific exemption to this general rule is being fashioned when ‘gender affirming care’ is at issue”.

California is set to become a transgender sanctuary state, with a law that encourages children to be brought there to escape court rulings and laws of other jurisdictions. https://t.co/UNpLmV9OjM

Families engaged in custody disputes centered around transgender “care” for their kids could find California courts moving in to ensure the child receives destructive hormone and surgical interventions, even against the wishes of the parent opposed to transgender ideology.

RELATED: Democrat obsession with gender treatment is damaging our children

Out-of-state laws that protect children from the irreversible effects of transgender procedures would also “not be enforced or applied” in California, according to the bill.

Moreover, California would refuse to perform “arrests or extraditions” of individuals “pursuant to a criminal action related to the law of another state that criminalizes allowing a person to receive or provide gender-affirming health care,” if those actions would not be considered illegal in the Golden State.

S.B. 107 would put California in direct opposition to Republican-led states like Texas, Idaho, and Alabama, which have moved to protect children from destructive and irreversible transgender surgeries and hormonal interventions.

The California bill was introduced by San Francisco Democrat Sen. Scott Wiener, an openly homosexual lawmaker who previously introduced a bill (S.B. 145) allowing judges to exempt individuals who engage in homosexual sex acts with minors from the state sex offender registry if they’re no more than 10 years older than a minor aged 14 and up. The bill has since been signed into law.

Sen. Wiener, who also recently suggested that “drag queen” shows should be made mandatory for California schoolchildren, had tweeted out a summary of S.B. 107 in a lengthy Twitter thread in March.

On Thursday, he announced that he had co-presented the bill with Assemblymember Lori Wilson, characterizing the legislation as a “state of refuge bill” to “protect” “trans kids.”

Today I co-presented our trans state of refuge bill (SB 107) with my colleague Assemblymember Lori Wilson — the only member of the Legislature with a trans child.

SB 107 ensures that if families with trans kids come here to flee states that criminalize them, we can protect them. pic.twitter.com/4Y2MxFFawI

National Review noted that if S.B. 107 is passed into law, “California will become a transgender sanctuary state, with a law that encourages transgender children to be brought to California to escape court rulings and laws of other jurisdictions when they go against transgender ideology.”

While California’s legislative proposal would formalize a statewide adoption of transgender ideology in opposition to states and parents who hold a traditional view of human sexuality, its provisions and intended effects are not new.

Even before the introduction of the senate bill, parents who object to the “transitioning” of their children have been faced with a hostile court system which sides with the spouse who adheres to transgender ideology.

In 2019, 56-year-old Apple software engineer Ted Hudacko of Richmond, California, fought and lost a bitter legal battle after his wife announced that she wanted a divorce and that their 17-year-old son wanted to become a girl.

LifeSiteNews previously reported that when the matter went to court, the judge (whose own child had “transitioned” to look more like the opposite gender the previous year) sided with the mother, denying Hudacko custody rights over his son.

Though Hudacko has only been permitted to see his son during supervised visits, he has been forced to pay his medical bills as he undergoes medical “transitioning” to look more like a girl.

​​“There’s a lot of unknowns … it’s the permanent changes and lifelong medicalization,” Hudacko said. “Based on the experts I have consulted, he has already been pretty damaged.”

— Article continues below Petition —
Stand with the MLB players who refuse to wear Pride colors
Show Petition Text
12584 have signed the petition.
Let's get to 15000!
Thank you for signing this petition!
Add your signature:
Show Petition Text

READ: Father’s ‘torment’ over ‘trans’ son he hasn’t seen in two years not unlike what other families are going through

“There are a lots of families going through this,” Hudacko added. “It is a special form of torment for them all.”

Meanwhile, the issue isn’t isolated to deep-blue states like California.

Last year, a Texas judge granted full custody of eight-year-old James Younger to his mother, who refers to James as “Luna” and wants to subject him to “gender transitioning” to identify as a girl.

Likewise in 2018, parents in Ohio lost custody of their teenage daughter because a judge ruled that she should be allowed to receive hormones to identify as a boy.