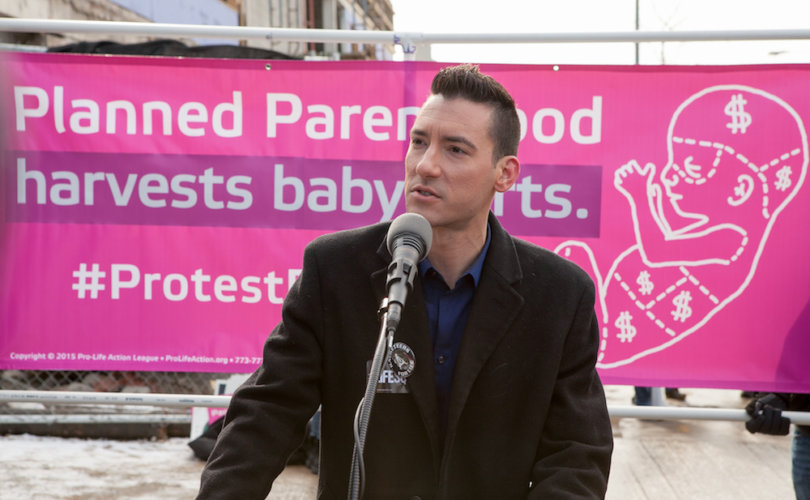 The “office of Kamala Harris, who was elected with tens of thousands of dollars from taxpayer-funded Planned Parenthood, seized all video footage showing Planned Parenthood's criminal trade in aborted baby parts, in addition to my personal information,” Daleiden said in an official statement. “Ironically, while seizing my First Amendment work product, they ignored documents showing the illicit scheme between StemExpress and Planned Parenthood.”

Harris, who is running for the U.S. Senate as a Democrat, promised last July that she would look into allegations that Daleiden and investigators at the Center for Medical Progress had broken local laws by using false identification to gain access to the highest levels of the abortion industry and covertly record his conversations.

Daleiden posed as “Robert Sarkis,” while associate Sandra Merritt posed as his assistant at BioMax, a biomedical group interested in purchasing the body parts of aborted babies from Planned Parenthood and its allies coast-to-coast. Both purportedly had false identification and set up an incorporation for the business in California.

Beginning last July, CMP released a series of videos showing Planned Parenthood officials discussing the harvesting and sale of such parts, as well as apparently discussing how they change the abortion procedure to procure intact babies.

That touched off a national backlash against Planned Parenthood and a series of state and federal investigations into its possible illegal profit from the sale of human organs, some of them still ongoing.

Daleiden's allies say that yesterday's raid is the latest in a series of moves intended to legally harass and punish the young man for blowing the lid on the abortion industry's dirty secrets.

A legal expert and Daleiden ally says the latest raid is excessive. “To storm into a private citizen’s home with a search warrant is outrageously out of proportion for the type of crime alleged. It’s a discredit to law enforcement, an oppressive abuse of government power,” said Matt Heffron a former federal prosecutor in Phoenix, and now a legal adviser to Daleiden.

But his opponents said Daleiden brought it on himself.

“David Daleiden engaged in an elaborate criminal conspiracy to deceive the public and ban abortion in this country, and now he's paying the price,” said Planned Parenthood spokeswoman Erica Sackin.

National Abortion Federation (NAF) President Vicki Saporta echoed that sentiment. “As the evidence has shown in our case, he engaged in a long-running criminal conspiracy. His actions are not without consequences,” she said.

Saporta's group has not always been so keen on turning in criminals. The NAF inspected Dr. Kermit Gosnell's West Philadelphia “House of Horrors” in December 2009. Although the group turned down the mass murderer's request for membership, it failed to report the conditions inside the filth-strewn facility to the authorities.

Daleiden took the California raid in stride, saying Kamala Harris has engaged in a pattern of protecting the abortion industry.

“This is no surprise,” Daleiden said. “Planned Parenthood's bought-and-paid-for AG has steadfastly refused to enforce the law against the baby body parts traffickers in our state – or even investigate them – while at the same time doing their bidding to harass and intimidate citizen journalists.”

“We will pursue all remedies to vindicate our First Amendment rights,” he vowed.

This is one of several legal actions hanging over CMP's head since it went forward with undercover footage that shocked the nation's conscience and reportedly shook Planned Parenthood CEO Cecile Richards.

A Houston grand jury, empaneled to hear charges against a local Planned Parenthood affiliate, instead indicted Daleiden and Merritt for using a false ID and attempting to purchase human organs – charges for which they could face 20 years in prison.

The NAF sued Daleiden and CMP in California to prevent the release of a series of undercover videos of the organization's annual meeting. Much of that footage has since leaked online.

Planned Parenthood has filed a civil suit in California, charging CMP with violating the RICO statute.

And U.S. Attorney General Loretta Lynch has promised to investigate Daleiden and CMP at the federal level.

Correction: The raid happened Tuesday evening, not Wednesday, as originally stated in the lead paragraph.

WATCH: David Daleiden turns himself in