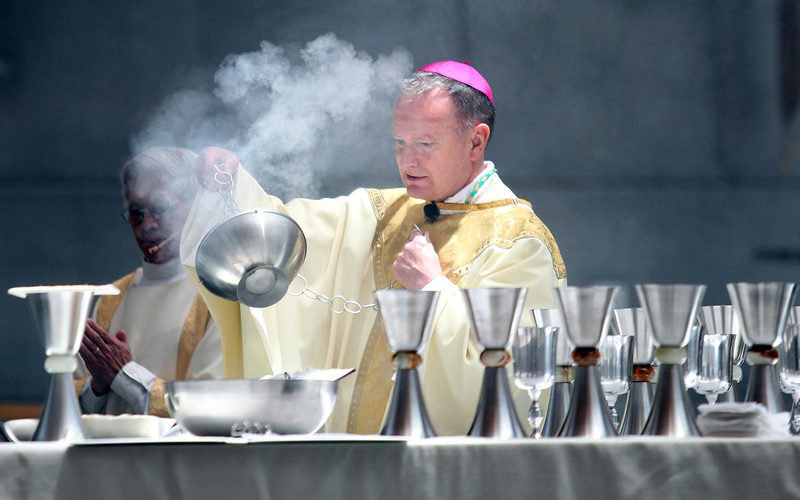 OAKLAND, California (LifeSiteNews) – Bishop Michael Barber, S.J., of Oakland has criticized Cardinal-designate Robert McElroy of San Diego for thinking that abortion is “not wrong enough” to take action on, including by correcting so-called Catholic politicians supporting the practice.

The accusation comes in the wake of Pope Francis naming McElroy a cardinal and before a special assembly of the United States Conference of Catholic Bishops (USCCB).

Barber made his comments to the Wall Street Journal while discussing San Francisco Archbishop Salvatore Cordileone’s decision to bar Speaker of the House Nancy Pelosi from Holy Communion.

The Catholic Church teaches that the Eucharist is the Body, Blood, Soul, and Divinity of Jesus Christ.

According to Barber, McElroy thinks that abortion is “not wrong enough that you need say or do anything about it or interact with the politicians who are publicly promoting it.” Barber also noted that McElroy has discussed other political issues publicly, such as immigration. McElroy’s spokesman responded to Barber’s comments, maintaining that he does discuss abortion.

Barber further noted that Cordileone was “prophetic,” and said that the differences between the two bishops points to “two forces in the Church right now,” with Cordileone representing a party more closely aligned with the approaches of St. John Paul II and Pope Emeritus Benedict XVI, and McElroy representing Pope Francis.

— Article continues below Petition —
Pope Francis: Don't make Bishop McElroy a cardinal - he knew about McCarrick
Show Petition Text
12643 have signed the petition.
Let's get to 15000!
Thank you for signing this petition!
Add your signature:
Show Petition Text

Barber was quick to defend Cordileone’s decision to bar Pelosi from Communion, tweeting the day Cordileone released the document “I support @ArchCardileone in the heroic and compassionate stance he took today in the protection and defense of human life.”

+Michael Barber: “I support @ArchCardileone in the heroic and compassionate stance he took today in the protection and defense of human life. As @Pontifex said, ‘Every child who, rather than being born, is condemned unjustly to being aborted, bears the face of Jesus Christ.'”

Barber has also defended the Church’s teaching on homosexuality. In April 2014, Barber removed an openly homosexual priest from a parish on the campus of UC Berkley. He also spoke out against a proposed California law that would have penalized priests for breaking the seal of Confession, an offense punished by automatic excommunication in the Catholic Church.

In contrast to Barber, McElroy has publicly celebrated “LGBT” Masses and voiced support for dissident priest Fr. James Martin, S.J., a priest known for supporting changes to Catholic teachings on homosexuality, accusing critics of Martin of “homophobia.” McElroy has also downplayed abortion, criticizing USCCB voter guides in 2015 and 2019, saying that making abortion a “preeminent priority” is “at least discordant with the Pope’s teaching if not inconsistent” and is a “grave disservice to our people if we’re trying to communicate to them what the Magisterium teaches.”

McElroy has also downplayed the gravity of contraception, saying in a February 2020 talk given at the University of San Diego that “it is a far greater moral evil for our country to abandon the Paris Climate Accord than to provide contraceptives in federal health centers.”

Pope Francis announced earlier this month that he will elevate McElroy to the College of Cardinals in the next consistory, set to take place in August.

The Catholic Church teaches that both abortion and homosexuality are gravely evil. According to the Catechism of the Catholic Church (CCC), “Since the first century the Church has affirmed the moral evil of every procured abortion. This teaching has not changed and remains unchangeable. Direct abortion, that is to say, abortion willed either as an end or a means, is gravely contrary to the moral law (CCC 2271).”

The Catechism further states, “Basing itself on Sacred Scripture, which presents homosexual acts as acts of grave depravity, tradition has always declared that ‘homosexual acts are intrinsically disordered.’ They are contrary to the natural law (CCC 2357).”

Barber’s remarks come just before a June meeting of the USCCB held every three years to boost spiritual formation and cooperation between bishops. This year, the talks will be given by Archbishop Anthony Fisher of Sydney, Australia.