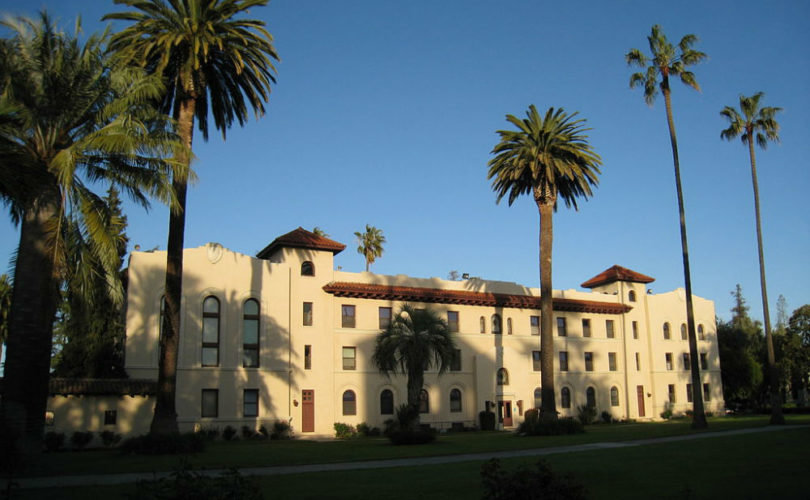 Ned Dolejsi, executive director of the California Catholic Conference, told The Cardinal Newman Society that California’s bishops are “surprised and distressed” by the California Department of Managed Healthcare’s (DMHC) decision “to declare all legal abortions a ‘basic health service’ and to require all health insurance plans to cover legal abortions,” and a response is being planned.

DMHC’s new policy—targeting Loyola Marymount University and Santa Clara University, which recently dropped elective abortion coverage from their employee health plans—violates the federal Weldon Amendment and risks the loss of federal funding to California, because it discriminates against insurance companies that fail to cover elective abortion. The Cardinal Newman Society, represented by the Alliance Defending Freedom and the Life Legal Defense Foundation, recently warned the Department and California insurers of the violation of federal law.

The Newman Society also recently discovered that the health plans for California’s own state employees cover only “medically necessary” abortions.

“We find [the ruling] frustrating and extremely disappointing,” Dolejsi explained in an interview. “It continues to encourage the idea that abortion is a good and positive option that should be promoted in the state of California, and we disagree with that fact.”

The recent ruling is a reflection of the fact that in California, abortion is viewed as a good and necessary option to be included in all insurance plans. We fundamentally disagree that the taking of human life is healthcare. Various committees of the CCC are examining the DMHC’s decision, its implications, and a range of possible responses.

The Cardinal Newman Society asked Dolejsi why Jesuit universities and other large Catholic institutions would not simply self-insure or participate in Catholic plans that are under federal regulation, thereby escaping California’s insurance regulations. Dolejsi confirmed that for Catholic organizations and institutions that want to maintain health plans in compliance with their faith, Catholic self-insured plans like the RETA Trust are potential options chosen by many Catholic institutions in California.

“All Catholic institutions can submit an application to purchase health insurance through RETA,” he explained.

Specifically with regard to Loyola Marymount University and Santa Clara University, Dolejsi said that he “can’t speak for the universities, but we are certainly very supportive and pleased that the administration and governance of the universities wanted to ensure ​that their plans didn't cover abortion.”

What is particularly unsettling about the DMHC’s decision is that it was done at the behest of organizations such as the ACLU and Planned Parenthood. These organizations are politically powerful and are increasingly using the government to coerce others, who are not as politically powerful, to adopt, under penalty of law, their worldview. This runs contrary to our nation’s longstanding commitment to pluralism and tolerance.

Dolejsi observed that the most troubling aspect is how aggressively Planned Parenthood has pursued their “business plan,” which is “to reposition themselves as providers of primary healthcare for women and to take advantage of the changes that are going on within the healthcare provider business” in order to “remarket” themselves.

“Of course, they will have their emphasis on abortion as an individual choice and solution,” Dolejsi warned.

Additionally, Planned Parenthood has succeeded in exempting their centers from the regulation of the Surgical Center in California. Dolejsi noted that such exemption “is certainly not something that most women would view as being in their best interests in terms of health and safety.”

Planned Parenthood was also successful in increasing California state funding by 40 percent for abortions, according to Dolejsi. These state privileges “betray a particular prejudice in favor of abortion for those who are poor and struggling, as opposed to providing real healthcare for them,” he said.