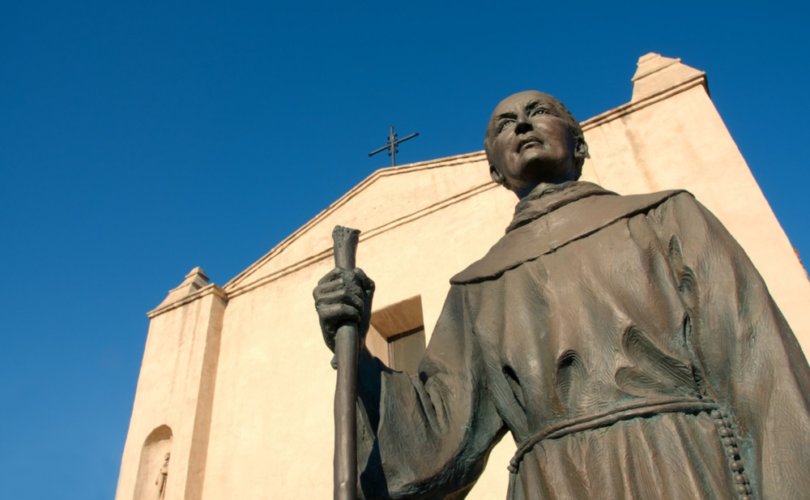 VENTURA, California, July 17, 2020 (LifeSiteNews) — The Ventura City Council has voted to remove a statue of St. Junípero Serra from its location outside its City Hall. Statues of the 18th-century Catholic missionary have become a target for vandalism and destruction across California in recent weeks.

Earlier this week, the council unanimously voted to remove both a bronze statue of Serra located on public property in front of City Hall and a wooden replica currently kept inside the City Hall buildings. The bronze statue will be relocated to the Mission San Buenaventura, one of nine mission sites founded by Serra, while the eventual destination of the wooden statue is yet to be determined.

While protesters have pulled down and desecrated statues in San Francisco, Los Angeles, and Sacramento in recent weeks, the statue outside Ventura City Hall has so far been preserved. Last month, a group of courageous young Catholics physically defended the statue when a mob had sought to tear it down.

Voices in favor of the destruction of Serra statues have accused the Spanish missionary of having committed numerous crimes, including genocide and the enslavement and torture of indigenous peoples.

But in a statement issued last month, archbishop of San Francisco Salvatore Cordileone  insisted that Serra was a champion and protector of indigenous people.

Cordileone subsequently led prayers of reparation and exorcism at the base of the profaned Serra statue in Golden Gate Park, San Francisco.

The Embassy of Spain in the U.S. also stressed that Serra had made “great efforts in support of indigenous communities” in a statement issued last month expressing their deep regret for the destruction of Serra’s statue in San Francisco.

When canonizing Serra in 2015, Pope Francis said the missionary had “sought to defend the dignity of the native community, to protect it from those who had mistreated and abused it.”

In his recent executive order calling for the building of a national park to honor American heroes, President Donald J. Trump specifically identified Serra as an individual included in the phrase “historically significant American,” for whom statues in the National Garden may be commissioned.