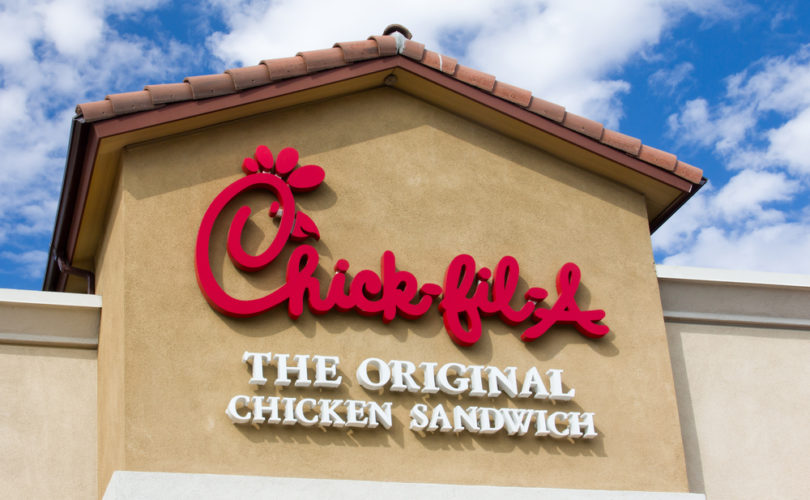 The San Jose City Council voted unanimously on April 9 to surround the popular chicken chain location at the publicly-funded airport with the multi-hued flags of the homosexual and transgender movements. The Chick-Fil-A location at the airport is currently under construction and scheduled for completion in May.

According to a report in San Francisco Business Times, the ploy was suggested by Santa Clara County supervisor Ken Yeager, a Democrat, “to counter the bigotry of Chick-fil-A and to let people know that even though there’s that restaurant there, the city is showing its support for the LGBTQ community.”

During the meeting, council member Devora Davis, also a Democrat, opposed surrounding the restaurant with the flags, arguing “if we have them next to Chick-fil-A, it might be confusing — people might think Chick-fil-A is supporting and go to that restaurant.”

She advised that the flags be flown at another location at the airport. Democrat council member Raul Peralez offered a provision for a vote that would allow contracts only to those companies open seven days a week. Chick-fil-A locations, in observance of the Sabbath, are always closed on Sundays.

The city council approved a contract in March 2018 that allows several eatery chains, including Chick-Fil-A, Shake Shack and Trader Vic’s, to fill in empty slots at the busy airport. According to a report by the San Jose Mercury News, council member Magdalena Carrasco claimed that the approval of Chick-Fil-A “slipped under everybody’s radar” when the package deal that included the other eateries was approved.

On April 9, council debated a two-year extension of the approval in light of objections by LGBTQ campaigners to Chick-Fil-A in the larger package deal, as councilwoman Magdalena Carrasco put it Tuesday. In a letter to the council, Bay Area Municipal Elections Committee (BAYMEC),- a consortium of six LGBTQ groups, wrote:

“To millions of visitors every year, Norman Y. Mineta International Airport is their front door to this city, and we want all of them to feel welcome. Chick-fil-A does not represent San Jose’s values. It is not worthy of being the company that visitors first see, and it does not make for a more inclusive environment.”

The group demanded that Chick-fil-A leave the airport as soon as possible and “be replaced with an organization that shares our values of inclusivity and diversity, and that welcomes all visitors to San Jose.”

In a statement, Yeager, a homosexual, released a statement stating that he was “saddened” when he saw the logo for Chick-fil-A at the airport.

“It sends a signal to visitors that San Jose supports businesses that actively work against equal rights for the LGBTQ community,” said Yeager, who is also executive director of the nonprofit BAYMEC Community Foundation.

Based in Atlanta, Chick-fil-A is owned by a Christian family. Through its foundation, Chick-fil-A has long funded pro-family and Christian organizations. For example, tax returns for 2017 revealed that it gave more than $1.8 million in total to Fellowship of Christian Athletes, the Paul Anderson Youth Home, and the Salvation Army.

In a statement to the Bay Area Reporter, the company stated that it is seeking to clarify misperceptions. It noted that the company’s “sole focus” is to sell sandwiches rather than being “a part of a national political conversation. We do not have a political or social agenda.”

It went on to say that among its 145,000 employees are people from various backgrounds, “including members of the LGBTQ community. We embrace all people, regardless of religion, race, gender, ethnicity, sexual orientation or gender identity.”