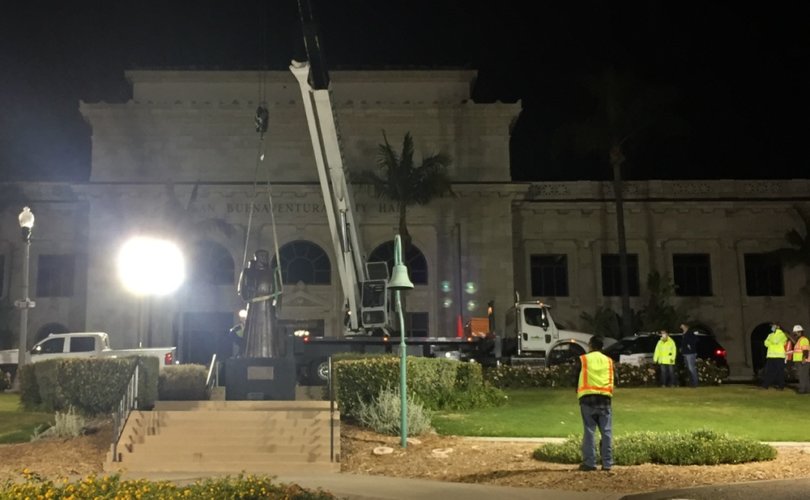 VENTURA, California, July 24, 2020 (LifeSiteNews) – Under the cover of darkness, the city of Ventura, California removed the statue of St. Junipero Serra from in front of city hall and deposited it in a storage facility. This took place on July 23 before dawn. The city first erected the monument to Father Serra, Ventura’s founder, in 1936.

Last week, the city council voted unanimously to remove both the bronze statue from in front of city hall and the identical wooden statue from inside the building, ceding to clamor that Father Serra was “Father genocide” who was a racist, and hence has no place in today’s Ventura.

This week, citizens filed a lawsuit challenging the validity of the city council’s vote. They also asked for a restraining order to prevent the city from removing the bronze statue, arguing that the city ran roughshod over the rules regulating the disposal of historic resources. The court denied the request for a restraining order, accepting the city’s argument that the statue had to be removed for its own safety. The city made no mention of the fact that it was also rushing to remove the wooden statue from its place indoors, where it was in no danger.

The city’s public works director, Phil Nelson, signed a declaration under penalty of perjury that the city believed the statue was in imminent danger of vandalism, which was why it had to be removed immediately. He said he personally was in charge of the statue’s removal. Phil Nelson is a Catholic deacon who serves at St. Thomas Aquinas Catholic Church in Ojai, California.

Due to the times posted on temporary “no parking” signs, supporters of the statue suspected the city would remove it in the dead of night. When the first supporters arrived at 3 AM on Thursday, the city workers had just begun erecting barricades and closing the street in front of City Hall. A half dozen supporters gathered next to the statue until police officers asked them to move outside the barricade while the city removed the protective fencing from around the statue.

When Skyline Crane Rentals arrived, the Serra supporters returned to the statue to ask the crane operators to have nothing to do with the dismantling. One Serra supporter told Skyline’s CEO, Bob Cullen, that his company’s participation in taking down statues would be bad for business. Cullen said that he was glad to be a part of it and that those who oppose the statue removals are in the minority and are not in charge anymore. He dismantled the statue himself. Deacon Phil Nelson was on site, supervising.

In the two hours it took to tear off the marble sides of the pedestal, unbolt the statue, lift it, wrap it in blankets, and belt it onto a flatbed truck, the pro-Serra group grew to about a dozen. A handful of anti-Serra activists also gathered, video-taping and burning incense.

The attacks on St. Junipero Serra began in early June, when agitators began asking the city for the statue’s removal and scheduled a “Tear Down Junipero Serra” event. In an apparent effort to protect the statue from destruction, Ventura Mayor Matt LaVere, San Buenaventura Mission pastor Fr. Tom Elewaut, and a Chumash representative published a letter saying they all agreed that “the time has come” to remove the statue from its prominent location.

Speakers at the “Tear Down Junipero Serra” event on June 20th tried to incite the crowd to physically attack the statue, but a small group of Catholics surrounding the statue thwarted the attempt.

The city then scheduled multiple “community discussions” to decide the future of the statue. Due to the pandemic lockdown, the discussions were virtual. At each meeting, despite the evidence documenting the historic status of the bronze statue, the committees voted that the statue was not historic. They based their decision on the fact that the original cement statue was recast in bronze in 1989, although at that time the city council called the new statue a “landmark renewed.” The city first formally recognized the statue as a historic landmark in 1974 and had repeatedly reaffirmed that designation up until the meetings to discuss its removal. Even the original letter from Mayor LaVere, Fr. Elewaut, and the Chumash representative refers to the statue as a “designated landmark.”

The city council used funds donated for the erection and preservation of the monument to pay for its removal.

Although the restraining order was denied, the lawsuit is ongoing and could result in a finding that the city council’s vote to remove the statue was illegal.

Separately, Ventura County is considering removing the image of Junipero Serra from its seal, but is awaiting a recommendation from the Diversity and Inclusion Task Force.

Serra supporters are organizing a rally to defend Serra and his part in California's history on August 15 at 2 PM in front of Ventura’s City Hall.

They are also encouraging emails to the county board of supervisors in defense of Serra. You may contact Supervisor Steve Bennett at [email protected].