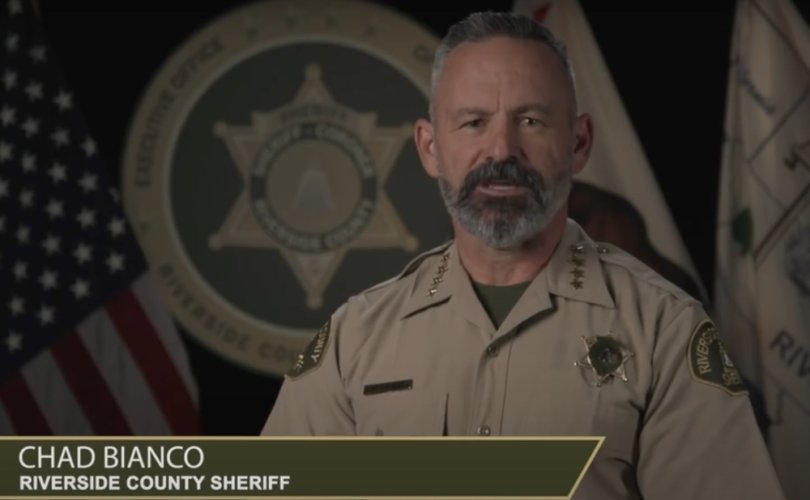 RIVERSIDE, California, December 15, 2020 (LifeSiteNews) – A county sheriff in California is standing up to state Governor Newsom’s stringent lockdown restrictions, saying that he will not be enforcing them, and labelling Newsom as a “bully.”

In a video message released December 4, Sheriff Chad Bianco referred to the “new regional approach” to supposedly prevent the spread of COVID-19. Bianco also noted how Newsom had threatened to withhold “federal and state funding from counties who did not enforce the orders.”

However, the sheriff points out the governor’s hypocrisy in making such a heavy threat, since he reminds viewers that “it wasn’t that long ago our same governor loudly and publicly argued how wrong it was for the President of the United States to withhold federal funding from states not complying with federal laws.”

Bianco also pointed to the hypocrisy of Newsom’s own actions as he enforced harsh restrictions on the majority of the state, highlighting the recent dinner which the governor had in violation of his own restrictions. Guests of that dinner even included the CEO and a top lobbyist of the California Medical Association (CMA), who had previously released a disturbing video promoting masks, and attacking anyone who refused to wear one.

The new California orders themselves state that everyone in the state is to “stay home or at their place of residence,” with exceptions only being made for “permitted work, local shopping or other permitted errands, or as otherwise authorized.” Under the rules of the Regional Stay Home order, a region enters into the lockdown at midnight “the day after a region has been announced to have less than 15% ICU availability,” and will remain in effect “for at least 3 weeks.”

Amongst the various restrictions, shopping centers and retail outlets are permitted to open at 20% or 35% of total capacity, yet places of worship are allowed “outdoor activities only.”

“These closures and stay at home order are flat out ridiculous. The metrics used for closures are unbelievably faulty and are not representative of true numbers and are disastrous for Riverside county,” Bianco declared.

Instead of Newsom’s lockdown legislation, Bianco called for “a little common sense” particularly since he noted that “the medical field is so split about this virus.” Whilst hospitals were treating patients with COVID-19, the sheriff mentioned that there were also the “normal seasonal increases” and so for Newsom to threaten to withhold money and support from the hospitals, would be “irresponsible.”

Failure to comply with the news restrictions could result in a fine, arevocation of a business license, or other “court-imposed penalties,” and treated as a “misdemeanour.” Local officials, along with the “State COVID-19 Enforcement Taskforce” are to enforce the orders. Referring to this, Bianco described the position as a tactic to “shift attention” from Newsom’s “do as I say not as I do attitude,” by instead “turning public opinion against California sheriffs.”

“I believe that all jobs are essential to someone,” Bianco said in response. “Leaders do not threaten, attempt to intimidate of cause fear – bullies do.”

Despite Newsom’s threat of withholding state funding in retaliation for non-compliance with his lockdown, Bianco is not the only sheriff who is making a stand for personal liberties. Orange County Sheriff Don Barnes gave a statement the day after Bianco, in which he said “Compliance with health orders is a matter of personal responsibility and not a matter of law enforcement.”

Orange County officers would not respond to calls to “enforce compliance with face coverings, social gatherings, or stay-at-home orders only,” but only calls dealing with “potential criminal behavior and for the protection of life and property.”

Whilst urging personal responsibility about spreading the virus, Barnes also added that “policy makers must not penalize residents for earning a livelihood, safeguarding their mental health, or enjoying freedoms.” In a similar vein to Bianco, he called Newsom’s directive to law enforcement officials, regarding lockdown compliance, “disingenuous.”

Earlier in the year, Barnes made the declaration that he would not become “the mask police,” saying that he trusted Orange County residents to act as they saw fit.

Californians to protest at home of L.A Mayor who banned ‘non-essential’ walking