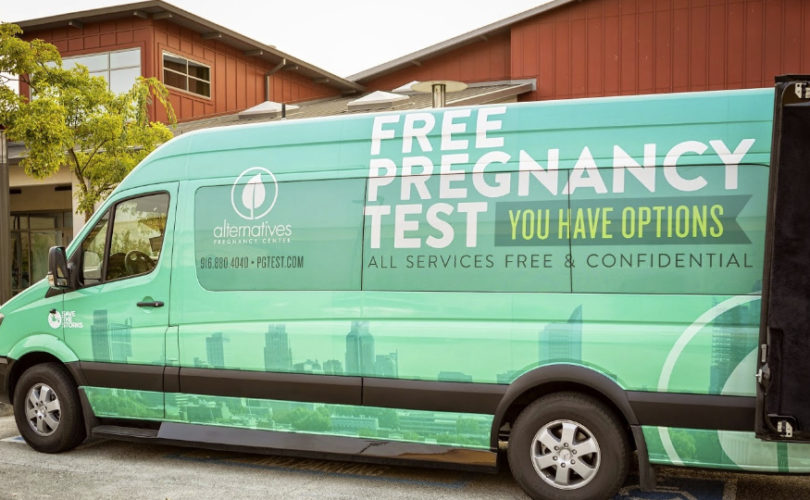 Sacramento Life Center and Alternatives Pregnancy Center are being attacked by NARAL Pro-Choice California for not posting newly required signs telling women where to get an abortion.

California Assembly Bill 775 (A.B. 775), passed last year by the Democrat-controlled California legislature, forces faith-based organizations that provide counseling or other help to pregnant women to put up a poster (at least 8.5 by 11 inches with at least 22-point type) “in a conspicuous place” announcing where to go for abortions.

Any pro-life pregnancy center or faith-based family counseling center that does not promote abortion by putting up the poster (or give a similar pamphlet to every woman entering the center) is to be fined a shoestring budget-crippling $500, then $1,000 for “each subsequent offense.”

The new law went into effect January first, and NARAL is out in force to push for compliance.

Similar coercive pro-abortion laws have been struck down when challenged in court, and over 110 organizations have challenged the new California law, led by the National Institute of Family and Life Advocates, represented by the Alliance Defending Freedom.

“NARAL tried the same thing here in Austin, where we filed a lawsuit, and they were soundly defeated when the ordinance was found to be unconstitutional,” Texas Center for Defense of Life's President Greg Terra told LifeSiteNews. “These ordinances [and] laws are unconstitutional forced speech that are unnecessary and are absolutely intended by NARAL to harass pregnancy resource centers.”

“The icing on the cake was that the liberal judge awarded $460,000 in attorneys' fees to a bunch of pro-life lawyers!” Terra added.

“I applaud the centers in California for not posting these signs, the messages which violate their principles and mission,” Terra concluded. “These frivolous measures will be soundly defeated in the courts wherever they are initiated, but we will be more than happy to collect attorney's fees from the pro-abortion groups sponsoring them.”

Alliance Defending Freedom senior counsel Matt Bowman said the new law “forces pro-life centers to recite the government's message.” He explained, “These centers are faced with an impossible choice – either refer women to have a child killed or face punishment by the state of California.”

Attorney Megan W. Fera, who represents Alternatives Pregnancy Center, told LifeSiteNews, “This law forces private, religious pregnancy centers to post the telephone number clients can use to obtain an abortion. This requirement violates clinics' freedoms of speech and religion by forcing them to advertise the government's pro-abortion message against their consciences.”

Ms. Fera explained, “Clinics like Alternatives Pregnancy Center exist only to provide life-affirming alternatives to abortion, in accordance with their Christian beliefs. Advertising abortion goes directly against their mission.”

“This type of law has been struck down in at least three other states, and I'm confident it will be struck down in California too,” Ms. Fera concluded. “Until then, Alternatives Pregnancy Center has been forced to post the required notice in order to avoid the heavy fines that can be attached for noncompliance.”

“We must be greatly impacting the abortion industry's business for NARAL to harass us so much,” Marie Leatherby, executive director of Sacramento Life Center, told LifeSiteNews.  “A.B. 775 truly is a Bully Bill, contrary to our very existence as an organization.”

Ms. Leatherby said that for NARAL “to call us dangerous and misogynists, when all we do is help women with their pregnancies, shows that they are the ones with the extremist views.”

“We are grateful to all those who support pregnancy centers and clinics and the valuable life-saving work that we do,” Ms. Leatherby said. “There are thousands upon thousands of happy and grateful clients who received compassionate care from a pregnancy center.”