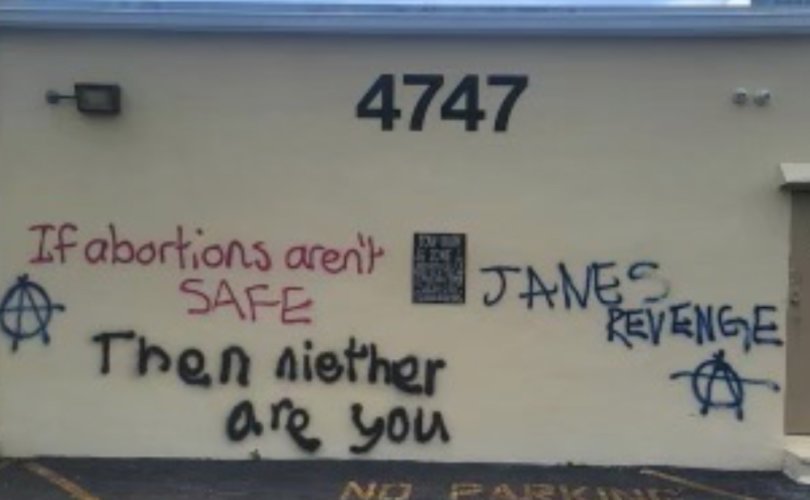 RIPON, California (LifeSiteNews) – The diocese of Stockton has put out an “urgent memo” warning that  pro-abortion activists have threatened violence at 8pm tonight, the night of the ruling striking down Roe v Wade.

The memo notes that the diocese spoke to an agent at the the Department of Homeland Security who informed them that nationwide intelligence reports warned of “extreme violence against Catholic churches and pregnancy centers” beginning at 8pm on the night of the Supreme Court decision in the Dobbs case striking down Roe v Wade.

The DHS agent noted that “large groups with cells nationwide have already been discovered ‘casing’ parishes.” The diocese issued a “critical notice” to all clergy, parishes and staff to develop a plan for security.

Jane’s Revenge, the terrorist group which has claimed responsibility for firebombing and defacing dozens of churches and pregnancy centers in recent weeks, issued this call for a “night of rage” beginning at 8pm tonight. The message, first put out May 30th read: “We need to get angry. We need the state to feel our full wrath. We need to express this madness fully and with ferocity. We need to quit containing ourselves. We need them to be afraid of us.”

On the night the final ruling is issued——a specific date we cannot yet predict, but we know is arriving imminently——we are asking for courageous hearts to come out after dark.

We have selected a time of 8pm for actions nationwide to begin, but know that this is a general guideline. There may be other considerations involved in planning time and place. We do not claim to speak for every community or crew. We are simply calling out to you. And we hope you answer our cries.

A June 14th message from the same group gleefully claimed responsibility for the attacks on churches and pregnancy centers in many locations, saying, “We have demonstrated in the past month how easy and fun it is to attack.” The group also warned that the firebombing and graffiti was not enough. “We promised to take increasingly drastic measures against oppressive infrastructures. Rest assured that we will, and those measures may not come in the form of something so easily cleaned up as fire and graffiti,” read another communique from the group.