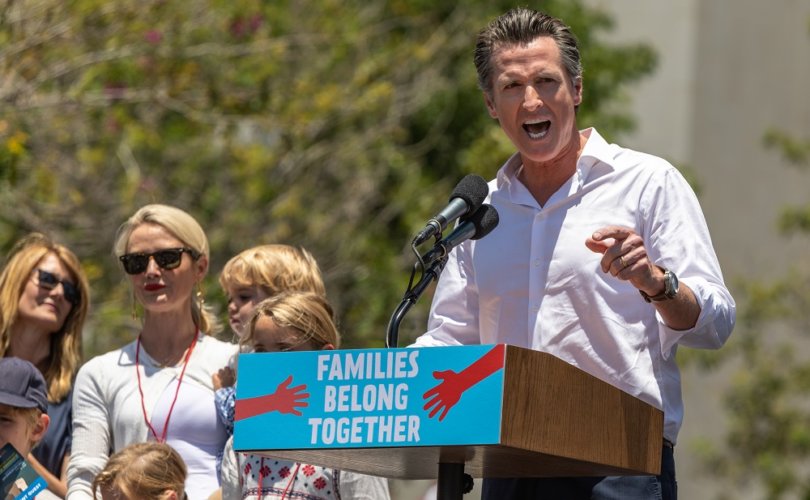 SACRAMENTO, May 21, 2019 (LifeSiteNews) — After offering a $100 million subsidy for “reproductive and sexual health care” that includes $10 million specifically for abortion in the state budget, California’s Gov. Gavin Newsom (D) proclaimed his administration’s commitment to abortion and contraception in the wake of new pro-life laws in other states.

Stopping by in San Diego during his statewide “California for All” tour to herald his budget and policies, Newsom spoke at a labor union office on May 18, denouncing pro-life bills in states like Alabama. “This is about control, that’s what it’s about,” Newsom said while repeating radical feminist interpretations of the motivation behind pro-life legislation. “It’s about control, it’s about patriarchy, it’s about going back to a time we don’t want to go back to, and we will fight and we will defend women’s rights. We will defend our families,” said Newsom, a cradle Catholic.

So we will step up. We will raise our voices. And we will fight. pic.twitter.com/yQyi6iaqIe

Around 150 supporters showed up at the United Food and Commercial Workers union office to hear the governor, wife Jennifer Siebel Newsom, and Assembly member Lorena Gonzalez (D), as well as representatives sent by Planned Parenthood. Many attendees at the rally wore pink shirts bearing the message “I Stand with Planned Parenthood.”

The state budget Newsom proposes would give subsidies to some families to help pay for health care. The proposal would also expand its Medicaid health care coverage to some illegal aliens between 19 and 25 years of age. Also, California residents who do not have health care insurance would be forced to pay a penalty.

Alabama, Georgia, Kentucky, Mississippi, and Ohio recently approved bills that forbid abortion for unborn babies once there is a detectable heartbeat, except in certain circumstances. In response, Newsom said at the rally, “Let’s just pause. If you have a 12-year-old daughter that’s raped by somebody at knifepoint, that may have HIV or AIDS or Hepatitis C, you’re telling that 12-year-old, your daughter, your loved one — they’ve been raped by their uncle, and they have to bring that baby to term? How dare they?”

The Alabama bill, for example, bars abortion once a fetal heartbeat can be detected, unless a physician determines that it is “necessary in order to prevent a serious health risk to the unborn child's mother.” This would include “serious mental illness” on the part of the mother. Abortion is also permitted in the case of a “lethal anomaly” in the unborn child. Heartbeat bills passed by other states have similar exceptions.

Following the governor’s lead, California Democrats are making good on their vows to further extend abortion. In the state capital, the California state Senate passed a bill on Monday that requires all public universities to provide abortion-inducing drugs at student health centers. Once it is passed by the state House, the bill will likely be signed by Gov. Newsom. The sponsor of the bill, state senator Connie Leyva (D), said in a statement that medication abortions are needed on campus because “women’s rights, particularly access to abortion, are under attack” across the U.S.

Coming just days after Alabama Gov. Kay Ivey (R) signed the country’s strongest pro-life bill into law, Leyva said: “While other states are taking a giant step back to the days of outright misogyny and forced pregnancy, California continues to lead the nation by reaffirming the constitutional right to access abortion care without delay, including at student health centers on public university campuses.”

If passed, the “College Student Right to Access Act” would be the first of its kind in the country. According to the Sacramento Bee, the bill would cost taxpayers about $7.8 million per year from 2019 through 2023 and cost about $3.3 million thereafter.