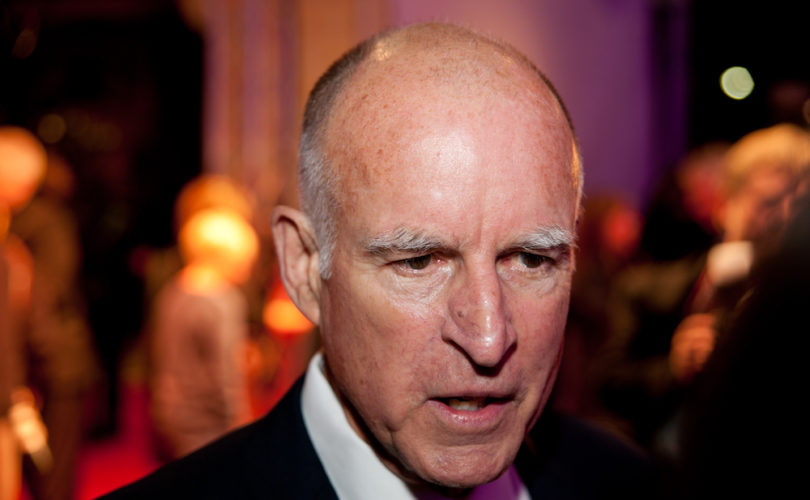 SACRAMENTO, CA, October 12, 2015 (LifeSiteNews) – Just days after signing a law to allow assisted suicide, California's Catholic governor is forcing pro-life pregnancy care clinics to provide information on how to obtain abortions to women who come to them for help.

Governor Jerry Brown signed “The Reproductive FACT Act” on Friday. The law forces pro-life clinics and medical clinics licensed by the state to tell women where to obtain abortions. Additionally, a document with this information is to be posted and/or distributed at the clinic.

According to the law, the document must say: “California has public programs that provide immediate free or low-cost access to comprehensive family planning services (including all FDA-approved methods of contraception), prenatal care, and abortion for eligible women. To determine whether you qualify, contact the county social services office at [insert the telephone number].”

Additionally, pro-life centers that don't provide medical services must post signs in two “clear and conspicuous” locations, saying, “This facility is not licensed as a medical facility by the State of California and has no licensed medical provider who provides or directly supervises the provision of services.”

Heartbeat International President Peggy Hartshorn, who oversees a massive network of 1,800 affiliated pregnancy help locations, maternity homes, and non-profit adoption agencies, decried the measure as “nothing short of a state-sponsored attack on women by the highly profitable abortion industry.”

A lawsuit was filed on Saturday to strike the law. Pacific Justice Institute filed the lawsuit on behalf of A Woman's Friend Pregnancy Resource Clinic and Crisis Pregnancy Center of Northern California in Redding, which both offer free pregnancy testing and consultations.

The portion of the law forcing non-medical pro-life centers to post notices is similar to those passed in municipalities across the country, but which have not fared well in court.

A previous LifeSiteNews investigation found that NARAL had colluded with officials in Montgomery County, Maryland to push a similar ordinance, only to have multiple judges declare it unconstitutional.

Pro-life clinics have made legal progress against a similar measure in Baltimore, Maryland. However, a judge in San Francisco upheld the language, which is only required of pro-life clinics and not their pro-abortion counterparts.

A number of municipalities have used reports from NARAL Pro-Choice America, allegedly based upon “undercover” investigations, to claim that pro-life clinics lie to women.

However, no evidence outside of unsubstantiated written claims were presented in the Montgomery case, leading the Clinton-appointed judge who ruled in favor of the pro-life clinic Centro Tepeyac to observe that the people who accused the centers of spreading “misinformation” were “universally volunteers from a pro-choice organization sent to investigate practices” at the centers.

NARAL’s president, Ilyse Hogue, praised Brown's signature, saying that “anti-choice crisis pregnancy centers are ground-zero in the fight for reproductive freedom, and Gov. Brown and the California legislature can be proud of leading the first successful statewide effort to ensure that no woman is tricked into walking through doors of a CPC to be manipulated and shamed again.”

The Washington Times quoted critic Shannon Grove, a GOP California Assemblywoman who argued against the bill. “Does the government have a right to tell a newspaper what to write, a preacher what to preach, a private school what to teach? Of course not,” Grove said. “So why is it okay for the government to force pro-life pregnancy centers against their will to advertise and promote government abortion services?”