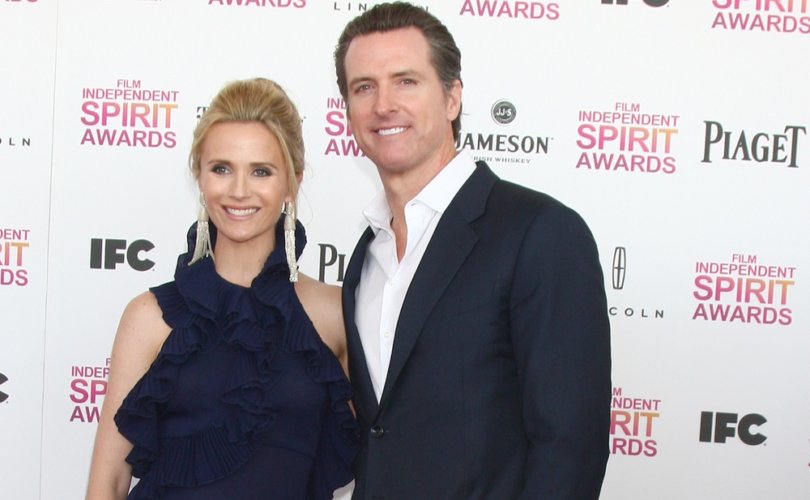 SACRAMENTO, California, January 8, 2019 (LifeSiteNews) – The wife of newly minted California Gov. Gavin Newsom (D), Jennifer Siebel Newsom, announced on the governor’s official website that she will be known as “first partner” instead of the traditional “first lady.” “First partner” Siebel Newsom is an actress and activist who has made two documentary films in a trilogy on gender.

The former Republican, who is now registered as an independent, released “Miss Representation” in 2011, which examines whether media contribute to supposed underrepresentation of women in positions of influence. In 2015’s “The Mask You Live In,” Siebel Newsom probed traditional definitions of masculinity and whether they are harmful. Both of the films were featured at the Sundance Film Festival. A third film, “The Great American Lie,” is in progress.

“We're going to have a female governor someday soon,” Siebel Newsom told Politico during the gubernatorial campaign. “I think that [the title] partner is kind of cool because also it opens the opportunity for any couple to step in and that’s exciting to me.”

Siebel Newsom founded The Representation Project, which uses “film and media as catalysts for cultural transformation.” It serves as a platform for social media campaigns and political activity.

She has rallied with abortion chain Planned Parenthood; her husband is also vocally pro-abortion.

Gov. Newsom and Jennifer Siebel married in 2008 and have four children. Gov. Newsom, who was raised Catholic, was previously married to Kimberly Guilfoyle, a former San Francisco prosecutor and Fox News commentator. Guilfoyle is now dating Donald Trump, Jr., who is also divorced.

Gov. Newsom has said he supports a bill forcing all state universities to dispense abortion drugs to students. His predecessor, ultra-liberal Jerry Brown, vetoed it, but it may be reintroduced in the state legislature.